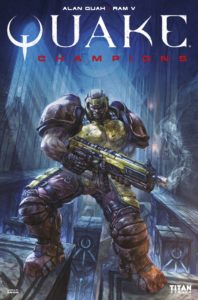 Two decades ago, a lone Marine stepped through the Slipgate and into a world of nightmares. Trapped in these realms ever since, time and delirium have eroded his resolve and even his name.

Now, that same Marine finds himself wandering a strange but familiar landscape, where grim fighters from the far reaches of the hellverse battle through monstrous dimensions in search of subsitence and salvation.

Trained to kill, scavenge, survive and locked in a never-ending gauntlet of bullets and bloodshed, only one of these Champions shall prevail…
———-

As with many video games, the job of wringing a comprehensive story out of something like Quake makes getting water out of a stone seem downright plausible. No disrespect at all to one of the pioneers of the First Person Shooter genre, but let’s be honest. The story behind the game is the barest of plot threads, with no real purpose beyond giving a player the motivation needed to push through thirty levels of gameplay. The long and short of it is that the game’s protagonist, Ranger, has to fight through four “episodes”, each divided into its own series of levels. As each episode is successfully completed, the player collects a magic rune. When all of the runes are collected, the final level opens up and the epic shootout against Shub-Niggurath begins. Failure means that the final boss’s evil forces will have nothing to stop them from sweeping through the Slipgate and into our world. Game over.

As far as most of the original first person shooters goes, that story right there is fairly comprehensive. Anyone who’s played any of the classic shooters (Quake, Doom, Duke Nuke’em, etc) knows that the “lather, rinse, repeat” formula of the game transcends the need for a deeply layered, cohesive story. Not to abuse the words of Shakespeare, but “the play is the thing”. These games are all about shooting stuff, blowing stuff up, and pretty much just creating as much chaos and mayhem as possible without getting fragged. It’s not a dig, because anyone who’s ever spent countless hours in front of a screen, running and gunning, you know that the fun isn’t necessarily in the plot. If you can pull off a truly impressive “killing spree” in front of an appreciative audience, you can ride high on the wave until your next death.

So how does Ram V take that most basic formula (“Shoot, Reload, Repeat”) and make Quake the comic something more than a gratuitous gorefest? He brings the focus down to its main character, Ranger, to explore his deeper motivations and drives. The gamer doesn’t really care about Ranger or his past. He’s a cypher, a blank slate that serves no purpose besides that of empty vessel for a player’s vicarious thrills. Translate that concept into a story, make Ranger a soldier determined not to become the mindless killing machine, and you’ve got something a little more interesting. It also doesn’t hurt that Ram V has spent more than his share of time in front of the aforementioned TV screen, gaming system running hot, and shouting “fortune favors the brave!” at the top of his lungs (okay, maybe not that last part, but check out the intverview after my review for a look at the man’s gaming cred…).

Ranger has been stranded in the never-ending maze of Quake’s battlegrounds, fighting one enemy after another for two decades (fun fact: Quake hit the video game scene in 1996). In that time he’s killed and died more times than he can remember, and he’s begun to lose track of himself. The only thing preventing him from losing himself completely is the lingering memory of Annie, kept alive in the image of an old photograph kept tucked away in Ranger’s armor. As long as he can hang onto the photo, and the whisper of Annie’s memory, he can hang onto that one little piece of himself that knows why he needs to get back home.

See that? With the simple inclusion of a beat up old Polaroid picture, the tried and true device by which fictional soldiers have built and maintained a connection with readers since the dawn of time, we’re given the foundation on which actual stories can be built. Oh yeah, and Ranger runs around shooting stuff too… What, you thought a Quake comic book was going to be lacking in the violence department?

Fear not, faithful reader, for Alan Quah and Sean Lee have ensured that the bones of Quake remain. Also the brains, eyeballs, and sprays of bodily fluid. There are carnage filled shoot outs aplenty, with the promise of many more to come, all rendered and looking like they could have stepped right out of the game’s classic levels. Which now addresses the biggest challenge for a comic book artist: taking the inspiration of the visually dynamic medium of a video game, and translating that to static pictures on a page. Make that video game a beloved classic, one that’s held its appeal over the course of decades and through a series of sequels, and an artist would have to be one ballsy bastard to take it on. Folks, it looks like Quah and Lee are those ballsy bastards. Whether Ranger is going one on one against the likes of reptilian warrior Sorlag or robotic juggernaut Clutch, or diving headlong into a sea of demonic horrors out to devour his flesh, the artistic team works hard to capture the epic spirit of Quake.

Old school fans of the FPS genre will want to take a look at this title, if for no other reason than to round out their sense of completion after hours spent battling Shub-Niggurath and its Lovecraftian hordes. Quake Champions is off to a promising start, with its hints of deeper character development doing nothing to besmirch its humble beginnings.

Now, if you’re still hanging around to see if there’s some kind of MCU end credits scene… there actually kinda is! Check out this quick, informal interview with writer Ram V, in which the subject of 70’s & 80’s television shows doesn’t even come up once…

Paul: What makes a writer decide to tackle something like a video game property?

Ram: Just a matter of interest, I suppose. I’ve been a gamer for as long as I can remember. I mean, I’ve been at it since Wolfenstein, DOOM, Quake I. I still remember playing the original Double Dragon and Contra on my Nintendo. I’ve played all the early MMOs and then World of Warcraft. I’ve toned down on the multiplayer stuff, since. But I still dabble every now and then. My PS4 is always on! As I’ve gotten older, I appreciate games for different things. One of them is the story.

So, games have always been close to my heart. When Titan got in touch and asked if I wanted to work on a video game property, I really didn’t have to think about it much. I said, ‘which one?’ my editor went, ‘Quake!’ I said, ‘When do we start?’

Paul: Historically, it’s probably one of the more hit or miss propositions, and with Quake there really isn’t a whole lot to go on. Does that make it tougher, having to flesh out so much in order to get a story out of it, or easier because you do have so much room to work in?

Ram: Historic considerations really didn’t figure in my thoughts. I’m having fun and as long as that’s true, I’m game for anything. Yeah, the early Quake stuff wasn’t very rich in story but you’d be surprised how much there is behind the scenes. It takes from the Lovecraftian mythos and that’s fantastic source material to work with. It provides a unique challenge while being exciting.

Because you don’t have a lot of material to go on, you have to be careful how inventive you get with the current story. It all has to tie in to bits and pieces from the 1996 game. So you’ll see a lot of that in Issue 1 and you still have to figure out a way to make it human… something everyone can care about.

On the flip side, because there isn’t much, especially with characters who haven’t really had their own screen-time, I get more of a free reign. And, because we’re doing character backstories, I get to switch genres from action and sci-fi to Lovecraftian horror. I’ve found that to be a total thrill!

Paul: I get it… you’ve got history with Quake so I can see how that’d make it more entertaining for you to dive into as a writer. Does that background help you pinpoint things in the lore that, as a gamer, you’ve always wanted to dig into a little more deeply?

Ram: With Quake, as I said, there wasn’t much in terms of lore that was foregrounded in the original games. Still there are a few moments that were fun to tie into. And the Quake Champions characters now have abilities and powers that are a direct result of their actions in the earlier games so that was fun to work with, yes!

Paul: Story wise, you’re looking to explore more of the Lovecraftian angle. Do you hope to carve out a niche’ in the sci-fi/horror comic?

Ram: Without giving much away, since were doing backstories of individual characters, the genre jumps around quite a bit. So, if anything, I’m getting a chance to really spread my wings in terms of genres as I work on the books.

Paul: What’s your game of choice right now? (I’m terrible with finishing games, but currently I’m in the middle of Horizon: Zero Dawn)

Ram: Yeah same, actually I’ve been playing the x-pac for Horizon: Zero Dawn. I love a well made RPG. I’m also playing The Forest – big survival horror buff. So that game’s been a lot of fun!

Paul: Last question and then we’ll put this one away. What’s the one gig that you’d like to do, the dream job by which all other writing jobs pale in comparison (and if Quake was it, you’re gonna have to lie and come up with something else)?

Ram: I get asked this a lot. When I started out, I got into comics wanting to write Hellblazer, the old one. Then, a month into writing my first ever script, Hellblazer was cancelled. Since then, I don’t have dream gigs, only projects that excite me. And, of those, there are many. There are of course, projects I’d jump at. Everyone has those. But it’s the writing and storytelling opportunity that excites me more than an IP. There have been more opportunities presented to me than I would have thought possible, this early in my writing career. So, as far as I’m concerned, I’m flipping out over them all!

Paul: And anything else you’d like to get out there for the tens of Pullbox readers? Anything at all… birthday shout outs, cuss out the guy who cut you off in traffic the other day? You call it, and it’s done.

Ram: Yes, of course! I want to shout out to the guys back at the White Noise Studio. Ryan O’Sullivan, Dan Watters, Alex Paknadel– I’m a better writer/creator because of them. We’ve all got some pretty big things brewing. Some of them you’ll hear about pretty soon! Very exciting time. So, watch this space!

Now, fire up the old (enter name of classic gaming system of choice) and get the ol’ juices flowing… Then check out Quake: Champions, from Titan Comics, Ram V, and Alan Quah! 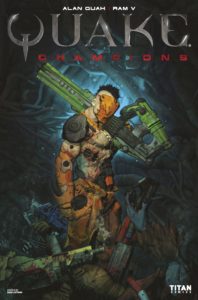 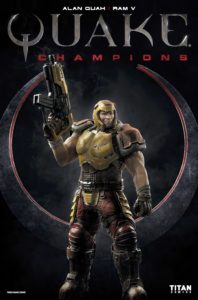 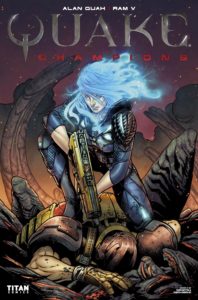 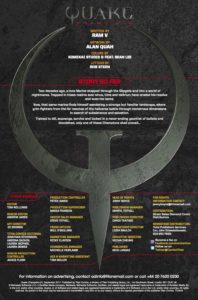 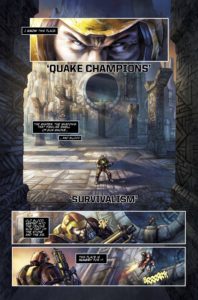 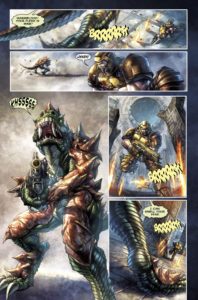 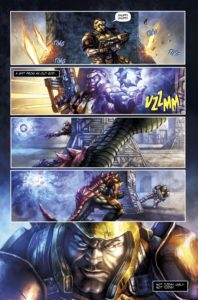 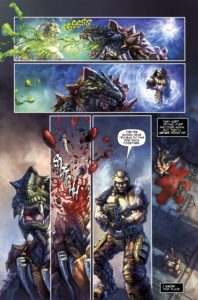