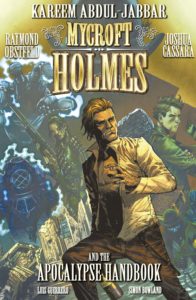 This all-new graphic novel collecting issues #1-5 of Mycroft Holmes: The Apocalypse Handbook presents brand new comic adventures set in the world created by the author of the best-selling Mycroft novel series, and is perfect for fans of Mycroft Holmes and Sherlock Holmes.
———-

“I read the Conan Doyle stories during my rookie year in the NBA, and was fascinated by Holmes’ ability to see clues where others saw nothing. I was intrigued by his ‘older, smarter brother’ who was involved with government at the highest levels. Here’s hoping we did him justice.”
– Kareem Abdul-Jabbar

In a case of “well laid plans”, the noted futurists of the time (Mark Twain, Jules Verne, Mary Shelley, among others) gathered together to compare ideas, and ultimately bring those concepts to life. The blueprints, referred to as the Paradise Papers, have been corrupted into plans to produce weapons of mass destruction far removed from their idealistic origins. These plans, collected into what is now the Apocalypse Handbook, have been stolen. The esteemed British Museum falls victim to a devastating attack, its main hall destroyed and over two hundred people killed. The weapon used is as far beyond conventional explosives as one young Mister Holmes is beyond most everyone else.

Now, with England at the heart of a theft that could change the landscape of the world, shiftless but gifted university student Mycroft Holmes is called on to solve a case that will lead him to the United States. There, he’ll meet a relentless collection of foes and allies alike, some new while others are vaguely recognizable, and confront his hidden past.

Readers of the original adventures of Sherlock Holmes know that he has an older brother who’s well-connected and fairly high up in Britain’s government. It’s also well known that Mycroft is, by some accounts and his own confident statement, the “smarter and cleverer brother”, but Conan Doyle never really went into detail on that account. He also left Mycroft’s younger days shrouded in mystery, maintaining the focus of his stories on Holmes the younger.

Along comes a young basketball player of some talent, and not lacking at all in ambition. Over the years, NBA legend Kareem Abdul-Jabbar has made himself something of an expert on all things Holmes, and his fascination with Mycroft in particular has led him in some surprising directions. First, he’s co-authored a best-selling novel titled “Mycroft Holmes” with Anna Waterhouse, which was released in 2015. Second, and maybe a little more surprising, is the comic book series co-written with Raymond Obstfeld and published by Titan Comics.

The story itself is pure Holmes, from the obscure scraps of knowledge tossed around like confetti, to the near invisible clues forming the trail for the title’s reluctant detective. The story gives some insights into Mycroft’s character, using flashbacks that reveal a person very different from the arrogant ass we would expect. Also explored with a little more detail is the early relationship between Mycroft and younger brother Sherlock. Where Conan Doyle was satisfied with showing the two interacting in their later years, with Sherlock making no pretense to the fact that he’d like as little to do with his brother as possible, Abdul-Jabbar has filled in some of the blanks to reveal possible sources for the angst. And he does it with total respect paid to the source material.

The artistic team of Joshua Cassara and Luis Guerrero has taken on the responsibility of the book’s visual details, and the effects couldn’t be better. These two have laid out a book that manages to come across fitting perfectly into the time the story’s set in. Cassara’s line work handles all aspects of the title, from the destruction of the British Museum in the opening pages, to the more dynamic scenes that displayed Mycroft’s more physical challenges. Adding to that, the color palette set up by Guerrero did a great job, somehow bringing old pulp magazines to mind. One very cool effect that stands out to me is the use of shadows, shrouding the story’s villains in mystery and menace.

Everyone involved in the book spent time and effort to populate it with some great characters, giving Mycroft (and Sherlock, in his brief guest appearance early on) some entertaining opportunities and challenges. Some of the more prominent guest stars include the likes of Jesse James and his band of outlaws, a monster right out of Mary Shelley’s masterpiece, and Queen Victoria herself. Other honorable mentions are the resourceful bounty hunter Lark Adler, daughter of an escaped slave and a Cheyenne maiden, and Kerry, a young girl left orphaned by the violent events following in Mycroft’s wake.

Fans of Sherlock Holmes, old and new alike are going to get a kick out of this oblique spin in the world created by Sir Arthur Conan Doyle. Kareem Abdul-Jabbar has taken his love of all things “Holmesian” and translated it into a story that should have made Conan Doyle, the man who brought deductive reasoning to the forefront of our collective consciousness, proud. 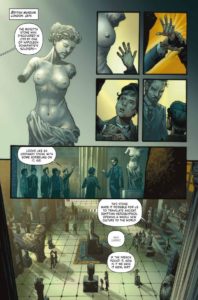 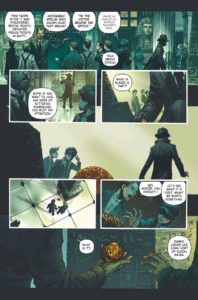 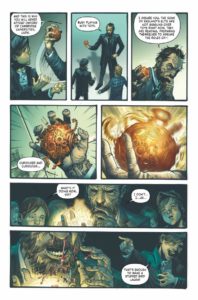 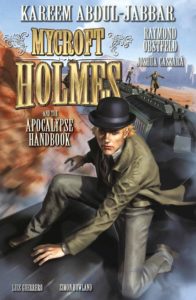