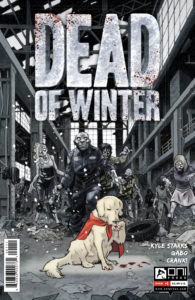 Based on the game by Plaid Hat Games

From the tabletop smash hit comes this new series starring beloved characters from Plaid Hat Games’ Dead of Winter, written by Kyle Starks (Sexcastle), and illustrated by GABO (The Life After). In the pantheon of heroes, none are more lovable and loyal than everyone’s beloved good ol’ dog, Sparky. Surviving in the wintery apocalypse of the undead, this former TV star turned zombie killing machine just wants to make friends and be a good boy. As his fellow survivors scavenge for supplies in the frigid wasteland, will Sparky be able to protect his companions from threats both undead and not yet undead?
———-

Not sure if you’re aware, but zombies are kind of the thing these days. Sure, there have been a slew of zombie movies coming down the pipe since the 70’s, thanks in large part to the late great George Romero, but there’s been a resurgence of late. With the popularity of The Walking Dead, both the comic series by Robert Kirkman and the television series it spawned, the zombie phenomenon seems to be going strong. One might wonder what it is that’s so fascinating about the concept of hordes of the undead stumbling around, trying to satisfy their never-ending hunger on the flesh of the living. Aside from its obvious shock value, one might think that the fad would have died off by now, like the vampire craze of a few years back.

First and foremost, the zombie apocalypse hasn’t had its version of Twilight yet (the movie Warm Bodies doesn’t count, cuz it was actually kinda decent). When that happens, the genre will have officially played itself out.

Still, you wouldn’t think that an ongoing story about zombies would hold anyone’s interest for very long, and that would be very true… if the stories that stuck were actually about the zombies. The good stories use the zombies as the backdrop while the real focus is on the survivors, and the best stories imbue their characters with realistic personalities and concerns. The whole thing becomes a character-driven piece on what people will do to survive under the most extreme circumstances. Comics like The Walking Dead and Mother Russia, as well as novels like World War Z (all outstanding examples of how awesome the genre can be), go beyond the shock value of human beings as food, and dig deeper into the meat…

So it is with Dead of Winter, a new comic series from Oni Press that’s based on a table top game of the same name, available from Plaid Hat Games. As in the game, the comic features a colony of survivors, all folk from different walks of life, diverse backgrounds, and individual motivations. Gabriel Diaz was a fireman, and he believes that to defeat the army of the dead, the living must stand together. Ruckus Burley is the quintessential redneck who just thinks that being able to haphazardly bash zombie skulls is a helluva good time. Arthur Thurston was a school principal, convinced that the more survivors Gabriel rescues and brings back to the colony are just adding more mouths to feed, where they should be concerning themselves with taking care of the people they have. Three very different personalities, each viewing the zombie apocalypse from their own perspective, and none of them completely right or wrong.

And then there’s Sparky the Super Dog (he’s a “good, good dog”). Sparky’s the former star of his own television show, and kind of a badass in his own right. Also he hates zombies, and he’s really good at putting them down for good. He could very well be the most interesting character of the bunch, if for no other reason than the fact that he seems to be compelled to help everyone in defense of the undead, regardless of mitigating circumstances. Plus, who doesn’t like dogs? No one that I’d want to associate with, I’ll tell ya that.

Kyle Sparks has crafted a story of survival against all odds, weaving in humor and oddly enough a bit of practicality (wait till they hit the drug store… there’s a plot point/fact of life that rarely comes up in zombie stories). He gives each of the characters a moment to say their piece in such a way as to make it difficult to argue with them. Honestly, I can’t fault Arthur at all for his more isolationist stance. He’s the defacto leader, has a lot of people that he’s responsible for, and is already stretching their available supplies to the limits. Then again, Gabe has a pretty solid viewpoint, holding every living being as worth saving and vital for overall survival. See, everyone has an argument to be made, and no one is entirely wrong. Okay, maybe not Ruckus. I’m not entirely sure what his moral outlook is, and he really seems to be having a little too much fun out there.

Rendering the world laid out by Sparks is the job of Gabriel Bautista, and he’s given us a great piece of work that stands a little at odds with the subject matter. His artistic style might almost seem to be more at home in lighter fare, giving everything a more cartoonish, “Adventure Time” sort of look. But I’ll be damned if it doesn’t work, and Bautista makes it work on multiple levels. In any given panel, the reader is given more than just one thing to pay attention to. While the humans are going through their exposition, Sparky is often doing his own thing in the background, and I had to wonder if he wasn’t trying to tell us something. It’s all handled in such a way that while the people are establishing their characters through dialogue, Sparky is doing it through action and he’s given as much development as anyone on two legs.

I’ve never played the game, but the comic has my interest piqued. The comic also has me very much looking forward to whatever comes next. If you enjoy character driven action stories that happen to have zombies wandering around in the background trying to eat people, there should be plenty to chew on in Dead of Winter.

If you like dogs, that’s just a bonus. We can be friends. 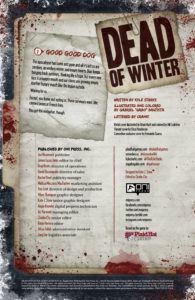 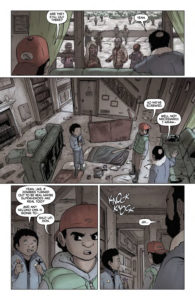 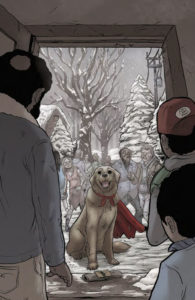 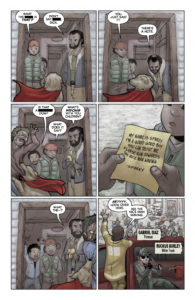 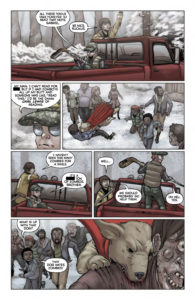 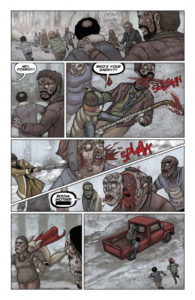 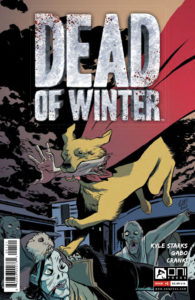