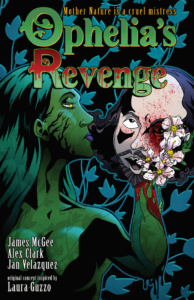 A scorned lover (with a flair for the dramatic) unleashes Shakespeare’s Ophelia, a vengeful spirit who wreaks bloody havoc on a modern-day Renaissance festival.
Overgrown with gore, violence, and dark humor, this comic is an homage to the cheeky, bloody horror popularized in classic anthologies like Eerie, Tales From The Crypt, and Vault of Horror. And of course, The Bard himself, William Shakespeare!
———-

In a production of Shakespeare’s Hamlet, young lovers Larry and Jean have fully embraced their characters. In the title role, Larry has known his own “slings and arrows” as he’s struggled to keep his lines straight. Jean, in the role of Ophelia, has professed her love for Larry, and much like her tragic character she comes to the painful realization that her affection isn’t returned. In her fury, Jean lashes out and invokes the wrath of another scorned lover, that of Ophelia herself. No longer satisfied with playing the love struck victim, Ophelia has become a spirit of vengeance, helping the cruel and the selfish along on their “steep and thorny way to Heaven.”

Having received a copy of Ophelia’s Revenge from publisher Red Stylo Media, the first thing that came to mind was what a cool and idea it was. Having experienced the off-kilter awesome that was Kill Shakespeare, in which the Bard’s creations get sick of their lives being left in ruins at the whim of their creator, seeing a title taking inspiration from Hamlet got my interest. With the tragic figure of Ophelia cast in the part of a vengeful spirit reminiscent of Sadako Yamamura (The Ring), invoked by the affectionate Jean, this one-shot story rises above other horror anthology comics.

First of all, before we get too much farther in, I just want to point out that I’m not a huge fan of horror comics. In comics, horror is a tough thing to pull off because I think it works best when it’s allowed to build tension. That’s not an easy thing to do in a two dimensional medium that doesn’t get the benefit of motion or a soundtrack. What works in Ophelia’s Revenge is that James McGee gets right down to the carnage without a lot of preamble, and he uses tongue-in-cheek humor to create a tone of satire. No, this isn’t really a story to take seriously. It’s a riff. What McGee does very well here is in his ability to convey a sense of comic timing… another thing that isn’t easy to do in a comic book. The humor helps offset the truly horrific images, crafted with apparent and demented glee by Alex Clark, and makes the whole thing more of a parable or fable. It’s the sort of scary story that you’d tell around a campfire, like the escaped mental patient with the steel hook for a hand.

I’ve mentioned some of the artwork by Alex Clark, and it’s worth mentioning that his style also serves to lighten the mood in what could have otherwise been an oppressively dark comic. Dark is fine, and can work great, but they are kind of a dime a dozen and tough to pull off in a one-and-done comic. Overall, Clark’s light and cartoony style plays very well with McGee’s script, and is in part responsible for nailing the book’s comedic timing.

Together, James McGee and Alex Clark have taken the original concept of Laura Guzzo’s- and boy, would I love to have been able to dip in on that conversation as it happened- and put together an entertaining yet cautionary tale of the insatiable nature of revenge. We’re given a classic and well-played concept that takes a huge step out into left field and makes the whole mashup work. There may not be many surprises in the story, aside from the “holy crap they did that!” moments, but do we really need them? People have been watching the Friday the Thirteenth movies since 1980, and I’m fairly certain we all know how those flicks are gonna end.

Books like this are why I’ve really come to love the fearless approach of indie comics. You’d never see one of the big publishers try something like Ophelia’s Revenge. It takes the “f**k it” mindset prevalent in the small publishers to commit to a book like this, and it’s that risk taking attitude that makes them deserving of notice.

“To have seen what I have seen, see what I see.” 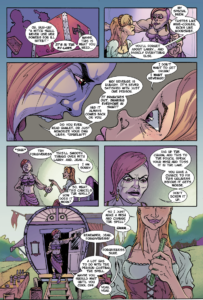 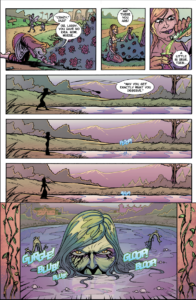