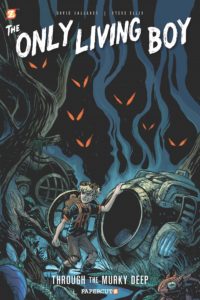 Through the Murky Deep

After the harrowing battle for the freedom of the patchwork planet ends in defeat, Erik Farrell finds himself exiled. Emotionally and physically broken, The Only Living Boy must now undertake an arduous quest to fulfill the dying wish of one of his greatest enemies.
———-

Young Erik and his best friend Bear continue their travels across the patchwork planet. At first, Erik was concentrating only on running away from the forces of Baalikar the dragon tyrant. Now, his motivations are concern for the friends that he’s found along the way. Having seen firsthand the devastation Baalikar brought against the hive city of the Sectaurians, Erik sets out to return to the home of the Mermidonians, believing them to be the next stop on Baalikar’s campaign of domination and destruction.

As Erik makes his way back to the aquatic city of Myrmidonia, he’s reunited with a few acquaintances. Kleef, the fearsome looking former prisoner of Dr. Once, is now a loyal friend looking to repay Erik for aiding in his escape. Erik also finds that bestial and primitive tribe, the Alku- who may or not have been trying to eat Erik the last time he met them- are in the market for a ruler and have settled on the one person who always seems to find himself at the center of the growing struggle against Baalikar. All in all, Erik’s travels across this bizarre and broken world have landed him in one pickle after another, and he’s evolved from the scared little boy always looking for someone to save him, into a perpetual agent of chaos looking to stir up some trouble. He’s made friends, he’s earned enemies, and he’s learned that being scared isn’t the worst thing there is. Now Erik is the one taking charge, riding the wave of great purpose and finding that it isn’t nearly as bad as giving his fate over to the hands of others.

I tell ya, one of the coolest perks I’ve found since starting this gig with thePullbox is being able to interact with the creative minds behind some awesome comics. Along those same lines, it’s always surprising when someone contacts me to take a look at their work. I’ve been at this for a bit now, and I still have a tough time thinking of myself as a “reviewer”… I just never grew out of reading comics, and now I get to actually talk about the ones I really like (whether or not any of you are actually paying attention to what I say is pretty much secondary). A while back, I stumbled across The Only Living Boy, said some stuff about it here, and was flummoxed when I heard back from writer David Gallaher. Now I’m one of the select and honored few (in my mind, at least) who gets an advance look at Erik’s graphic novel adventures before they come out.

From the start, The Only Living Boy has been about growth. In the beginning, Erik was just running away from pretty much everyone and everything. He had no goal, other than to get himself out of danger by any means he could. He was a frightened child who couldn’t keep himself out of trouble, who relied on the good will of others, and who seemed more than happy to hand over the reins to whoever would take them. If I’m being honest, Erik was kind of a whiner and not at all the most compelling character in the book. That distinction went to characters like Morgan, the Myrmidonian warrior born to a people of philosophers and pacifists; Kleeg, held prisoner and subjected to torturous experiments that left him both disfigured and terrifying; Thea, Sectaurian princess destined to succeed her mother, to rule their people while having no idea just how close that destiny might be. Now, going into the fourth entry in the series, Erik’s progression as a character and growth as a person is obvious. Instead of running toward anyone who might keep him safe, he’s charging toward danger to defend friends and allies. He’s starting to take on the responsibility of protecting the people of the patchwork planet he’s found himself on, for no better reason than because someone has to. Among the hordes of literary heroes, the ones who started out as the scared and helpless “Everyman” have usually been some of the most interesting, and with each issue of The Only Living Boy, Erik is solidifying himself among that group.

Adding to that, the artwork of story co-creator Steve Ellis brings quite a bit of cool to the table. With a multitude of races and environments to play with, Ellis has crafted a strange world inhabited by very different peoples. His character designs are unique, and no one seems to get lost in the shuffle. Best of all, at least in the mind of an old school comic fan like me, his action scenes move along very well, without the choppy awkwardness seen in less polished work. Ellis has put in his time, learning how to create interesting and dynamic characters, capable of grace and power even when they aren’t in motion. In case I haven’t been clear, The Only Living Boy is a great book based on its visual style alone.

Without a doubt, The Only Living Boy is a series geared toward younger readers. It moves along quickly, ignoring or rushing through events that don’t really need to be covered in detail, and some of the plot points might be a little obvious. That said it’s an ambitious world building story that hits all the notes of the “fish out of water” variety, with plenty of character development to satisfy finicky readers looking for depth.

Long story short, The Only Living Boy is a good time, and should have something for a variety of tastes and expectations. Great for some quality reading time for younger audiences, and totally readable for the adults who might be reading with them… 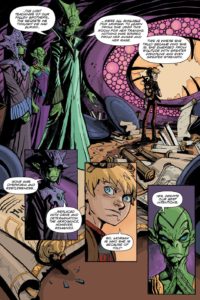 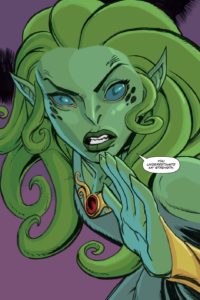 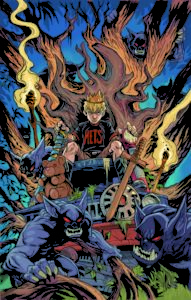