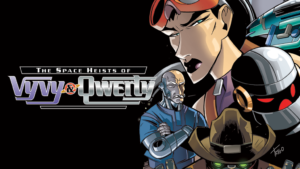 A brash thief roams the universe with her hyperactive robotic best friend until they find the one thing they can’t steal: a purpose.
———-

The adventures of space thief and smuggler Vyvy start off with, as would only be appropriate, a heist gone wrong. Having recently pilfered the phallic symbol of an alien god from a primitive temple on a backwater planet, Vyvy and robot companion QWERTY find themselves running for their lives. In hot pursuit are the spear-wielding reptilian tribesmen, angered at the outrageous theft of their god’s wooden genitals and determined to see his… honor… restored. Cue the banter and acts of daring do!

After a successful Kickstarter campaign, creator/writer Nial Presnall has been able to bring his inter-galactic sci fi adventure to two dimensional life. It’s a universe full of danger, and if that danger had a name it would be… Danger. What, I’m gonna start spouting clichés just because this comic read like an action movie serial from the forties? No, but I’m not gonna say that it wasn’t tempting. The pace and dialogue in the inaugural issue of what I hope can be worked into a regular series may be found guilty of its own clichés and convenient escapes, but those are forgivable. It’s a light-hearted action comedy, with a pair of lovable rogues in the titular characters, which moves right from its opening scene into the beginning of its opening story arc. And then into a bar fight.

Highlighting the action-oriented story is the sharp artwork from Trigo and Valladao. Trigo’s character designs are classic science fiction, with just the right touch of stylized flair. Valladao’s colors are bright and crisp, giving the book an overall look that makes it easy to follow along on the page. Having followed this book throughout its Kickstarter campaign, I was able to watch the progression of the art and style from concept to the final page. It’s been one of those peeks behind the curtain that I’ve really gotten to like since signing on with thePullbox as a reviewer.

Keeping in mind that this is the first issue in a hopeful series, its life is solely dependent on crowd funding. I was able to chat a bit with Presnall, and his joy at being able to put his very first ever comic book into production is tempered by the knowledge that now he’s gonna have to get to work on issue 2. With that in mind, give a follow to this creative team, as well as Vyvy & QWERTY themselves, on Twitter and Facebook. Keep an eye out for future announcements regarding issue #2, and hopefully this bright and fast-paced series can gain some momentum.

In general, The Space Heists of Vyvy & QWERTY is an homage to multiple genre greats. There are flavors of Indiana Jones and Star Wars, which were in turn tributes to the movie serials I mentioned above. There aren’t any red flags that might prompt parents to keep this title out of the hands of the impressionable youth (unless you’re worried your kids are going to grow up to be danger-prone space smugglers).

It’s an easy read that moves fast and left me wanting more. 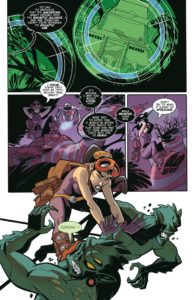 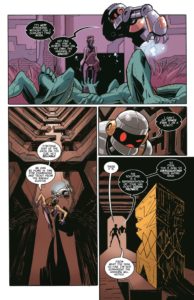 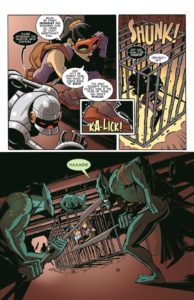 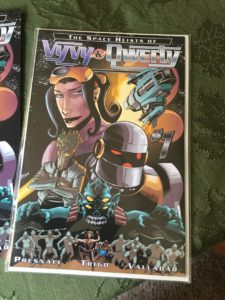