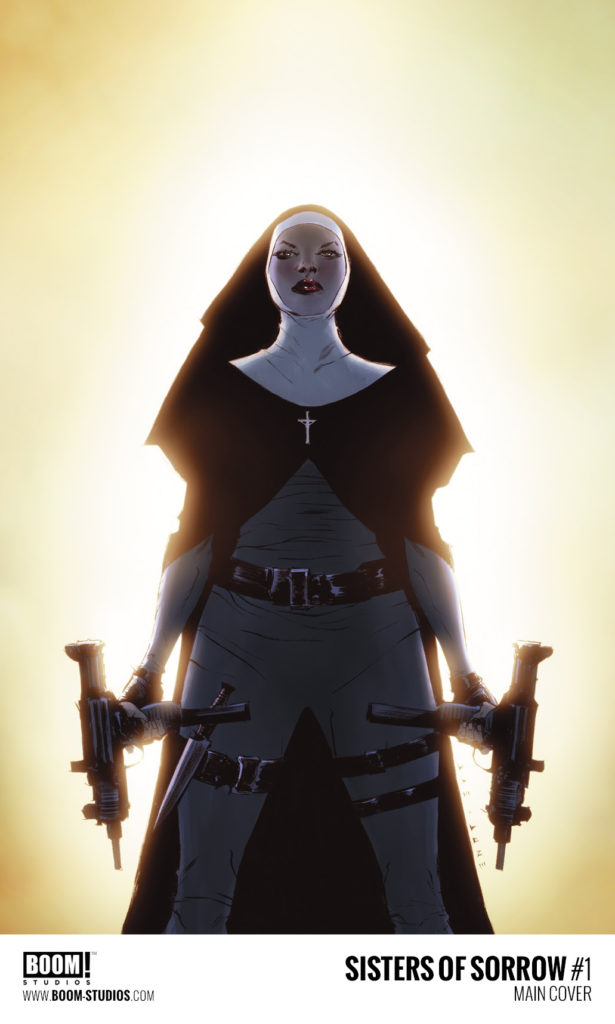 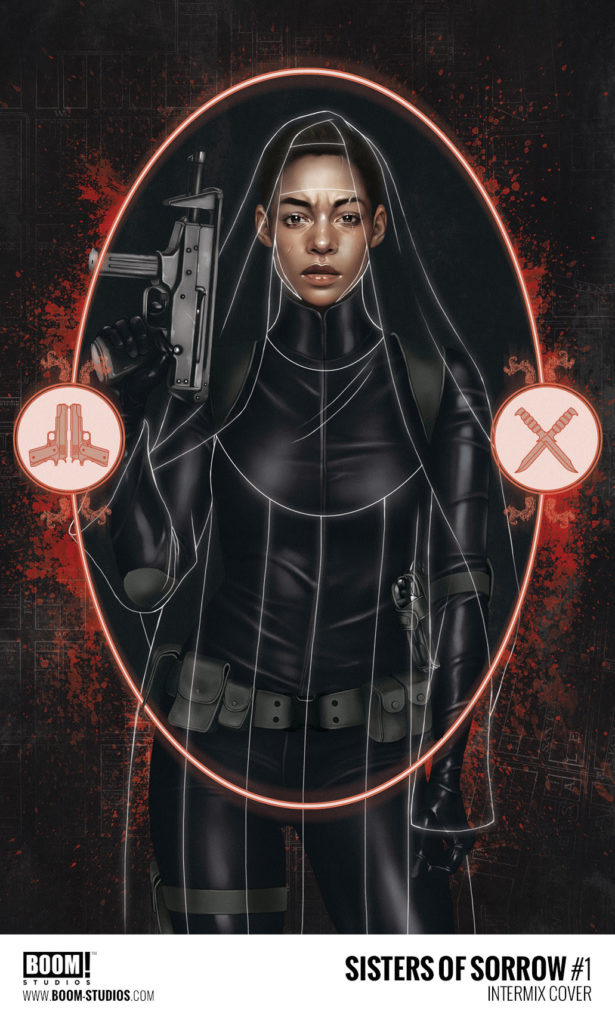 “I really love to f— with genre,” declares Sutter. “With Sisters of Sorrow we’ve created what presumably just looks like high camp and kickass action, but right below the surface, we reveal three-dimensional women, struggling with real-life abuse and the scars of deep emotional pain. At its core, weaved in and out of the action-packed narrative and amazing artwork, SOS is about abused women empowering themselves. We actually get to tell stories that matter. Like with SOA, it might be the flash of guns and leather that entice you to show up, but it’s the characters and their struggle that keeps you coming back.”

By day, Dominique, Misha, Sarah, and Greta run a nonprofit women’s shelter. At night, they each don a nun’s habit and move through Los Angeles hunting down violent abusers who have escaped justice. Their increasingly public vigilantism has earned them the nickname, “Sisters of Sorrow”—and has drawn the ire of L.A.’s notorious anti-crime task force.

“As a woman who’s experienced intimate partner abuse—and watched her friends deal with it as well—I can’t lie, Sisters of Sorrow is cathartic to write,” says Alameda. “And while I may personally identify with the issues that Dominique, Misha, Sarah, and Greta each face, I also believe the story of their crusade for justice will resonate broadly with readers, too. Who can say they haven’t secretly dreamt of meting out justice to their bullies or abusers? And as someone who grew up watching Westerns with her father, I love the way Sisters of Sorrow subverts the stereotypical vigilante tale and puts the power in the victims’ own hands. Dominique, Misha, Sarah, and Greta don’t need a man to save them—they can save their own damn selves.”

“The main focus of Sisters of Sorrow is that the female characters are antiheroes. Despite prior challenges in their life, they strive to overcome them,“ adds Kim. “As an Asian woman, it means a lot for me to work on a project like this since it defies the racial and sexual standards and expectations of society. It is a project that introduces harmony amongst female characters of different races, while presenting them as strong, individual women who strive to solve social problems.”

Sisters of Sorrow is the latest project Sutter has worked on with BOOM! Studios, having supervised original stories in the publisher’s hit Sons of Anarchy comic book series (including the current Sons of Anarchy Redwood Original title) and launching an original supernatural series, Lucas Stand.

Sisters of Sorrow #1 features covers by Jae Lee (The Inhumans, The Dark Tower: Gunslinger Born) and Andre De Freitas (Evil Empire). Print copies will be available for sale at local comic book shops (use comicshoplocator.com to find the nearest one) or at the BOOM! webstore. Digital copies will be available to purchase on digital book marketplaces, including ComiXology and the BOOM! Studios app.

For news on Sisters of Sorrow and more from BOOM! Studios, stay tuned to www.boom-studios.com and follow @boomstudios on Twitter.