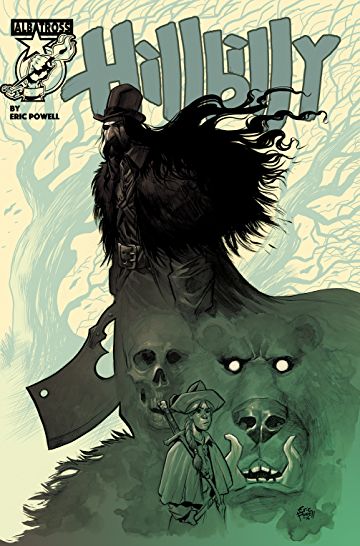 I’ve got to give a shout out this week to Eric Powell’s new(ish) venture “Hillbilly”.

“Hillbilly” might not be as fully realized as Powell’s “Goon,” but it does prove,

and I’ve said this before about Warren Ellis and Mike Mignola, even mediocre Eric Powell is superior to most folks best efforts, and certainly a shit ton more enjoyable and original than any mainstream book.

Like Ellis & Mignola and a handful of others, Powell just has a natural feel for what moves a good story along, he just gets what will draw the reader in.   Even though Issues #1-5 of “Hillbilly” were just average Powell outings, I felt I had to read them.  Then comes issue #6; BAM!  It was a full on, knock out, great read.  It was not just fun to read, but a privilege I think. It felt like I was sharing in one of those milestones in a creator’s career.   I felt the depth of the ease at which he grasped the emotional depth was something we hadn’t seen from Powell yet and it was so deftly plotted, it was storytelling gold.

Independent and small press oriented, Eric Powell has made a successful career out of maybe doing the unadvisable.  He is a low brow, dynamo of everything good about irreverence and problems with authority.  He is a champion of the little person (at least twice literally), and a clarion for the nobility of the ugly.  (Plus he is a cage fighter owner, roller derby sponsor, lives in Tennessee, and is a Green Bay Packer fan, all bonuses in my book… I am not a stalker).

If, somehow, Eric Powell hasn’t been on your radar, he is the creator, writer, artist of “Goon”;  if you have never picked up a copy of “Goon” you are missing out on one of the great comic book ‘greats’ of our time. “Goon” is more than just a depression era “street thug in world of monsters” it slides easily between exquisite humor, oozing pathos, horror and fart jokes.  There is nothing else out there like it.

Because, Eric Powell is a frickin’ comic book genius.  Self-taught by a bizarre convergence of Jack Davis, Bernie Wrightson and Norman Rockwell, he is probably the closest thing we have to a true heir of Will Eisner, despite other folk’s claims to the title.  The dude’s got 5 freakin’ Eisner Awards..

Eric Powell is steeped in the dark, coarse smut of the South, and then thrown into a copper kettle and distilled.   Powell is that uncertain bottle of bourbon sitting on the shelf, bursting with taste, a little on the harsh side of smooth, with that slight aftertaste of a little f-ed up.

If you haven’t already, it’s time to pull it off the shelf, dust off the cobwebs, and have a swig.  I recommend slamming a few.