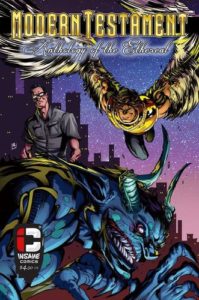 An angel, a demon, and a Horseman of the Apocalypse: these beings, although ancient and iconic, struggle to be understood and find their place in today’s society. Humanity has changed since their creation, and they along with it. But together we’ll chronicle them on their journey through tales of self-worth and purpose. They’re stories of discovery we’re currently writing everyday in our very own Modern Testament.
———-

Issue 1 of Modern Testament was one of my C2E2 purchases, and although I only picked up the first issue (three are currently available), I figured I’d throw down some words after reading. First off, after chatting with creator/writer Frank Martin for a few minutes at the Insane Comics booth, I can honestly say that Modern Testament is a labor of love. He was eager to give me the rundown on his work, filling me in on how and why he’s put the title together the way he has. It was a great bit of insight, a peak behind the curtain, and it put some of what I read in the first issue into perspective.

Modern Testament is an anthology series. Now before you groan and click on to the next article (make sure you check out Susan’s take on KaijuMax… that comic is a twisted spin on the classic giant monster genre), I understand your hesitation. Anthologies are tough to get into because you never really have the time to get involved with any of the characters. As soon as you start to “click” with someone, you’re moved on to the next short story. I’ve always thought the same thing, and this is where my talk with Frank came to the rescue. In this book, every story is a glimpse at a being of Biblical import, with just enough of a spin that they don’t just come across as retreaded tropes. Also, the use of a different artist on every story, giving each short its own look, was a great way to keep them from blending together.

Fallen Angel introduces an angel, bitter and honestly just about sick of humanity’s crap. No matter what he does, how hard he works to defend and protect us, we always seem to find a way to take all of the Lord’s good works and shoot them right down the toilet. Can you blame him? We’ve all gotten really sick of our jobs, don’t even try to deny it. You do what you’re supposed to, every day and without fail, but you never seem to make headway. There’s always another problem to be solved, a co-worker leaving a mess for you to clean up, a hill up which you have to ice skate. So when you’ve hit the bottom of the workaday barrel, what does it take to get you back on track?

The Bad Guy brings us into the average daily activity of a demon. Instead of simply seeing evil at play, however, we’re treated to the demon’s own inner dialogue. He doesn’t see himself as a “bad guy”. He’s just a guy performing an unfortunate but necessary duty. According to him, evil is simply the darkness against which humanity can measure the light. Without evil, we wouldn’t even know what good was. We’d just be bumping around, unappreciative and oblivious to all the shades of gray we experience every day. You’re welcome.

Feast or Famine was, to me, the most interesting of the three shorts in the issue. We find an ordinary looking fellow coming home after some shopping. But it’s not his home he’s coming back to, and none of the food is for him. See, he’s the actual Horseman, Famine, and he’s sick of being ignored while he waits for his green light to start the Apocalypse. The other three, War, Pestilence, and Death, are all given a fair amount of respect in general, always active and at the forefront of humanity’s mind’s eye. We can’t look at a news feed without seeing the affects of War somewhere on the globe. Pestilence is all around us as diseases become resistant to our best efforts at controlling them. Of course, Death is always there… looming on our horizon, and there isn’t one of us who doesn’t shiver just a bit at the thought of our time coming up. But Famine? Too many people take for granted the ability to eat a full meal, to over-indulge in fast food, to toss down a late night snack, and Famine is taking it on himself to do something about that.

Give Modern Testament a look. It’s an interesting take on some of the things you might’ve heard about in Sunday School, and uses them to shine a light into the corners that not everybody takes the time to look into. 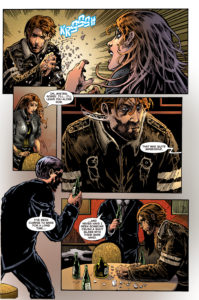 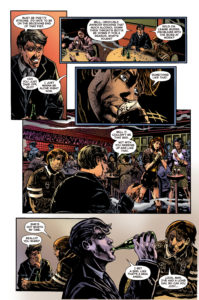 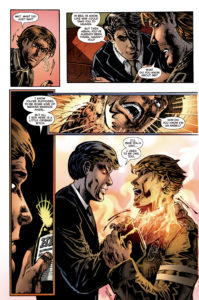