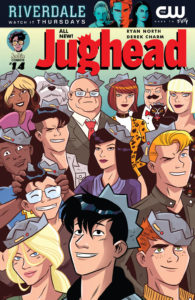 JUGHEAD #14, Archie Comics
When Juggie’s ruined everyone’s lives (BUT BY ACCIDENT, OBVIOUSLY) and also drawn the entire internet’s attention to Riverdale, can he fix it?  And how can a man who only wants to eat burgers in peace have caused such problems? All these questions and more are answered in this issue!
Derek Charm
Script: Ryan North
Art: Derek Charm, Jack Morelli
On Sale Date: April 5, 2017

Here’s the thing: Archie Comics are making a comeback or maybe they never really went away. It doesn’t matter. Here’s the part you didn’t know—especially if you have not been paying attention to the goings on in Riverdale— Jughead’s current series is good. Better than good.

Ryan North, the series’ current writer, makes comics that are a pleasure to read.  His work on Adventure Time proved his silly and irreverent approach to the comics medium can and does hold true the spirit of the iconic characters he’s taken on as his own. Jughead is still Jughead. Betty and Veronica are still Betty and Veronica. But North’s writing gives the book a vibe that makes Jughead just plain fun to read. Each page is a delight, full of Easter eggs, silly asides, and wacky extras.

In this particular issue, Jughead deals with the fallout that follows a viral video success, thrusting the Riverdale gang into the spotlight.  And drama ensues. Ultimately, the plot isn’t as important as the rich detail crafted into the storytelling.

The art’s great, too. Don’t get me wrong. The modern Archie characters work on a lot of levels and make Archie Comics much more approachable to today’s readers—but the real meat here is the delightful Ryan North scripts that lavish attention to character, comedy, and quirkiness.

Fans who have been looking for something to fill the Ryan North shaped hole in their lives since his departure from Adventure Time should spend some time with Jughead and friends.