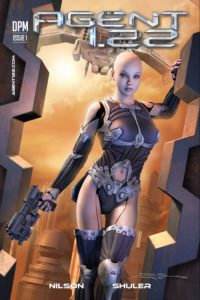 Agent 1.22 goes to Phobos to retrieve Project Vulcan from an outpost ravaged by the Tempest Virus. While there she must choose between the mission and a man.
———-

In the beginning, Lindsey Wordsworth was a young girl in love with Matt, a handsome scientist. Where some stories would present a romantic wedding proposal as an ending leading into “happily ever after”, Agent 1.22 has other ideas. In this case, we’re taken from idyllic romance to full on horror show as Dr. Henning (Matt?) wakes up from a nightmare to answer a priority call from a very high tech Mission Control, with a status report on a mission in progress…

Agent 1.22 has arrived, and is in orbit above the planet Phobos. Her mission is to retrieve high value data related to Project Vulcan, with all personnel involved to be listed either as expendable assets or obstacles to be overcome. As the Agent’s A.I. controlled ship Mnemosysne prepares her for action, she reviews an unauthorized transmission from Dr. Gabriel Perez, lead scientist on the project. Dr. Perez’s log details the events occurring after the station’s initial infection with the Tempest Virus. It was Perez who originally contacted the Agency for retrieval of the findings of Project Vulcan, before he himself was infected with the virus. With her mission parameters established, Agent 1.22 has to infiltrate the base, find and retrieve all data pertinent to the top secret project, and get out again. The survival of base personnel is to be regarded as very, very secondary.

There’s a lot going on here, and only parts of it are revealed- some only hinted at- in this opening issue. After a tragic accident, Lindsey is (we’re led to believe) transformed by (again, presumably) Dr. Matt Henning into the cybernetic Agent 1.22. Awakened only for the most dangerous and sensitive missions, she’s kept in a form of stasis until needed, her companion A.I. Mnemosysne on hand to dispense mission parameters and record her performance.

On the surface, Agent 1.22 is a simple and effective science fiction action story, which showcases some pretty impressive CG artwork. Incidentally, that artwork has shown a fair amount of improvement between the introductory issue #0 (reviewed by yours truly here) and this #1. The action seems a little more fluid here, characters a little less rendered and “stiff”. I can’t really think of a better way to put it, as the technical aspects of CG rendering are above and beyond my pay grade. Agent 1.22 is given a better range of facial expression as well, which only really matters when you consider the story that manages to peek out from under the very action-oriented surface.

Rather than presenting as a cold, emotionless killing machine, Agent 1.22 shows signs of remembering her origins as a living, feeling human being. These signs, shown as flashbacks, are presented without any real context, which works great as it allows the backstory to unfold for both reader and Agent at the same time. We’re not sure why Mnemosysne should be so concerned over fluctuations in 1.22’s vitals, or why the A.I. seems to be assigned to do all of 1.22’s talking for her. What we do know is that as Agent 1.22 breaks protocol and starts to go more and more off the rails, it’s shown as less malfunction and more the result of re-emerging humanity. Sort of a “Do Androids Dream of Electric Sheep”, only starting at the opposite end while still managing to head toward the same ultimate end… Awareness.

Both the format and the content of Agent 1.22 are well worth checking out, regardless of whether you’re interested in the eye candy on the surface or the deeper layers of story. As a project that seems to have been a long time in coming (my first look at issue #0 was way back in……. ), the combined efforts of Dheere, Panetta, Martin (creators), Nilson (writer), and Shuler (artist) comes across to me as a labor of love.

Which is, coincidentally, where I started this review… and on that circular note, I’m gonna quietly hit the “publish” button and call it a day. 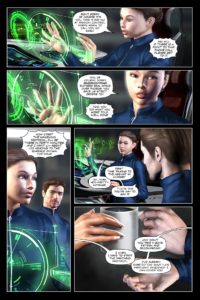 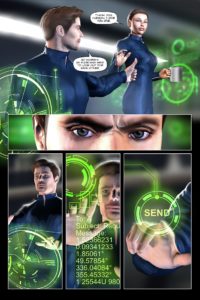 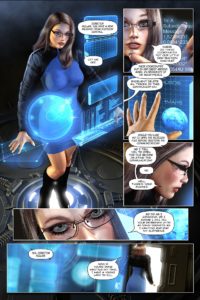