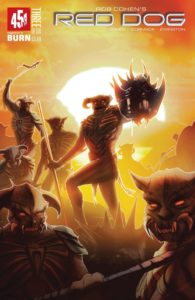 When we left Kyle and his pack of cyber canines, they had just caused enough trouble to be brought up before the Colony Council. This issue opens on the Council meeting to decide the fate of the pack. They decide to let Kyle keep the pack (hey, the book isn’t called RED DOG for nothing, right???), but he has to start giving back by joining the labor force on the colony.

His new job is running a cutter (like a combine or a reaper) out in the fields. Naturally, he brings his pack with him, and naturally they find some down time to play a little. Q has a new “skin” of some kind of red material, so he’s been re-christened “Red”. Kyle is practicing isolating commands so that one command goes to one dog, and so he has Red ( “JUST Red”) catch and fetch a ball. The ball bounces toward the edge of the colony and Red chases it to the airlock. When he doesn’t come back, Kyle goes looking for Red, which means the others have to look for Kyle. In the meantime, Red is caught by the native Kirawanians (who knew they could lasso?), and Kyle has to save his dog.

For this issue we have a change of art team with Alex Cormack taking over for Robert Atkins, and it’s pretty seamless. We get the same dusty, familiar/strange feeling in the pencils, and the same warm and vibrant color scheme. The colorist from issue #2, John Rauch, is doing colors again this issue, and the continuity is good. I’m digging the cool interiors as a break from all the golden and red outdoor scenes. That and Taylor Esposito’s letters bring the volume down to a whisper without being obvious.

Now that our Red Dog is in place, the story can truly begin. I’m still trying to figure out if Kyle’s dad is harsh because he’s a taciturn pragmatist who has lost one son already or if there’s something else going on. I’m also impressed that the whole colony is behind going to find Kyle, given their leader’s stoicism and lack of favoritism towards his own son. The story is amping up, which makes me wonder if they’ll go an obvious direction or surprise me yet again. Remains to be seen in issue #4, due out in May! 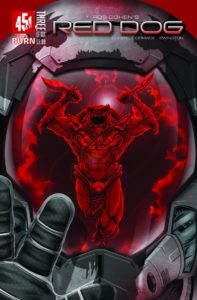 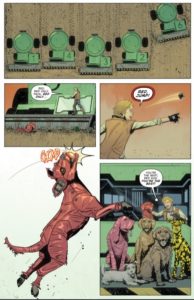 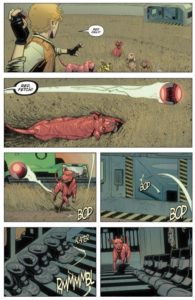 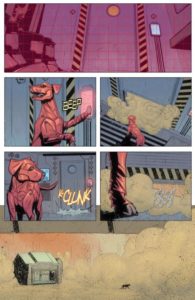