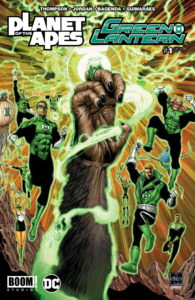 Press release from Boom! and DC

BOOM! Studios and DC Comics are proud to bring together two classic properties in a historic crossover event.
• When Taylor goes missing, Cornelius investigates and discovers an ancient ring, unlike anything the universe has ever seen.
• As its power echoes through the stars, the Guardians of the Universe must reveal to their Lanterns a secret they had hoped would remain buried.
• With the Green Lantern Corps, led by Hal Jordan, racing to get to the source of this power before Sinestro can get his hands on it, they will discover a truth that will change them forever on…THE PLANET OF THE APES.
———-

Dr. Cornelius, an ape of conscience and integrity, is searching for Taylor, the human who changed the way he sees his world. Instead, Cornelius finds something else entirely. Investigating an impact out in the desert, he comes across a crater, and at the center of the crater is what may or may not be the answer to all of Cornelius’s prayers. A seemingly innocuous ring, the artifact still inspires hope that it might help Cornelius put an end to the constant threat of war on his world.

Hal Jordan is thinking back on the good ole’ days, before he and the other Green Lanterns had to worry about the multiple Spectrum Corps. The latest skirmish in an ongoing war, Jordan and other Green Lanterns are fighting a group of Red Lanterns dedicated to war for its own sake. After the last Red is subdued, Jordan receives an alert through his power ring, warning of a “Crosschronal disruption” centered in New York. Despite the Guardians’ insistence that it’s nothing he should concern himself with, Jordan investigates.

Sinestro, the former Green Lantern who now uses fear to power his Yellow power ring, is searching for his own answers. Finally, he knows where he needs to go, and his path is leading him back to Earth. The prize he seeks is something the Guardians of Oa would much prefer remain hidden away, never to be found or used again.

Speaking as a total fanboy who used to stay up late to watch the old Planet of the Apes movies (not the Tim Burton bastardization), and who counted Green Lantern as one of the coolest superheroes ever, this is one crossover that actually got me a little excited. I’ve seen the Green Lantern/Star Trek mini-series, but to be honest that one really didn’t grab me. But this… I mean, come on! Of all the possible bizarre and off the wall pairings of classic titles, who in their right minds would have come up with the idea of tossing a power ring onto the Planet of the Apes? Whatever it was the spawned the idea, here you have it… another pairing of DC Comics and Boom! Studios (check out the JLA/Power Rangers series for another) that takes Hal Jordan and the Lantern Corps into a direction fans never even knew they wanted.

We all know that the crossover event is a publicity stunt designed to draw fans of different titles in new directions. It’s been done over and over, to the point that having one character pop up in another’s book raises an eyebrow at best. That’s a guest appearance, and it happens all the time. When the crossover jumps between publishers, that’s more of an Event.

Thankfully, the creative team is up to the task. The artwork of Barnaby Bagenda captures both the cosmic scale and power of the Lantern factions in their conflict, and the post-apocalyptic look of the Apes and their world. The action is smooth and dynamic, utilizing the various Lanterns as they duke it out with their ring constructs of choice, and the character designs make great use of multiple alien species as well as the unique look of the apes.

One of the pitfalls of the crossover gimmick is often in the mixing of very different characters and settings. What happens is that the story is treated like a “one-off”, sales are assumed to be a given, and there doesn’t seem to be much effort invested in the writing. Thankfully that’s not really looking like an issue in this case. Justin Jordan’s work in this first issue sets up some pretty cool concepts, and it looks like he’s done his homework on both elements of the story. I’m looking forward to seeing more of the interactions between Doctors Cornelius and Zira, and Hal Jordan, as the plot moves past this introductory chapter. What’s especially worked for me so far is just that none of the different elements seem taken for granted. The characters are being thrown into a pretty bizarre situation, even for comics, and they aren’t really taking it all in stride. Jordan in particular looks like he’s going to be the victim of “fish out of water” syndrome as he finds himself in some pretty unfamiliar territory.

So, yes… it’s a gimmick. That’s what a crossover is, bar none, a device to drum up readers from different genres and in this case publishers. Whether or not it all comes together as the story moves past this opening issue is where we’ll see how it’s going to work out overall. I’m keeping my fingers crossed cuz I gotta tell ya, so far it’s looking like this one could be a pretty cool ride. 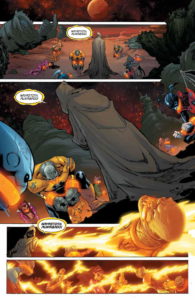 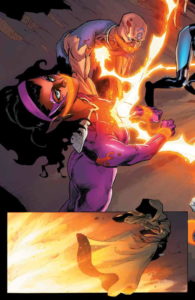 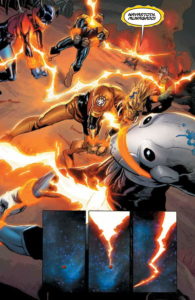 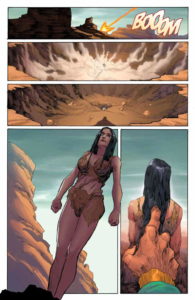 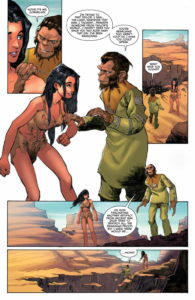 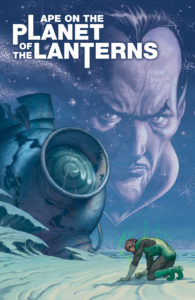 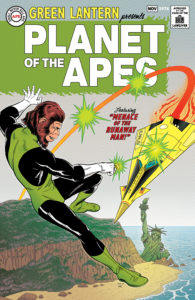 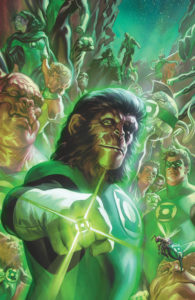 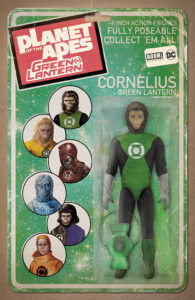 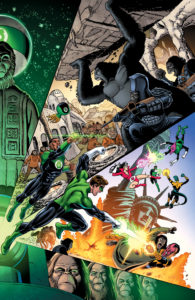