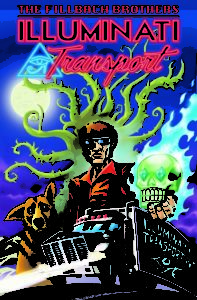 (From the Publisher)
Dear Reader,

1First Comics is proud to present a preview of The Fillbach Brothers’ latest book, ILLUMINATI TRANSPORT.

Those of you already familiar with the brilliant and brilliantly twisted Fillbach Fréres (CADAVER DOGS OF WINTER; CAPTAIN FREEBIRD: AMERICAN PRAYER; TALES OF THE S.S. JUNKY STAR) will already be exuding the cold sweat of comics delirium. Humor and horror collide in this fast paced road-trip to the apocalypse!

We are soliciting a MAY 24 release through Diamond.

Some of you may have already seen or signed on for the exclusive Kickstarter edition. Fully funded — thank you very much! Although the Kickstarter is over, we have extended the campaign through BackerKit Pre-Orders. Yes, you can still get yourself the Kickstarter Edition of Illuminati Transport or any of the other goodies featured on the Kickstarter now until 2/3!

This title will also be available through the 1First webstore and through ComiXology.

Please read and enjoy the Review Copy! If you have any thoughts—anything from a short blurb to a full review—we’d love to see them! Please email directly to me. And if you need additional material, I can handle that too. I’m looking forward to hearing from you.

And on the to review!

Omar the evil genie lays claim to another victim, demanding a helpless woman’s soul as payment due for three wishes granted. For the Department of Paranormal Experts, it’s just another day on the job. Led by the stalwart Branson Missouri, the D.P.E. strike team leaps into action. Branson keeps Omar busy with a combination of fisticuffs and banter, while crack pilot Chip-Chop prepares a binding circle to hold him in place. When the trap is ready to be sprung, the beautiful and deadly Lady Dynamite casts the spell that sucks Omar back into Aladdin’s Bottle, putting the cork in another case of magic gone wrong.

It all sounds very exciting and action packed, the kind of comic book anyone would be thrilled to read. I’d imagine that the ongoing adventures of the D.P.E. team, the elite operatives who bump back when things go bump in the night, would be a best seller… but this book isn’t about them. This book is about what happens after the mischief and mayhem has been put down. It’s about the many professionals who arrive on the scene to clean up the messes once all the bumping is over with.

Enter Jim Kowalski, truck driver for the transportation department of the super-secret Illuminati organization. He’s the guy who gets called up when things like bottled genies, summoned Templar Knights, caged Chupacabras, and escaped zombie agents have been rounded up. With his partners Geech the talking dog and Rico the crystal skull, Jim picks up his cargo and transports it to the Illuminati Warehouse (number thirteen, maybe?) for proper storage and safe keeping.

Just so we’re clear, this isn’t a serious book about the ongoing battle against the forces of darkness. No, sir, this is a totally different book, about a guy and his dog. And his skull. And a demon. Also zombies. Crap, maybe it is that other book, just with a different spin to it. Actually, what this book is, when it’s all said and done, is a blast. Honestly, the whole thing came across like a cheesy “B-movie”, maybe something John Carpenter or Sam Raimi would’ve come up with in their early years, that gains a loyal cult following and winds up with a series of direct-to-video sequels and copycats… probably a comic book or two.

Whatever Illuminati Transport is, this is one of those books that got a chuckle out of me on pretty much every page… and at 128 pages, that’s saying something. Full of nods to the kinds of stories that made it possible, Illuminati Transport definitely gave me the impression that the Fillbach Brothers had a blast while putting this together. “Paul, what kinds of nods,” you ask? Well, there’s the last minute pickup Jim get assigned to outside of Barstow, where the M.I.P. (Men in Plaid) are holding a captured alien from Planet X. Another obvious one is the presence of Merlin, who looks an awful lot like a certain wizard played by the great Christopher Lee. In general, it felt like most of the character designs served to remind the reader of something or someone, from whatever genre movie they love. Even where the writing drags on a bit, I was reminded of some washed up actor delivering his or her lines with heavy-handed “just give me my f**king paycheck” abandon. For all I know the ham fisted writing was deliberate, in which case the Fillbachs absolutely deserve an award. Their work shares more than a little DNA with the likes of Big Trouble in Little China, and for that those of us who hold movies like that in high regard should show some appreciation for their efforts.

In an industry filled to the brim with over-the-top heroes and melodramatic prose, it’s awesome to get my hands on a book that not only doesn’t take itself too seriously, but also doesn’t take any of those other guys seriously. I’d like to offer a huge thanks to Mr. Alex Wald of 1First Comics for the review opportunity on this one. It was a hoot!