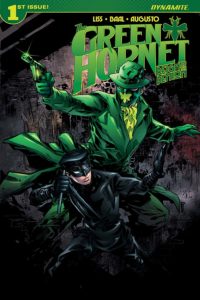 The Green Hornet: Reign of the Demon #1 (of 4)
Dynamite Entertainment
Written by David Liss
Illustrated by Kewber Baal
Colors by Adriano Augusto

If imitation is the sincerest form of flattery for most people, it could be the deadliest for The Green Hornet and Kato. With their vigilantism tearing apart organized crime, Chicago is visited by two more masked individuals: one claiming to be a friend and the other…their most formidable foe yet!
———-

Chicago mob boss Vito Cerelli has been out of the picture for several months, leaving the notorious Green Hornet at the top of the city’s underworld food chain. But then word spreads of a ruthless new figure, feared by all and taking a page from the Hornet’s own playbook, a masked criminal mastermind calling himself Demone. Now the Hornet and Kato must once again work their way up the criminal chain, to uncover the key to tearing down Demone’s organization.

I’ve been a sucker for the Green Hornet and Kato since the first time I saw them on the Batman television show from the sixties (for the record, I wasn’t actually watching them until the mid seventies). Lacking the blatant camp of Batman and trusty sidekick Robin, the Hornet and Kato were edgier versions of the Caped Crusaders. Take in the added element of Bruce Lee’s brand of on-screen action, and it was a guaranteed win for a young comic book enthusiast. Here we are, years later, and I still hold a soft spot for Hornet and Company, more so than the other pulp action heroes of the time (although Doc Savage and the Shadow are holding a pretty close race for second and third).

So it makes me happy whenever I see that Dynamite is putting out another series featuring Chicago’s infamous masked crime boss/vigilante. But how do you keep a character like the Green Hornet fresh and relevant in today’s comic book market? He’s never had the diverse and impressive “rogues gallery” of some of his peers, focusing mainly on normal everyday mobsters. I suppose with that in mind, you start by bringing in someone who operates a little differently, someone who has adopted a masked alter ego instead of a suit and an evil mustache.

Enter Demone. His rise to the top of Chicago’s criminal empire came fast, filling the power vacuum left behind by Boss Cerelli’s downfall. His tactics are both ingenious and brutal as he leaves no doubt that any resistance, any hint of betrayal, is met with an immediate and violent death at his hands. Specifically, at his hands, as Demone doesn’t put his dirty work off onto his underlings. When it’s time to mete out some violent retribution, this criminal boss isn’t afraid to get his hands bloody. Facing an enemy against whom the Hornet’s usual strategies prove ineffective, Kato sets off on his own to try different angles of attack.

Further complicating current events, there’s a new Chief of Police in town and his name is Joseph Cline. By all accounts, he’s made a name for himself as someone who can clean up any department he’s appointed to, and he’s not afraid of a challenge. Chief Cline’s arrival in Chicago is heralded by some very public statements, in which he announces that he’s taking a personal interest in the downfall of the city’s “colorful” criminal element. So we’re clear, this includes the Green Hornet, who’s gone to great lengths to concoct the facade of criminal mastermind as a cover for his crime fighting methods.

The Hornet and his alter ego Britt Reid, will need all of their respective allies dedicated to the cause if he’s going to take down Demone while avoiding the highly motivated and supremely dedicated Chief Cline.

So far, as a new addition to the Green Hornet’s pulp legacy, Reign of the Demon is off to a fine start. There are some points where the dialogue seems rushed, with conversations jumping from “hello” to “we’ll see about that” in the course of just a few panels. That’s understandable, given the amount of ground writer David Liss has to cover to establish his story, and I’m more than willing to own up to my own foibles. Dialogue is tough, especially when you’re trying to set up characters, setting, and conflict within the 24 or so pages of your average comic book. Add to that the challenge of doing it all within a four issue series run, and the fact that the story holds water at all should qualify Liss to be one step closer to Sainthood. All in all, very slight script issues aside, the concept of multiple masked heroes/villains bouncing around Old Chicago is a good one.

Which brings us right around to the work done by Kewber Baal & Adriano Augusto, whose illustrations and colors (respectively) do a fine job of presenting Chicago at the time that radio was just starting to take off. I always have to give some respect when an artistic team can take a historical setting, populated by ordinary people in everyday clothing, devoid of the normal capes and tights, and make it interesting. While this first issue didn’t have a lot of action, what was there- compliments of the always dynamic fan favorite Kato- was smooth and dynamic and had sort of a cinematic style. Baal would focus on a face, show us the character’s reaction to something, and then pull back to show us the cause. It’s a simple thing, used quite often on screen, but it was kinda cool in the setting of the book, and isn’t something that you see all the time.

So with the reminder that I am a fan of all things pulp, and therefore might be a little inclined to treat them a bit more kindly, I give this latest entry in the Hornet’s mythos an optimistic thumbs up. I’m looking forward to seeing the action kicked up a notch or two once it really starts rolling. 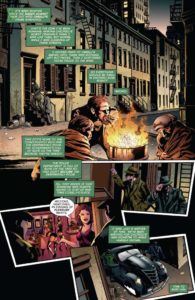 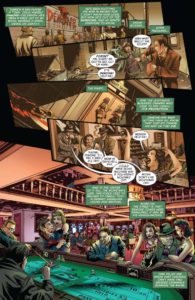 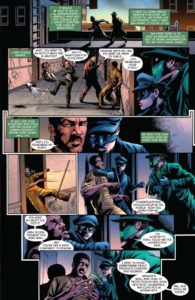 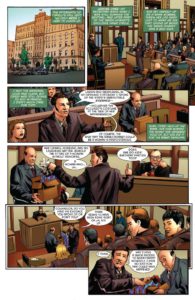 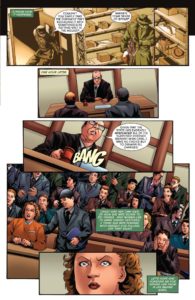 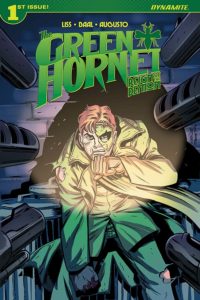