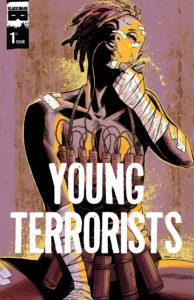 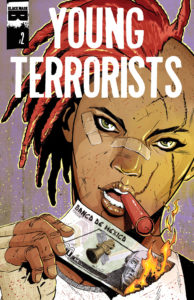 Available: Issue #1 available now; Issue #2 on December 14, 2016
Sometime in the not-so-near-as-much-as-nihilistic future, a young man strikes out to make his mark in the world through activism because he has nothing to lose. A young woman is raised to fight so that she will survive whatever life throws at her. Together with a band of escaped convicts, they are set free as much by their solidarity as a group as they are by their need to violently expose and change the status quo.  The world has gone wrong, and they need to fix it.

Issue one is mostly Sera’s back story – how she became a fighter and started on her journey; and also Cesar’s introduction to the group. Issue two continues Cesar’s story to its somewhat unexpected conclusion. In two super-sized issues, you have the entire first arc. It’s a brutal story, but honestly illustrated by Nahuelpan with much finesse, and colored by Csuka to great effect. You’ve got to love a panel where the vivid color goes to the severed head and not the naked girl.

In this future, the art of conversation exists only for exposition, and exposing too much means that loosely-made plans A and B have to give way to plans D, E and F. There is definitely some of the “let’s be shocking” attitude of early Vertigo or the gritty comics of the 1990’s, but Pizzolo does his best to make it relevant. Most of the nudity and violence does serve the story, with very little gratuity.  I read it, and then went back to read it again.  It’s dense in story, but worth reading.

If “Die Hard” is your favorite Christmas movie, then Young Terrorists might be your best present. Pick up both issues from your local comics shop, or with your favorite online retailer. 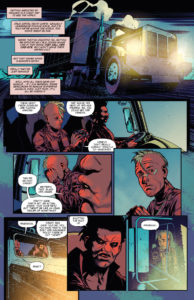 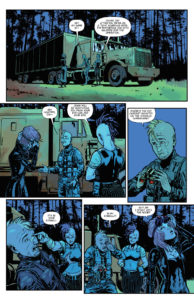