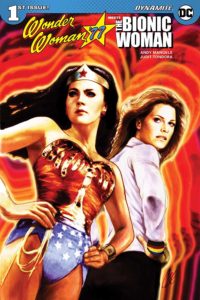 Party like it’s 1977 in this cross-over event fans have wanted for decades – but never thought possible! Now, Diana Prince meets Jaime Sommers… or should we say, Wonder Woman meets The Bionic Woman? In this action-packed mini-series, the two television titans team up to fight a rogue cabal bent on wreaking havoc and stealing deadly weapons. Can CASTRA be stopped before their real targets are revealed and lives are lost? With super powers, bionic enhancements, surprise villains, and an invisible plane, just about anything is possible!

An explosion rocks the surrounding blocks. A building crumbles. Passersby run screaming as the panic sets in. Emergency services are on the way, but in the meantime there are survivors that need rescuing, and everyone on the scene is running away from the danger.

Scratch that… two who happened to be in the area, on the way to a meeting of the minds, are working against the tide. Diana Prince and Jaime Sommers are running toward the danger with no other thought than to save lives. With a spin and a flash, Diana Prince is replaced by the statuesque figure of Wonder Woman, while Jaime Sommers leaps into action with a bionic “deeneeneenee”. While Jaime does her best to clear the building of survivors, Wonder Woman calls for her invisible jet and brings a rooftop water tower into play to control the flames.

With fire trucks and rescue workers arriving on the scene, television’s two iconic ladies of action turn things over and continue on their way. As it happens, they were both on their way to the same place, for a joint meeting between their respective agencies. Wonder Woman, who as Diana Prince works as an agent for Intra Agency Defense Command, and Jaime Sommers in her role as an operative of the Office of Scientific Intelligence, meet again for their latest operation’s briefing.

The OSI and IADC are uniting their efforts to stop a paramilitary organization, called “CASTRA”, who has been targeting scientists involved in high tech defense research and development. The apparent ringleader behind the attacks is Ivan Karp, a man with as sinister sounding a name as I can think of. With the stakes high, the two organizations are assigning their top people the task of striking back at CASTRA. Meanwhile, Diana and Jaime are given the job of protecting the next likely target of the sinister cabal, Dr. Niyol Tahy. Little does anyone know, there are ties linking CASTRA to both agencies, and as the plot thickens the true leadership of the evil organization will be revealed…

As a kid, I was all about anything sci fi, and all things superhero, so it shouldn’t come as a shock to learn that I was glued to the television anytime Wonder Woman or the Bionic Woman were on. For that matter, there’s an added connection that gives this particular comic a boost in my eyes… Lynda Carter and Lindsay Wagner were two of my first TV star crushes. If they could somehow work in the original Charlie’s Angels or Nancy Drew, I’d just hand over all my money and be done.

Don’t get me wrong, this book has a lot more going for it than recollections of my pre-teen fascinations… The creative team of Andy Mangels & Judit Tondora has pretty well nailed all of the required points for any comic involving characters from classic television shows. First of all, Mangels did some homework. He’s scripted these characters to reflect their onscreen personalities pretty well, at least so far as I remember them. In particular, I’m impressed with the wry wit that I recall being one of the hallmarks of Lindsay Wagner’s performance. It shows the best in her amused disbelief that Steve Trevor could be so dense as to not realize that co-worker Diana is in fact his long-time acquaintance Wonder Woman. For that matter, in an exchange between Jaime and Diana, Diana stammers out a “whatever do you mean?” when Jaime expresses her disbelief, to which Jaime replies something to the effect of, “hey, don’t fix it if it ain’t broke”. Tondora’s artwork is the icing on the retro cake, reflecting the styles and attitudes of the times, right down to the polyester bell-bottoms and feathered hairstyles.

I gotta tell ya, I’m enjoying the hell out of the current trend among comics that are revitalizing some of the classic movies and shows that I grew up with. In this one, Dynamite and DC have joined forces to take it one step farther. They’ve concocted a crossover bringing together two ladies who were breaking the chains of misogynistic stereotypes on seventies prime time television before Buffy was even a glimmer in Joss Whedon’s eye. I’m looking forward to seeing where the series goes from here… By the end of the first issue, we’re given no real clues as to CASTRA’s motivations or endgame, but we do get a peek into some of the layers the story’s being built on. For crying out loud, we’re even given a shadowy hooded figure lurking around the final pages, who had me wracking my brains for any possible bad guys I can recall from either of the original shows.

For a trip through the Way-Back Machine, DC Comics and Dynamite Entertainment have been doing some great things, and I’d love to see that trend continue (possibly involving aforementioned Charlie’s Angels?) with more crossovers like this one. That only happens when they sell copies, so get out there and lay down some dough, man. Dig it? 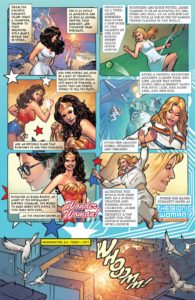 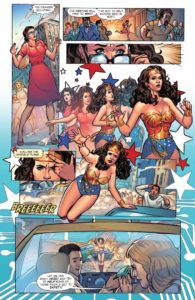 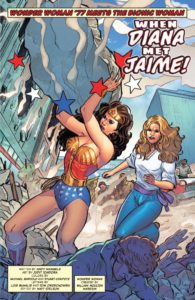 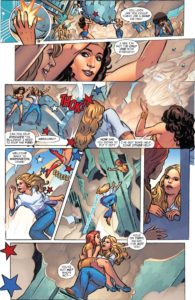 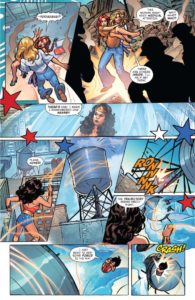 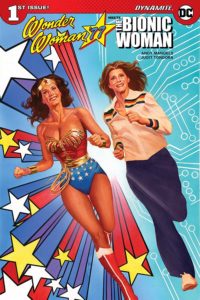