Titan and Games Workshop explore a new battlefield – based on the smash-hit video game!

Prepare for a new dawn! In celebration of the upcoming and highly anticipated Dawn of War III real-time strategy game, Titan Comics and Games Workshop join forces to deliver a brand-new four issue comic mini-series in April 2017. Titan’s brand-new Dawn of War III comic mini-series comes hot on the heels of the phenomenal Warhammer 40,000: Will of Iron ongoing series, which launched earlier this year.

Written by Ryan O’Sullivan (Eisenhorn: Xenos, Turncoat) and illustrated by Daniel Indro (Vikings: Uprising, Doctor Who), the Dawn of War III mini-series will tie-in to the colossal Dawn of War real-time-strategy games, produced by Relic Entertainment with Sega and Games Workshop, in which players command armies of the Space Marines, Orks, and the Eldar to dominate the battlefield!

“I’ve been a fan of Warhammer 40,000 and all of its games for as long as I can remember,” said writer Ryan O’Sullivan. “What I enjoy about the Dawn of War series in particular, other than the ability to purge heretics, is that the games have a decade-long narrative filled with ongoing characters and conflicts. I feel very fortunate to be able to contribute towards such a story, and I hope fans of the previous games will enjoy seeing familiar faces back in action on the pages of the comic.”

Titan’s Dawn of War III comic series tells an all-new tale in parallel to that of the video game story, which sees three factions – the Blood Ravens Space Marines, the Eldar, and a fearsome Ork horde – converging on a planet where a weapon of devastating power has been unearthed.

Titan’s Warhammer 40,000: Dawn of War III mini-series will be available for pre-order in February’s Diamond PREVIEWS catalog. To keep up with the latest news and developments, join Titan Comics on Facebook, Twitter or Tumblr 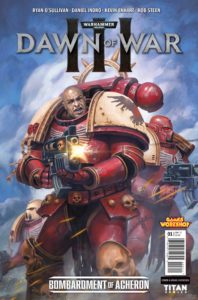