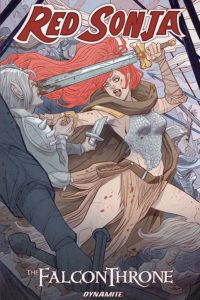 Across the plains of Hyrkania, a message sweeps through the scattered peoples of the nation. Bells ring, horns blow, voices shout — the King is dying! Red Sonja rides to save the King from his doom as the powers of Hyboria crowd around to strike when the kingdom is weakest. But a dread new power rises from within Hyrkania’s own borders, bent on defending its homeland… no matter the cost, no matter what its people become. A defining chapter of the Red Sonja saga, dark, clever, vicious, and funny, as the She-Devil with a Sword must stop the rise of a brutal new regime: her own people!
* “With Bennett’s lively, layered script and Aneke and Jorge Sutil’s light, colorful artwork, Sonja is in very good hands.” – Comic Book Resources
* “Putting women, and these ones in particular, in control of Red Sonja is the best thing that’s happened to the character…” – Comicosity
* “At once reassuringly familiar and refreshingly free of baggage, the She-Devil has a lot of life in her yet.” – Girls Like Comics
* “Wonderful artwork and vibrant colors, a well fleshed-out world of Hyrkania, and an excellent new take on Red Sonja.” – Latino Review
———-

The Hyborian Age is coming to a close. In the kingdom of Hyrkania, a land of disparate and individual tribes, violence has always been the way of things. Despite the old Hyrkanian King’s best efforts, it has remained a kingdom divided, and all the while its enemies hover at the borders waiting for a show of weakness, a shift in power.

The old king is dying, and with his death all of Hyrkania feels the rumblings…

On his death bed, an old man asks Red Sonja, Sonja the She Devil, to take his place on the throne. She’s lived her life as a symbol of freedom, refusing to be defined or restrained by anyone, but for all of that she’s remained loyal to those she has chosen as an ally. Sonja also happens to be surprisingly self-aware, and knows that she’d be a terrible queen, following her whims like she always has, only with the weight of a crown to both empower her and hold her in place.

Turning away from the throne, Sonja leaves Hyrkania behind. In her travels, she’s heard nothing from her homeland and after a year she goes back to discover that the old king’s second choice may have worked out for the best. Hyrkania’s borders are secure, and open trade with other nations has brought prosperity for everyone. People travel the open roads in safety and security, knowing that the king’s army will keep everyone safe.

At first glance, everything seems to be great… but that always seems to be when things are the worst. The newly crowned king of Hyrkania has made great gains, but in exchange for their security the Hyrkanian people have given up much of the freedoms in which they’d prided themselves. They were united as a people, but surrendered their individuality as payment. Now, Sonja has to find a balance, both for Hyrkania and within herself. As the She-Devil with a Sword she had no equal, but when faced with a battle that needs to be fought in the hearts and minds of the people, as well as with the king’s fanatical Black Talons, Sonja will have to broaden her horizons.

This edition collects all six issues of the Falcon Throne story arc, perfectly scripted by Marguerite Bennett. She’s captured the personality of a character who’s spent too much time as a well-endowed stereotype, building on the depth that’s given Sonja new popularity. Sure, she’s still quick to draw steel and swing for the fences, but she really shines in the moments between the violence. Bennett won some chuckles from me early on in the story when Sonja realizes how boring things are when there’s no one around to slay, and more than a little respect when she gives Sonja the chance to grow enough to realize that some battles have to be left behind before they can be won.

Aneke & Diego Galindo do more than their share of the work, bringing Sonja and the people of Hyrkania to life on the page. The action scenes flow very well, and Sonja can still throw down with the best of them, leaping into fights with all of the ferocity fans would expect. When there’s no violence to be found, the characters are allowed to be more than place holders on the page, with more emotion being shown in facial expressions than can be written through dialogue.

Fans of classic sword & sorcery fantasy have probably already read plenty of Red Sonja’s stories. Some have undoubtedly been better than others, so there might be a feeling of dread whenever the red-headed mistress of the sword changes creative hands. Folks, rest assured when I say that Sonja’s in good hands, with not a single chainmail bikini to be found.

Okay… that’s not exactly true. Point of fact, there are exactly three. Now go buy the book and find them. 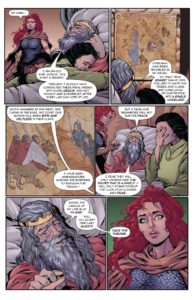 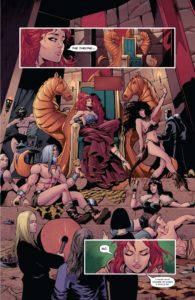 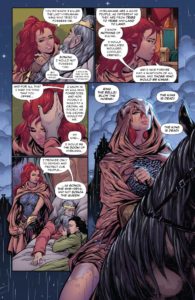 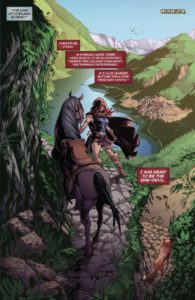 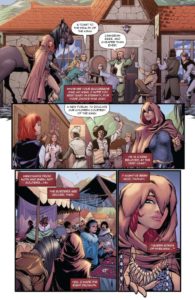 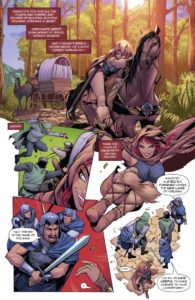 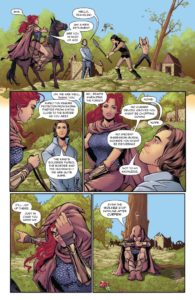