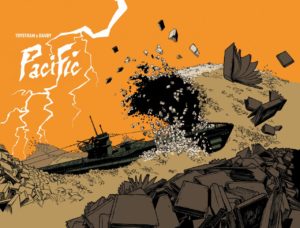 The tail end of the Second World War, in the middle of the Pacific Ocean… Udo, a young radio operator, is delivered to his first posting aboard a U-boat. Among his meager possessions is a book he has never seen before… one forbidden by the Nazi party. This book would change the lives of all on board… whether they wanted it to or not.
———-

When radio specialist Udo Grothendieck arrives at his post aboard a German submarine in the middle of the Pacific Ocean, he is as fresh as the day is long. His shipmates, all veterans of the German submarine service, are hard men who don’t all welcome him with open arms. He’s the “new guy”, and as such Udo is subjected to treatment befitting his place in the harsh pecking order among the enlisted men.

Udo’s status on the bottom rung of the ladder is cemented when a book is found among his personal belongings. The young sailor denies ever seeing the book before, and claims no knowledge of how it could have gotten into his property. The book, banned by the Nazi party for its seditious ideas, might seem like a very small thing, but if found by one of the ship’s officers the consequences could be felt by everyone. The obvious solution is to get rid of the book as quickly as possible, and to that end the offensive material is flushed out into the Pacific, to float among the fishes and never corrupt the minds of men…

Pacific is a tough book to categorize. Taken literally, it makes no sense at all. Sure, its setting aboard a German submarine during World War II is pretty standard, and it functions on that level just fine… until it doesn’t. Then there are definite supernatural elements to it, but on that level alone it doesn’t quite work either. There’s just too much ambiguity to make it easily identifiable. So of course, glutton for punishment that I am, I decided to pick it out for a review.

Breaking the story down, it has all of the elements to make it a classic read. You’ve got Udo, the established POV character. He’s placed into an unfamiliar environment in a time of war, among men who’ve served together long enough that they’re reluctant to open up to a new, untested member. There’s your initial conflict. Next, the Captain of the U-boat is a figure of mystery, so damaged by past events that he’s separated himself from his men to avoid forming any sort of bond with them. He’s seldom seen outside of his cabin, but at night his dreams are filled with the horrors of past battles and lost friends, and his cries are heard throughout the ship. At first glance, the Captain looks to be the quintessential elitist, a true-believer of the Nazi ideal, and therefore presents as the ideal antagonist.

But then there’s that damned book.

We’re never told what book it is, only that it instils dread among the men, its mere presence threatening to unravel the threads that hold the very Fatherland together. And it’s the book that turns Pacific into something much more than just another war story. The book represents a thought, and once that thought is expressed and shared, it takes on a life of its own. It’s an ear-worm that digs its way into the sub-conscious, an entirely new thing that mingles with established ideals to create something new.

It’s no secret that the Nazi party went to great lengths to crush any expression of ideology that didn’t mesh with their own. They embraced book burning as a virtuous strike against that which could undermine the strength of their views. That kind of determination and self-righteous fervor is only ever inspired by one thing: fear. The Nazis didn’t want people to think, to question, to determine for themselves what the world should be. They claimed to want a “master race”, when in fact the Nazi leadership was doing everything it could to ensure they had a compliant race of sheeple who would do and think what they were told.

And then, aboard a submarine in the middle of the Pacific Ocean, crewed by as die-hard a group of patriots as you’d be likely to find anywhere… there’s that damned book. Once I got my literal right-brain to settle down and stop trying to fit everything into a tidy square space, I saw this story for what it is… it’s a parable. Plain and simple, it’s a morality play on the power of thought and expression, put to paper with style and flair by Martin Trystram & Romain Baudy.

If you’re just looking for some stylized action and violence, Pacific probably isn’t going to be for you. Sure, you might be able to ignore everything but the setting itself, and enjoy it solely on its merits as a bizarre story from World War II… but I think you’d be missing out on quite a bit, and honestly there are other books out there with more action to satisfy that itch.

If, on the other hand, you’re looking for something that dares to be different, a story told from a decidedly different point of view, this might be the thing. Just be careful… once it works its way into your head, you might not be able to get it out. 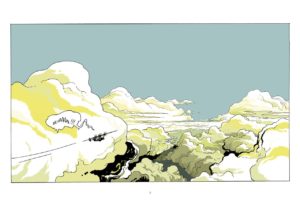 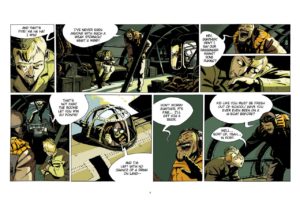 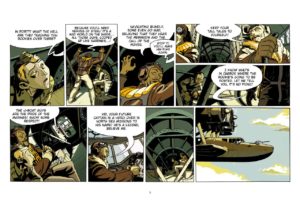