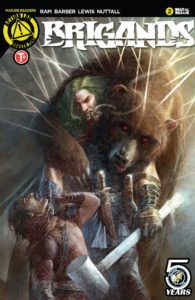 Pulled from death row and recruited by the secretive inquisition to steal an artifact called The Myros Pendulum, Stilian Desault now paired with an old colleague, Veina must put together a group of Brigands for the heist of their lives. But there are no happy endings or quick deaths for battle-forged blades. Stilian will soon discover that things are about to go very wrong.
Overall, the idea of performing a job for the second most powerful man in Temur would seem to be a better prospect than beheading. Then again, that powerful man could be the Machiavellian schemer Arom Rotche, a man who believes that you really can’t believe a person’s word until you’ve pulled out six of their teeth. And if the item is the rumored Myros Pendulum, theoretically able to predict the coming of the comet that has heralded tumultuous events throughout history, the risk/reward equation gets even more skewed. All of that weighed against imminent beheading, and Stilian Desault still had to think about it.

Desault, also known as Stilian Blackheart, veteran of the Nor’an Wars, has taken the deal offered to him, and has set out to gather a crew in the spirit of the Dirty Dozen (that’s a cowboy movie, kids). To do a job that could spark off a war, you don’t need “good guys”, you need people who will do whatever foul deed it takes to accomplish the goal. The first member, fellow death row inmate Veina, was easy. Next, Desault will have to journey to Barren Halls Prison to find the third member of his party.

Unfortunately, Desault’s timing sucks. He has no idea that Barren Halls is now under the control of the inmates, and Mogh Davoran, the new self-proclaimed warden, isn’t going to be happy to see a couple of strangers at his front gate. You see, taking over a prison really isn’t the hard part, because the inmates almost always vastly outnumber the guards. With that in mind, Davoran has come up with the perfect plan: Keep everyone inside the prison and continue to collect the incoming shipments of gold, intended as pay for the now dead guards, and supplies. Then, when enough has been accumulated, he intends to lead the inmates out into the kingdom on a campaign of chaos and anarchy. So it is that when Desault and Veina arrive at the prison claiming to be Kingsmen on an important mission, Davoran has to improvise.

The writing style in Brigands does a great job of presenting a medieval setting without getting mired down in thee’s and thou’s. The tone is one of high adventure, with a healthy dose of fun in the mix. Sure, there’s the whole life and death thing, heavy on the horrible where the latter is concerned, but it’s all essentially an old-fashioned swashbuckling romp. Again, I’m going to refer to movies like the Dirty Dozen and Magnificent Seven, because as Desault goes about bringing his crew together Brigands really invoked that tone for me. It’s done in a great example of the road being more important than the destination, because here we are at the second issue of the series, and we still don’t have all of the main characters together.

Brigands is a great piece of work, that has multiple things going for it at once. If you’re into the fantasy genre, here you are. If you like medieval action, check. You like the idea of protagonists that are most definitely not boy scouts, say no more. All you have to do is pull the metaphorical trigger, and enjoy the action. 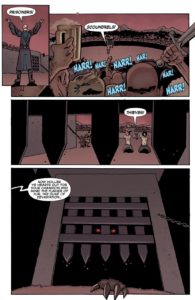 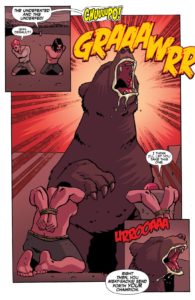 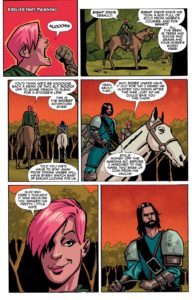