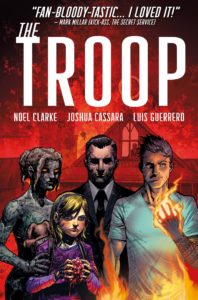 From broken homes, shattered lives and empty, drug-fuelled existences comes a band of youngsters with extreme powers. Misguided and desperate, they find themselves hotly pursued by black-suited killers who want them dead – that is until they are brought together by a seemingly benevolent billionaire. But just what is his agenda and what will it take to make a pack of reckless teenagers into the awesome team of superheroes called The Troop?! Collects The Troop #1-5
————

Once upon a time, the passengers on a plane were the unwitting subjects of an experiment. All dosed with alien stem cells, they remained unaware of their lab rat status and continued on with their lives. Everything was normal, until their children started exhibiting powers and abilities. After that, it was only a matter of time until the minds behind the experiment came looking for their subjects.

The mysterious Mr. Edwards is a man of means. The “third richest man in the world” has dedicated his resources to gathering together the children of those unwitting test subjects, for reasons still to be made clear. Standing in his way are an organization called Illusion, also determined to gather their subjects for more mysterious reasons, and their methods are much more ruthless. A third party is in the middle of the conflict, the fanatically religious organization called the Balance Order. They believe that the children are spawns of Hell, and their mission is to cleanse the world of their demonic presence.

The Troop has a lot going on, and much of the time it’s all going on at once. There are jumps in the narrative that take some getting used to, and character arcs happen fast so you need to be paying attention. Despite some hitches in the story, however, writer Noel Clarke (if you’re a regular comic book reader, you’ll likely recognize him… look him up on IMDB) presents a different spin on the super-powered team book.

First of all, the Troop’s benefactor, Mr. Edwards, has issues. His stated purpose is to collect all of the super-powered kids that he can, to protect them and keep them safe from Illusion, but his methods are a little heavy on the ends justifying the means scale. Think Professor Xavier, but with a moral compass that doesn’t quite point to true north… more east to north east, maybe.

As for the kids themselves, most of them are a mess. Between illicit drug use, self-abuse, and a plethora of inappropriate sexual relations, their base of operations has more in common with a halfway house for juvenile delinquents. The variety of powers they display is pretty much standard, but the way they’re put to use is kept impressively diverse, and in many cases goes against the expected comic book tropes. It isn’t a big burly Russian guy who turns to stone and tosses cars around. That would be Stephanie, the cute blonde Australian who’s taken on the role of den mother for the Troop, and is also sleeping with Mr. Edwards. That’s right, you never saw Prof. X nailing Jean Gray, so take your expectations and toss ‘em right now.

The rest of the Troop carries some cool abilities. The youngest, Janette (codename: Virus) can infect anyone she touches with any disease she knows about, and can use “WebMD” effectively as a weapon. Ray (codename: Wish) is a no holds barred fighter for cash, and can turn himself and other objects into any substance or element. Torrence (codename: Torrent) has the power of water control and can turn herself into a watery form (at one point she infiltrates a hideout by letting a badguy drink her, and then when he went back to his lair she waited for him to pee!).

While not without issues, The Troop is an entertaining and off the wall spin on the team hero book. If you’re looking for a more adult oriented, darker take on everyone’s favorite mutant superheroes, the team of Noel Clarke and Joshua Cassara have put together a chaotic piece of work for this collected edition’s story arc. 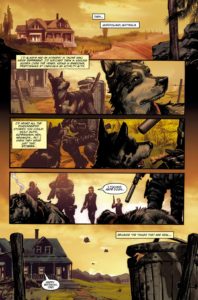 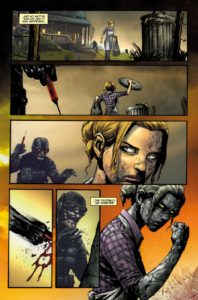