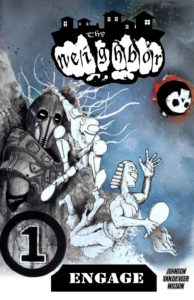 “The American Dream has become a dystopian nightmare. Criminal organizations have seized control and actively undermine the established democracy. Corruption has bred a new form of capitalism, putting power in the hands of gang leaders over lawmakers. Opportunity comes only to those who can turn a profit, putting law enforcement and emergency services under the thumb of the highest bidder. Money is the new oxygen. The deeper your pockets, the longer you live.

“Adapted to the New World Order, a group of American ex-military operatives come together to form the Neighbors, an elite team-for-hire specialized in siege operations, looking to serve up backyard justice in lawless Suburbia.”
———-

This unapologetically violent comic shares some of its DNA with movies like The Purge and The Expendables. At first glance, you might be tempted to just write it off as senseless and over the top, but then I’d have to ask if you’ve ever seen The Purge or The Expendables… or any of the dozens of other movies and TV out there that push the envelope just for the sake of envelope pushing. It’s okay, because at first I was kinda wondering what purpose the Neighbors might be serving, aside from the violent eye-candy. Soon enough, though, I picked up on a few things.

First, the main character in the opening issue is NOT a “good guy”. As he states in his ongoing inner dialogue, he’s doing a job “that gets us paid while dishing out a little hurt.” In the current story, he’s at least getting paid for doing something relatively decent. It seems that the Neighbors’ latest client ran into some financial trouble, and turned to a local personality calling himself The Wig. When said client was unable to pay Mr. Wig back in a timely manner, his daughter Candace was taken in lieu of payment. The Neighbors have been tasked with getting Candace back unharmed.

With those essential facts established, the book takes off at a sprint and keeps going until the end of its inaugural issue. If that’s all you’re looking for in a book, you should do just fine here. If you might be looking for something a little deeper, I have a few things to consider…

The premise of the story is rooted in the ideology of our as-yet unnamed protagonist, and through the work of writer Jordan Wilson, it’s presented pretty well. Our (anti)hero is former military, most likely a Special Forces operator judging by his levels of badassery. For one reason or another, he’s left military service and has found himself a little lost. The military gifted him with a “very specific skillset”, one for which he probably showed a certain amount of aptitude, and life as a civilian has him left cold without an outlet. Along comes a financial apocalypse. The criminal element, the only demographic that still has money to spend, winds up taking charge. In a case of sheep vs wolves, the average citizen is left with very few options.

Time to get a sheepdog.

More to the point, time to pay the sheepdog. While they may perform a community service, the Neighbors do not work for free. That very cynical fact, however, is mitigated by the efficiency and enthusiasm with which this book’s main character approaches his work. He’s determined, brutal, and holds nothing back to get his job done. The fact that he truly loves his work shouldn’t be something we as readers hold against him. He’s a man of a certain mindset, in need of an outlet for the violent militaristic behaviors that we the people gave him to use in our defense.

Thy Neighbor is fast-moving, with Jordan Wilson establishing its world quickly as the story unfolds. The action is dynamic, Camron Johnson’s style giving us quite a bit to take in as we move across the page. Track this one down if you’d like to support a solid independent work, if you’re a fan of balls out action, or if you like to peel back the layers of a story and its characters to get to the juicy pulp underneath. 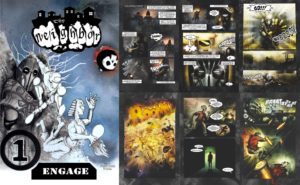 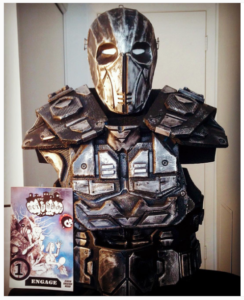 Dude, he even built the armor!