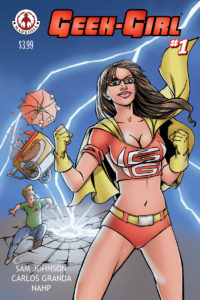 (Honest, my review is down there a ways, but first some words from the publisher…)

Created and written by Sam Johnson (The Almighties, Cabra Cini: Voodoo Junkie Hitwoman) and illustrated by Carlos Granda (Grimm Fairy Tales, Charmed), in the 4-issue Geek-Girl Mini-Series we meet attractive, popular Maine college coed Ruby Kaye – a girl who is used to getting anything she wants. But when she overhears the resident college brainiac talking about super-tech glasses he’s invented and decides she wants them – her whole world gets turned upside down.

When we’re introduced to Ruby, she’s a girl flying around in a super-hero costume, looking for crime, chatting to her BFF Summer on her cellphone, questioning if she’s ‘doing it right;’ because she’s been at this a couple nights now and nothing’s happening. And then something does happen. Right in front of Ruby, Neon Girl – Maine’s resident big-shot Super-Heroine – is blasted through a billboard by a mysterious new villain.

“Ass-kicker Neon Girl is taken off the map – and requiring a life-saving operation – by this extremely powerful, enigmatic woman, Lightning Storm, who seems to have come from nowhere,” says Johnson; “and Neon Girl wants to know what Ruby’s going to do about it.”

“A scared Ruby reveals how she got the glasses on a whim, how it was her friend Summer who made her a costume and came up with a superhero name for her – and how she doesn’t really know what she’s doing,” Johnson continues. “But this isn’t a point of view the no-nonsense Neon Girl has any time for; her attitude is that ‘Geek-Girl’ has super powers and sure dresses like a superheroine, so she needs to step up and stop Lightning Storm!” says Johnson.

And while Ms. Kaye’s trying to get her head around this, things have taken a hit in her social life; thanks to a glitch in the glasses’ programming that’s messed with her head and made her super-kultzy, the only evidence she’s provided her ‘cooler-than-thou’ clique of her powers has involved knocking drinks over them – alienating her from all but Summer. Johnson concludes, “So with a social life in tatters and a new status she doesn’t really understand, Ruby has to try and take on an extremely dangerous force who’s just hospitalised someone who’s like a hundred times better at super-heroing than she is. Let’s see how that goes…”

Geek-Girl #1 is out now from Markosia in Regular, Digital and Variant editions, and available at www.geekgirlcomics.com and www.comixology.com

“Amazingly good debut issue with a new character that totally fits into today’s younger generation of doing before thinking.” Steven Leitman, Reading With a Flight Ring.

“A brilliant premise, an interesting character, and intriguing prospects for the future.”
-Chris Orr, Dress Like The Hulk.

“A charming debut, the dialogue displays a witty back and forth that would make Kevin Smith proud.” -Kris Bather, Broken Frontier.

In Acorn Ridge, Maine, the people can breathe a little easier knowing that there’s a new superhero patrolling the skies above. She’s new to the game and having gained great power, Ruby, aka “Geek Girl”, is now trying to come to grips with the concept of great responsibility. She’s going to have to get her feet under her quickly, as the presence of a powerful new villain forces her to step forward for truth and justice.

Okay, actually the whole superhero gig was kind of a fluke. See, Ruby was drinking with some friends one night, and someone claimed to have a pair of glasses that gave whoever wore them super powers. At first he was reluctant to share the mighty spectacles, but after being coerced into a game of strip poker with Ruby and a friend, he lost them fair and square. While she hasn’t quite gotten the hang of her newfound abilities, Ruby seems determined to take her role as Geek Girl totally seriously… which should be pretty obvious, cuz she took the superhero name “Geek Girl”.

Come on, you got that, right?

Geek Girl takes on the superhero genre from a very tongue-in-cheek angle. There really isn’t much in here that’s taken too seriously, and it works out great. Sam Johnson has a pretty good handle on the dialogue, and produces some solid laughs at some surprising moments. The action beats are handled well by Carlos Granda’s style, and the character designs fit well with the source material… it’s sort of a throwback look, with Geek Girl hitting the skies in a crop top t-shirt, hot pants, and a cape. The result is a book that embraces its kinda goofy tone, no apologies, no regrets.

As things move along, it’ll be interesting to see what kind of character arc Ruby follows, whether she’ll grow into the role of the hero or stay stuck in caricature mode. In all fairness, Ruby isn’t the only typecast character. There’s a meathead jock superhero named Pitbull who spends as much time buying rounds of “brewskis” to hold an audience while he recounts past triumphs. There’s Ruby’s former group of friends holding down the “mean girls” trope with one manicured hand tied behind their stylishly clothes backs.

Some chuckles, some interesting spins on the superhero genre, and good potential to grow into something cool, Geek Girl holds some possibilities in her super strong hands. 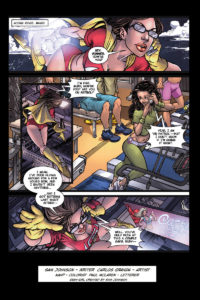 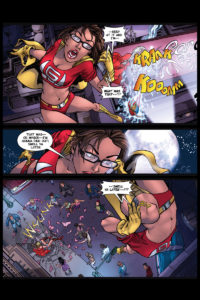 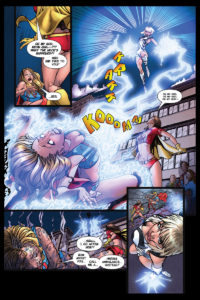 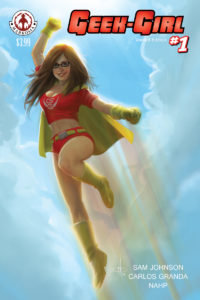