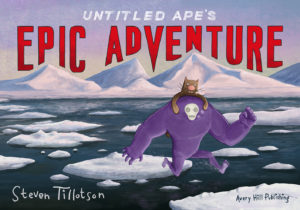 On this particular morning in this particular place, Untitled Ape (a giant purple ghost-beast) has decided he needs to see his family. His friend Cat (a cat) doesn’t think it’s a particularly good idea, but at this very moment a massive storm rolls in, and their epic adventure begins.

Without a map or much of a plan, they journey through flooded cities and stormy seas, across frozen plains and snowy mountains, and even up into the world of the clouds on their quest to find Ape’s home in the jungle. Along the way they make the acquaintance of a cast of incredible characters, who both help and hinder them to equal degree.

Meanwhile and elsewhere, Ape’s past is starting to catch up with him, and it becomes more and more difficult to keep his dark past from Cat…

What happened to Ape? Why doesn’t he have a name? And can he resist the pressure to return to his old life and make sure his friends and family are safe? These are the questions that Jonathan Cape/Observer Graphic Short Story Prize Runner-Up Steven Tillotson wrestles with and ultimately answers in his long-awaited saga of trial, tribulation, and friendship.
———-

Once upon a time, in a far away land, two great creators got together and concocted the grandest, the most epic of all epic adventures (sorry, Bill and Ted). Tim Burton and Terry Gilliam put their heads together, and as fast as you can shake your… wait, you’re shaking your head. Whups, my bad! The story of the Untitled Ape has nothing at all to do with Burton or Gilliam (or Pratchett, or Adams for that matter). This most epic adventure is the creative brain child of Steven Tillotson, of Banal Pig fame!

And just who is the Untitled Ape? He’s a large purple fellow of infinite patience and forbearance, whose single overriding goal is to make his way back home to see his family. With him is his good friend, more or less, Cat. Together they trek near and far… mostly far… crossing oceans and frozen wastelands in their quest to find Ape’s family in the Jungle. Along the way, they’ll meet some unique and special people, solve a mystery or two, and learn the true meaning of Christmas.

Okay, I was totally full of it on that Christmas thing…

What will you find within the pages of Untitled Ape’s Epic Adventure? A whole lotta whimsy, that’s what. More whimsy than you can shake a stick at, and a dose of quirk for good measure. This oddball tale, very much reminiscent of such left of center minds as Burton and Gilliam, covers the gamut of heartwarming fable to cautionary tale, and then around the corner to nonsensical fairy tale. I don’t know that I’d say it’s a great story for kids, as it has its share of dark themes, but it is a fun read for adults who remember what it was like to be kids.

I honestly don’t know what else I can say about it… It’s just that damn bizarre. Fans of fully oddball writing, anyone who ever wondered what kind of story Doctor Seuss might have written after dropping acid, take heed. And if you happen to run across a talking bird, don’t worry. He’s here to help. 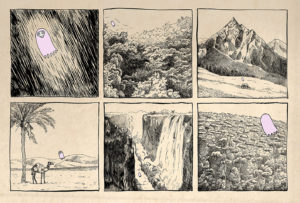 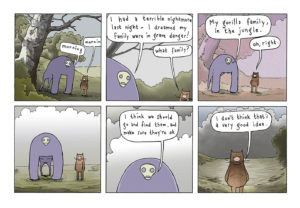 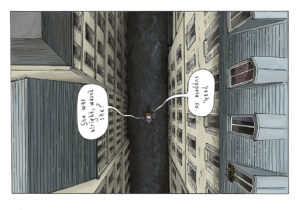 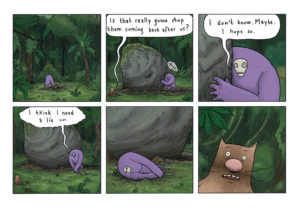 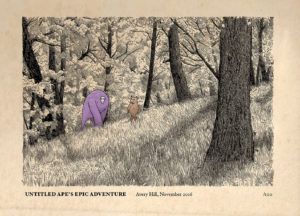