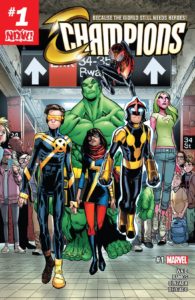 Following the fallout of CIVIL WAR II, Avengers Ms. Marvel, Nova and Spider-Man strike out on their own — joined by Cyclops, Viv Vision and the Totally Awesome Hulk! Six young heroes determined to change the world — and they’re only the beginning!
———-

Reading the first issue of this new Marvel series, that’s the theme that I take away. Disillusioned by the smash & bash tactics of the grownups, Ms. Marvel walks away from the Avengers. She’s tired of laying waste to the landscape for the sake of taking down bad guys, and leaving the cleanup for the little people. As heroes, Ms. Marvel believes with all her heart that should be able to do better than that.

With that deep seated belief firmly in mind, she reaches out to her friends, Nova and Spiderman, who left the adults behind after the chaos of the latest Civil War. To quote the youngest member of the Nova Corps, “I’m done being ordered to punch people I like”. From there, the gathering of young minds grows. Next on the as-yet unofficial roster is Amadeus Cho, the Totally Terrific Hulk. Finally, seeing a need for someone tied into the information superhighway they reach out to Viv Vision. Their first target as a unified force against the chaos is a human trafficking clown calling himself Pagliacci. He’s got a cargo container full of teenage girls ready to ship off to his next customer, but he’s not aware that he’s got another group of teens to worry about, and these kids are pissed off.

What’s great about this series is that Marvel is keeping up with the times. The latest version of the Champions is all about young people, heroes, determined to do better than their elders. As is very eloquently stated by Ms. Marvel, compliments of Mark Waid, “People with power punching down. Taking lives when they don’t have to… We can be better than that. We have to start enforcing justice without unjust force.”

So yes, there’s a great message to be found within these pages, but it isn’t delivered with heavy handed righteousness. As is appropriate when handling characters like Spidey and the new Hulk, there’s a plethora of humor, delivered with Waid’s slick writing and punctuated by Ramos’s dynamic artistic style. While delivering a noble moral, Champions is extremely readable, probably one of the best books from Marvel that I’ve read in a while.

And it’ll be interesting to see if Marvel plans on letting the grown up heroes learn the lessons being laid out by their youthful former protégés. 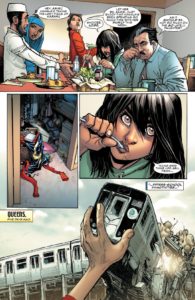 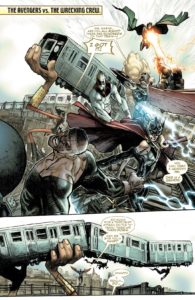 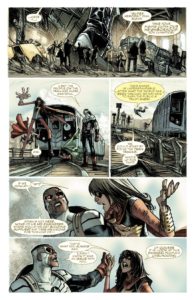