Athena Voltaire and the Volcano Goddess #1 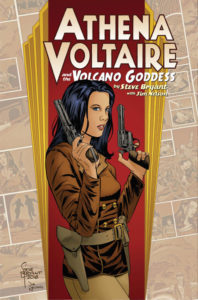 Fun story: I was at MSP Comic Con in St. Paul this last May, and stopped by the table of my friend Mark Stegbauer because his new book Ghoul Scouts was out and he had a variant cover for the Con. Sitting next to Mark was the writer for his book, Steve Bryant. Since Mark was working on a commission, I chatted with Steve a while. Ok, a long while. (I really can chat, despite the introversion.) He’s a really charming guy, so by the end of the Con I went home with the kind of hefty Athena Voltaire Compendium. I read one story, thought “this is really good,” and then left the marker in it for a few months. Last month (still a busy month for me), Steve posts on Twitter that he has sneak peaks available for a new Athena Voltaire story, so on one of my weekend trips I toss the Compendium in with me and keep reading…and reading. It’s lovely. I’ve been an idiot, and the new story is a grand adventure.

Athena Voltaire is Indiana Jones meets Agent Carter meets Amelia Earhart. She can fly a plane, do slight of hand, is a dead shot, and in a pinch can punch your lights out. She looks good doing it, too, but that’s not her fall-back defense. The fact that she’s beautiful is like Clark Gable being handsome – it’s just a part of her. She tends to dress modestly, and even though her work clothes include form-fitting pants, you can tell she dresses for functionality and not for glamour. The whole thing feels like an old black and white movie, but a bit more sophisticated. It’s a serial for modern times, but not losing all the good of the past.

The story starts with Athena attempting to acquire a relic for her sometime employer Cane Foster (a nod to another fictional character – Charles Foster Kane – both based on the real-life newspaper baron William Randolph Hearst) and having to destroy it instead. Her employer is disappointed, but understanding. She also shows her insight and intelligence in that she knows several “coincidences” that happened weren’t so coincidental. She goes on to a movie premiere – an Athena Voltaire adventure! – and then takes the male lead from the movie with her to visit her father, the Great Voltaire. At her father’s house, they learn the legend of the Volcano Goddess, who burned the land with her lava tears, which are now the only way to gain entrance to the Hollow Earth, the home of the mystically gifted Vril-Ya, Suddenly, men are invading the house of Voltaire, and the adventure begins.

Bryant tells a good story, understanding his genre perfectly and drawing it out in a dynamic and arresting way. It’s good enough that, like an old movie, you forget that your reading a comic book because the characters are your wish list of interesting friends.  He’s really got that combination down of being a great storyteller:  Great writing combined with fantastic art, and all of it looking effortless.

This is only the first part of this installment of Athena Voltaire, and there’s never a shortage of adventure. So many questions still need to be answered, and we’re along for the ride until they are. 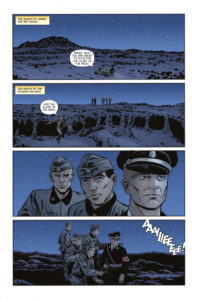 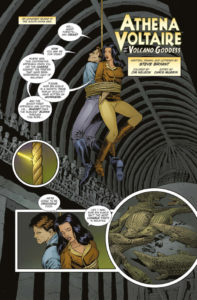 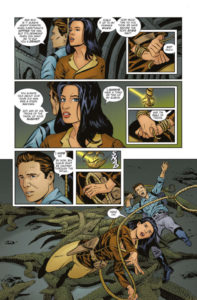