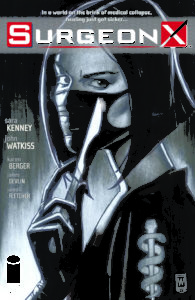 NEW SERIES — OVERSIZED FIRST ISSUE! “CUTTING LOOSE,” Part One What do you get if you cross a far-right British government with an antibiotic apocalypse and a gruesome murder? The birth of Surgeon X and her renegade practice. Extreme times call for extreme medicine. SARA KENNEY, acclaimed documentary, factual drama and animation filmmaker (Angels and Ghosts) and master artist JOHN WATKISS (Sandman, Conan, Deadman) join forces with KAREN BERGER, award-winning and Vertigo-founding editor to produce this unique, darkly comic medical thriller, which will horrify and delight in equal measure.
———-

“9 million a year dead. We must all comply with the Antibiotic Preservation Act. Rationing is rational.
The Lionheart Party
Make Britain Strong Again.”

Chaos erupts in the midst of London’s mayoral debate, between candidates for the Lionheart Party and the New Conservative Party. Okay, so maybe that’s not such a strange thing, especially considering the current political climate, but in the premiere issue of Surgeon X from Image Comics, it’s a little more dramatic than name calling and finger pointing. The hot topic of the debate is focused on the current global emergency of antibiotic resistant diseases. After decades of overuse, antibiotics have become mostly useless as common illnesses have become all but immune to their effects. The list of effective antibiotics has been whittled down to the point that the phrase “antibiotic apocalypse” has been coined, and the shortage has become a worldwide issue.

The Lionheart Party’s candidate, Jim Powell, is running on a platform of government sanctions requiring patients to meet set, and restrictive, criteria before they’re administered lifesaving and increasingly rare medicines. Conversely Dr. Dominic Obasanjo cries out against the idea of any kind of merit-based treatment requirements. The Conservative Party candidate maintains that medical professionals and not government agencies should be making life saving medical decisions, that all lives should be treated according to need as opposed to a patient’s resume’.

When the protests outside of the debate hall turn violent, the rebellious Dr. Rosa Scott finds her and her brother Lewis in the middle of it all. Ostracized by her profession for refusing to follow mandated treatment guidelines, the Scotts have set up a van as a makeshift and completely illegal ambulance. Their intent is to bring medical treatment to anyone in need using black market supplies and bypassing the establishment. What they didn’t expect was to find themselves caught in the middle of a riot. An explosion tears through the debate hall, and Rosa rushes inside to give aid. She finds the two candidates lying side by side, both injured, and she’s faced with a decision: Save fellow Doctor Obasanjo, the one voice of compassion and reason, or his opposition Jim Powell, the voice of fear mongers and Orwellian oppression. As a doctor, the choice is simple. As one forced to work outside the law for the greater good, it’s a little less so.

Image Comics has taken a topic that is tossed around like a an anecdote, and opened it up to dig into the meaty layers beneath the surface. We’re faced with many strands of previously manageable bacteria and infections, which have become more resistant to antibiotics in the face of our heavy-handed reliance on anti-bacterial hand washes and lotions. We also see the effects of governmental involvement in areas where maybe they shouldn’t be involving themselves, and it becomes fairly easy to extend that into the realm of medicine and healthcare. Let’s face it, kids, given their track record do we really want the government in charge of our medical treatment? And in Surgeon X, these topics are pulled apart, broken down into component parts, and then reassembled with an eye toward a possible end result. The imagery we’re presented with is a little staggering in its very likelihood.

Everything about this series shows a lot of promise. The characters involved are many, they’re diverse in their backgrounds and traits, and they are deep. The subject matter looks to be taken seriously, and Sara Kenney’s writing manages the feat without being too heavy handed. As Rosa is faced with a choice that no doctor should feel the need to make, her inner conflict is handled very well. Topped off with artwork from the team of John Watkiss & James Devlin, and the chaos of a riot-torn London is brought to life with a dark palette splashed in reds and yellows… Contrasting with some flashbacks that show a more reserved and well-lit environment, I saw the deterioration of a major city rolled out in stark imagery.

It’s awesome that more companies and publishers are taking on subject matter that moves away from capes and tights. Opening the comic medium up to a wide variety of genres keeps it evolving and progressing into the legitimate source of entertainment and social commentary that I always thought it should be. We don’t pass our myths, legends, and parables around the campfire these days. Now they’re all displayed in stark colors, cleverly disguised as comic books and graphic novels.

Surgeon X looks to be making a great entry into that medium, with a strong opening issue that just gives us a taste of a dystopian world we could very well see in our lifetime. Given that the FDA just called for all anti-bacterials to be removed from consumer soaps, this book almost seems prophetic. 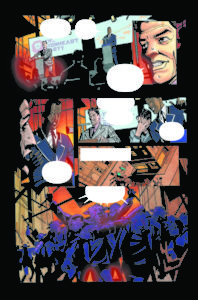 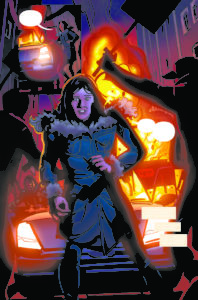 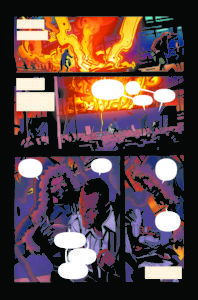 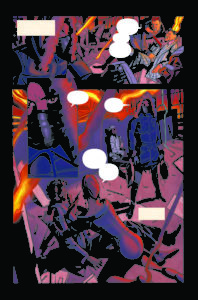 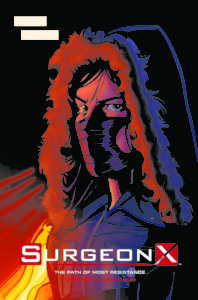