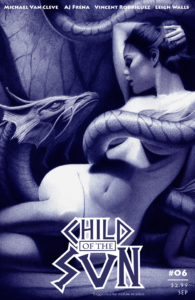 In the Throne room of Gaza, there’s a meeting of kings, where Apophis petitions for a full out attack against the people of Israel. While they might be on board with the idea, the sea kings are urging a more cautious approach. The reason behind their hesitance is the presence of the hero Samson, unequaled in strength or valor, the champion of the Israelites.

Looking for a solution to the problem that Samson poses, Apophis consults a powerful witch. Her counsel, however, brings up as many problems as it does answers. She tells them that the only way to fight the power of Samson is with the power of the Nephilim, the Children of Astarte. The problem with this idea is that if the sea kings were to wake up the surviving Nephilim, and were able to convince them to fight Samson on their behalf, what’s to prevent them from continuing on the road to conquest if they win?

As much a lesson in literature, mythology, & theology as it is a comic book series, Child of the Sun continues to blend the legends of various religions together into a pretty complex, and logistically impressive web. Previously, writer Michael Van Cleve treated us to a taste of the hate and discontent raised when the young idealist Samson got together with fellow strongman, the older and more jaded Heracles. Continuing the story, Samson is in the hot seat, with the combined might of multiple armies being directed at him. What about Samson? He’s not out of the story yet, without a doubt. He’s just… sorting through some things.

To keep things good and complex, Van Cleve has thrown in a couple side stories to keep us wondering how he’s going to tie it all together. First, we’re given the history of Lilith, first wife of Adam and widely recognized as the mother of demons. Next, the death of Gilgamesh is portrayed, raising a few more possibilities when considered with the addition of the Nephilim to the mix.

Child of the Sun remains an impressively ambitious and aesthetically well done series. The mostly black and white artwork is detailed and every bit as complex as the story itself, so much so that I thought the black and white format may have worked against it in places. On occasion, the minute details seemed to take over, making the overall picture a little tough to make out. I was so busy trying to make out the individual (and totally metaphorical) trees that it took me a bit to bring the forest (also metaphorical) into focus. Once I pieced it all together, like one of those 3D pictures you have to sort of squint at before you can make it out, it because pretty obvious that this series is above all a labor of love.

Overall, Child of the Sun is telling a huge story, like Biblically huge. What’s more, it’s as artfully done as anything else I’ve read. This issue’s 45 pages were jam packed with information from sources that seemed to have nothing much in common. As things progress, we’ll see how it all ties together. 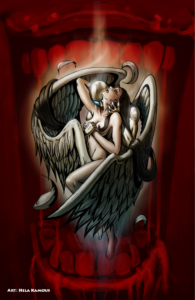