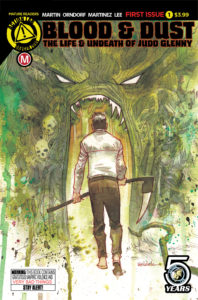 Judd Glenny is the first American vampire, once he terrorized the West as its most fearsome predator, but for more than 40 years now he’s spent his days in peace, reduced to little more than babysitter for his own vampire offspring. But when the evil that lives in the swamp surrounding the small backwater town he calls home gets ahold of one of Judd’s great grandkids, everything changes.
———-

Judd Glenny is what many would call a “hard man”, born in a bygone era and still holding to the “old ways”. It shows in the firm yet loving treatment he shows his great grandchildren. When young Zeke and his little sister Hazel get a little rambunctious & Grandpa Judd has to tell Zeke more than once to stop picking on his sister, we see a fine example of “spare the rod and spoil the child”. But instead of a rod, Judd Glenny uses a giant Bowie Knife to literally pin Zeke to the wall for an enforced “time out”. Harsh? Maybe, but then again Family Services has never had to deal with an entire family of vampires, so the rules in disciplining children tend to be a little more fluid.

Going on forty years now, Glenny’s daughter, also a vampire, has been… “sick” (I believe touched is another commonly used colloquialism…). In a great example of “never should have happened”, she turned all of her children. All vampires now, the kids will never grow up and their naturally rambunctious nature tends to take on a bit of a darker twist. Their great grandfather’s firm hand is the only thing that keeps them in check… most days.

For their part, the citizens of the small town in South Eastern Oklahoma give the Glenny Clan a wide berth. That balance serves everyone well, because as dangerous as Judd Glenny and his brood may be, there are things darker and much more dangerous lurking in the swamp of Boggy Depot. People go missing on a regular basis, usually strangers to the area because the locals just plain know better. Occasionally, children get too close to the swamp, and old Judd takes it upon himself to go in and get them back. That kind of good deed may seem out of place in a “hard man”, or maybe even a vampire, but as Judd himself explains it, “I’ve done a lot of bad in my time to live. Sometimes I gotta do some good to live with myself.”

When I cracked this one open, I had no idea what I was getting myself into… The cover doesn’t give much away, and within the first couple pages I was treated to the sight of Judd stapling a very young looking child (say around eight to ten…) to the wall with a giant friggin’ knife. It wasn’t until the little scamp reacted with nothing more traumatized than “Aw schucks, Grampa, we was just foolin’!” that I realized something a little left of center was afoot. Judd’s methods in child rearing may be a little extreme, and the imagery may bother a few of the more sensitive readers out there, but I thought the overall context worked out really well. As for Judd himself, the Glenny patriarch is an absolute throwback character. His manners are a little jagged, but for the most part he plays the gracious host… just don’t go getting too familiar.

The people at Action Lab Entertainment do a great job of mixing up their list of titles. They cover comics for every age group, very helpfully broken down into categories for easy reference (the Danger Zone being their “mature audiences” group of titles). If you want superheroes, they’ve got those aplenty (check out The Stray or Molly Danger for some classic do-goodery). If it’s some left of center science fiction/alternate history mayhem, take a look at Herald. But if you want something a little more… horrifying… look no further than Blood & Dust: the Life and Undeath of Judd Glenny. Judd’s no hero, and he sure as hell ain’t no saint, he’s just a blood suckin’ good ole’ boy making do. So long as you mind your manners and probably think twice before just stopping on by, everyone should get along just fine. 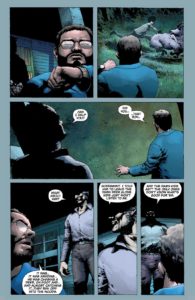 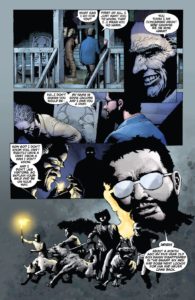 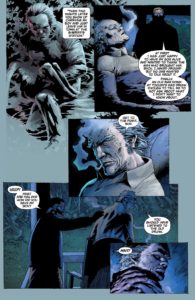