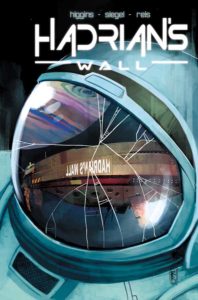 When an astronaut on HADRIAN’S WALL is murdered, pill-popping detective Simon Moore is dispatched to investigate the ship’s crew… including his own ex-wife. But if Simon’s not careful, what he finds could make the interstellar Cold War go red hot. From the creative team behind the critically-acclaimed series C.O.W.L. comes a gripping, locked room murder mystery where the secrets of everyone involved are as dark as the space that surroReis, unds them.
———-

By the year 2085, Earth has reached out into space to establish remote colonies. Profits to be made by the continued expansion have finally united the planet under the common cause, and the Antares Interspace Corporation is at the forefront of the effort. The exploratory ship, Hadrian’s Wall, is tasked with jumping into uncharted space and surveying for valued resources on behalf of Antares.

Edward Madigan, second in command of Hadrian’s Wall wakes up, suited up in full E.V.A gear and floating in space. Horror spreads across his face as cracks start to spread across his helmet’s visor, the realization that he’s about to die alone prompting thoughts of his wife and his last word. “A-Annabelle…”

Antares needs to put the “rubber stamp” to Madigan’s accidental death, and they’ve tasked Marshall Cameron with finding an independent investigator qualified to make it happen. He approaches an old friend, Simon Moore, for the job, believing him to be uniquely qualified to finish the investigation to the company’s satisfaction. As a contractor, Simon brings third party legitimacy with him, alleviating concerns over any company involvement as he looks into Madigan’s death. It also doesn’t hurt Antares’s cause that Simon pops painkillers like Pez candy, and that his ex-wife is none other than recently widowed Annabelle Madigan. She’s also a member of Madigan’s crew on Hadrian’s Wall.

Obvious complications aside, this should be a pretty cut and dried case of accidental death. Edward Madigan had a habit of suiting up and going E.V.A on his own, against company safety protocols, to handle repairs as needed. Once outside of Hadrian’s Wall, numerous factors could have resulted in the equipment failure that caused Madigan’s death.

All arguments for Occam’s Razor aside, there’s no way that this tightly wound sci fi murder mystery is going to be that simple. For one thing, that would be a very boring and very short comic. For another, I just called it a “murder mystery”, implying that Madigan’s death is anything but accidental. Hope I didn’t spoil it for anyone.

I’ll admit that I was drawn to Hadrian’s Wall by the very name… I’m not a huge history buff, but one of the stories that really interests me is the Lost Legion, assigned to the Roman outpost at the very edge of the Roman Empire. The elite Ninth Legion, out of favor with Caesar and sent to guard the Empire’s northern most border at Hadrian’s Wall… in this case an actual wall, not a spaceship. The Ninth disappeared without a trace, abandoning their posts for reasons left unknown to this day.

Hadrian’s Wall- the comic book series from Image Comics, not the ancient wall or the futuristic spaceship- has the makings of a well-crafted murder mystery. The international crew, including one colonial born and raised on Theta, includes the usual suspects: the indignant, the indifferent, and that one guy who admits that he never liked the deceased all that much (no, his name isn’t “Red Herring”). And let’s not forget the bereaved widow herself, Annabelle Madigan, who for obvious reasons didn’t want her ex-husband conducting her now-husband’s death investigation.

I like the layout and design of this book. The artwork really brought that function over form industrial feel I got from watching movies like Blade Runner and the original Alien. Also, the crew came across as pretty normal folk instead of flat plot devices tasked with carrying out linear roles. Granted, I’m a little out of touch with the current crop of police procedurals on TV, but I’m two issues into the series and have yet to spot that one suspect who fits the mold.

No alien invasions. No chest bursting xenomorphic parasites. Just an old-fashioned whodunit laid out against a science fiction backdrop. Image has come a long way from their origins, and Hadrian’s Wall is setting itself up to be a prime example of that fact.