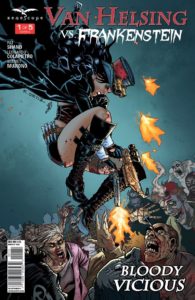 Liesel Van Helsing has dedicated her life to keeping the streets of New York City safe from the otherworldly threats that lurk in the night. However, when she teams up with a hunter who is every bit as cunning as she is, the very nature of the hunt is thrown into question. With the tables turned, and Helsing now on the run from an unstoppable foe, she must unite with the creatures of darkness if she wishes to survive.
———-

One year ago, Liesel Van Helsing closed the book on a story that has haunted her family for generations. Dracula, Vlad the Impaler, has been defeated and put to his final death. Now, a hunter in a very long line of hunters, Liesel continues on in the family tradition. With her in the fight to keep humanity safe from the things that go bump in the night are mistress of the bow and all things sharp and pointy Robyn Hood, monster hunting newlyweds Franklin and Taylor, and unlikeliest of love interests former Greek god and lord of the underworld Hades.

Fighting and killing monsters seems like a good time for this group of slayers… a lark, an opportunity to throw around knives, ammunition, and banter that seems like it could go on forever. Sadly, when times are brightest and things at their peak, life often chooses those times to bring us painful learning opportunities (just ask any Game of Thrones fan).

Franklin and Taylor believe they’re on the trail of a mythical (and vicious) Mothman, and they reach out to their fellow hunters. With Hades away on “family business”, and Robyn having no interest in this particular case, Liesel joins up with the couple for what she believes will be a wild goose chase. As the trio speak to several eye-witnesses, all describing a creature that walks like a man, but with giant wings, hideous features, and a ravenous hunger for entrails, Ms. Van Helsing starts to believe that they could be onto something serious.

As far as action horror stories go, this latest offering from Zenescope is off to a promising start. The mix of characters both mythical and relatively mundane presents an interesting set of interactions. Between Franklin’s fanboyish man-crush on Hades, Taylor’s subsequent embarrassment, and Robyn Hood’s roguish attitude, the dialogue and banter come across as both humorous and natural. Pat Shand has done a good job of showing a larger than life group of monster hunters as more or less normal people… you know, when they aren’t slaying hell fiends or doing Greek god stuff.

The artwork by Colapietro does a great job of portraying the smaller moments in the book, paying attention to facial expressions and posture to enhance the emotions and events being written by Shand. Not to say that Colapietro’s action scenes are lacking at all… no sir, when it comes to drawing out Man vs Monster mayhem, the layouts are dynamic and detailed in all their gory splendor. Honestly, I’d say that when a panel calls for chaos and anarchy, Colapietro is one of those guys who rubs his hands together and digs in like a man ready to wolf down a ribeye steak.

If I have any criticism, it’s just in the already developed backstory that isn’t really touched on to bring new readers up to speed. This is the first issue in a run of five, and anyone who hasn’t read previous story arcs is going to be pretty far behind. With the awesome characters we did get formerly introduced to, there were still members of Van Helsing’s band that were more or less ignored. It’s unfortunate, because the two that I’m thinking of right off the bat looked like they’d be interesting people to get to know. On the other hand, this little conundrum does have me thinking about tracking down some back issues… so maybe as far as Zenescope is concerned, this is so much a problem as an excellent marketing opportunity. 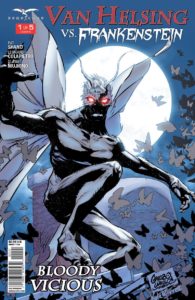 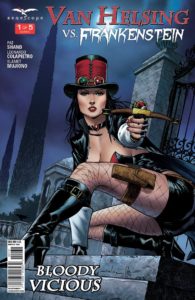 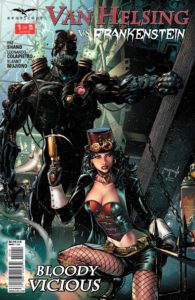