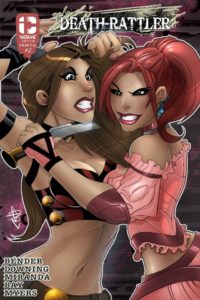 As Dawson Coles continues her quest to rid the world of the Devil’s Cross Gang, Gunner the Texas Ranger and White Tail the Native Indian tracker are hot on her trail. And that trail is leading directly towards the deadly Lady Rose, current girlfriend of the Gold Toothed Man…
———-

Dawson Coles is on the hunt, tracking the man who murdered her father, and played a more indirect but just as damning role in the death of her brother. With no name to go by, knowing him only as the “Gold Toothed man”, Dawson is working her way through his gang, the Devil’s Cross. The Devil’s Cross knows that they’re being hunted down and killed by a woman, as deadly as she is beautiful. Known as the “Death-Rattler” for her use of special bullets coated in rattlesnake venom and her signature double tap that leaves two bullet wounds placed close together to resemble a snake bite, she’s gained the attention of the gang’s Gold Toothed leader. He’s become very interested in learning both her identity and especially her motive for singling out his gang for her vendetta, and there’s a sizeable bounty for her to be brought in alive so he can find out.

On the surface, Death-Rattler is a revenge driven sci-fi Western mashup that is all about the action from start to finish. Beneath the surface, Death-Rattler is still pretty much all of those things, with no twists and turns to be found so far. It is at heart a pulp action comic, content to pull readers in based on some impressively racy cover art and determined to keep them coming back for the fast-paced, no nonsense story. Also, more impressively racy artwork.

Not to say that this a completely one dimensional comic book. While Dawson herself seems to be pretty straight forward in her motivation and intent, we’re still given a little bit of a mystery when it comes to the Gold Toothed Man. It’s hinted at that he has some deeper ties to Dawson’s family, and there’s the mystery of his identity… he’s never named and is only ever seen in shadow. For that matter Dawson’s father, one of the very subjects her revenge fueled mission, was tied to Mr. Gold Tooth and the Devil’s Cross Gang. How deeply those ties may run has yet to be revealed, but I’m sure Dawson will dig that up over the course of her killing spree.

While Death-Rattler remains a relatively linear story, one scene’s gunfight leading into the next scene’s fistfight, it is an entertaining read with some sharp humor beats thrown in for flavor. Now in the interest of full disclosure I can see some folks taking issue with the ladies’… uh… wardrobe choices. I think it’s fair to say that these creative choices were made pretty obvious on the covers of both issues 1 & 2. Anyone buying the book only to open it up and take offense at the scantily clad women (#outrage) should be hard pressed to explain how they were taken by surprise. If the wardrobe choices made in this book are going to be a problem, the simplest course of action is not to buy the book. There really is no better way to express dissatisfaction with a product, as low sales equal lost revenue and no company would be okay with that. So you’ve been warned and now know what to expect.

All that said, go into Death-Rattler with your eyes open. Obvious eye-candy aside, it does itself justice with a pulpy Wild West vibe, and with very well done action scenes. With enough titles out there to choose from, the comic book genre really does have something for everyone (including deft social commentary). Death-Rattler is entertainment at its core, without obvious pretense or higher meaning.

Think sci-fi Deadwood, but with a lot less swearing… and probably more cleavage. 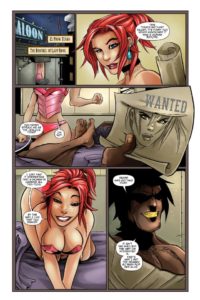 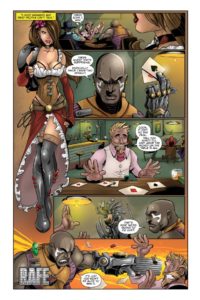 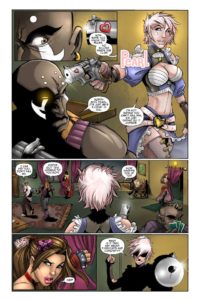