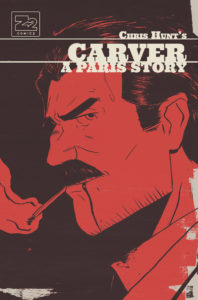 After an absence of five years, globe trotting and notorious gentleman of fortune Francis Carver returns to Paris in 1923. He has come back to aid Catherine Ayers, the wife of a wealthy Parisian socialite and the only woman he has ever loved. Her daughter has been kidnapped by the leader of a crazed anarchist gang, a man named Stacker Lee. In order to bring the girl home, Francis will have to crawl through the underbelly of the city while confronting the demons of his past, before being faced with a final choice: succumb to the man he has become, or take that mask off and be the hero he always wanted to be.

This story of pulp noir takes place shortly after World War I, and features the manliest, the pulpiest hero this side of Matt Helm (look him up, kids… or ask your Dad who that is). Francis Carver embodies the “mean sonuvabitch” in everything he does. A veteran of the First World War, the “Bloody Marine of Belleau Wood”, Carver has an answer for pretty much everything in either his scarred fists or his ever present Colt 1911. The one person who’s ever been able to claim any kind of victory over Carver was his first true love, Catherine. She’s the reason he’s come back to Paris, a romantic getaway for most, but just another cesspool full of bad memories for Carver.

Carver received a letter from Catherine claiming that she was in trouble and needed his help, and asked him to meet her in a specific café on a set date and time. Still in love with Catherine, but reluctant to let her see the changes he’d undergone during the war, Carver put everything aside and went to Paris. Arriving at the café, he found Catherine waiting for him… but not in response to the letter he received. After some conversation, Carver discovers that Catherine had received her own letter instructing her to be at the café at the prescribed time. Catherine confesses that her daughter had been missing for two weeks, and the letter claimed to be from someone who would be able to help.

All of this leaves Carver wondering who wrote the letters to each of them, but luckily he doesn’t have long to puzzle over the matter before the inevitable ambush strikes!

A Paris Story, all issues now collected in this trade paperback, reads like an old pulp novel. Its hero is quick to fight, there’s a plucky damsel in distress, a double cross the reader sees coming a mile away, even a colorfully sinister character in a mask. What it has none of are superheroes, and that’s a fine thing. Not that I have anything against super powered beings in tights, flying around and tossing cars at each other. Totally the opposite, but it’s great to see an entry in the comic book market that takes a different path. It’s definitely a path less traveled, so it really does stand apart from the crowd.

Chris Hunt has taken the pulp noir genre and embraced everything about it, both good and bad. He takes Carver and puts him through the ringer, over and over again, giving him the backbone to face his challenges and the balls to grind them to dust. Carver is a man with a dark past, nearly broken by the things he’s seen and done, desperately in need of something or someone to pull him back into the light of day. At first glance, that someone looks to be Catherine, Carver’s lost love from before the war. As we go deeper into the story, digging through the layers of secrets and plot twists to get into the meat, we find that threats don’t only come from masked men, and broken men aren’t always saved by the love of a woman.

Fans of the genre that gave us protagonists like Matt Helm and movies like Point Blank in 1967 (remade as Payback in 1999) might want to consider giving Francis Carver a look. He’s as gritty as they come, as flawed as the human psyche could possibly allow, and takes a beating that would make John McClaine weep bitter tears of surrender. 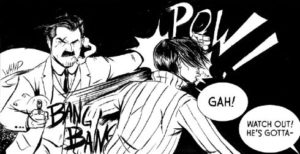