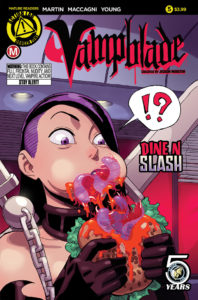 When a young comic shop employee is transformed by mystical blades into a walking talking (slicing & dicing) 90s comic book bad girl, she must quickly learn how to survive the new grotesque world the blades reveal. Now, other-dimensional parasites hidden all around us resembling the “space vampires” from the 90s comic, Vampblade, are all too real, and out for her blood!

Katie Carva continues to discover more about the Vampblades, but a girl’s gotta eat, so why not dine and slash?! Just when she thinks she’s figured out how to take on the invisible-but-deadly Glorkian face-feeders, they go and get all next level on her!
———-

Action Lab’s Danger Zone, their adult audience line (because “mature” just didn’t seem right in this context) channels everything that’s awesome about the anti-heroine fad in comics of the nineties, but doesn’t stop there. In one fell swoop, they’ve also tapped into the cult mania surrounding movies like John Carpenter’s They Live, with their spin on parasitic alien infestations… In this case, instead of a rockin’ pair of Raybans, it’s the mystically sentient Vampblades that allow comic shop employee Katie Carva to see the damn things.

With the blades in her possession, Katie can see the truth being pulled over the eyes of the populace. Those infected are up and walking around like everything’s grand, however everything is so totally not grand. The aliens in this case are giant slugs that feed off of, and control, their prey through the mouth. What Katie sees are people walking around with these disgusting maggotty things, pulsating and wriggling as they hang out of their victims’ mouths, feeding and controlling the helpless meat puppets. Luckily, that which allows Katie to see the disgusting truth also allows her to kill it. Violently. By wrapping the chains of the Vampblades around her naked body (get your head out of the gutter, it’s totally art, and completely in line with the integrity of the craft), Katie transforms into the embodiment of the evil fighting badass… Vampblade!

Before you start weeping for the poor victims, being cut down by this goddess of gratuitous violence and bloodshed, when used against a victim of the infestation, the mystic blades on kill the alien parasite is, leaving the victim confused but otherwise unharmed. And before you start thinking, “what’s the big deal? She cuts up some space worms and calls it a day,” the twist is that the aliens can manifest in more dangerous forms through their hosts, becoming something out of a manga comic, or maybe something demonic from Todd MacFarlane or Stjepan Sejic. The fighting gets down and dirty before it’s done, and the Vampblades, which also feed on the parasites they kill, get an all you can eat buffet.

This fifth issue of the series opens up the second story arc as Katie continues to learn the history of the blades, and how to use them against her enemies. We’ll also find out, just who the hell is MOM the Spaceknight… If anything about this tongue in cheek action series sounds interesting, you can also pick up the first collected volume, containing the first 148 page story arc, at ComiXology for a pretty reasonable price. Give it a look. If you don’t like what you see, I offer you a complete and total, no questions asked, no excuses made, no money back guarantee. I’ll just feel kinda bad about steering you wrong. For like, I dunno, a minute maybe… 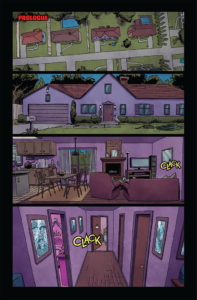 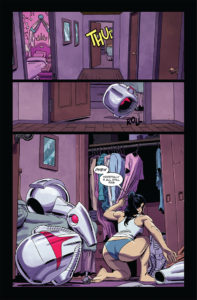 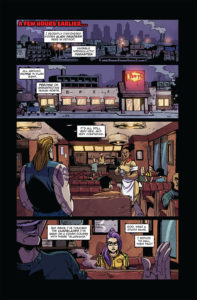 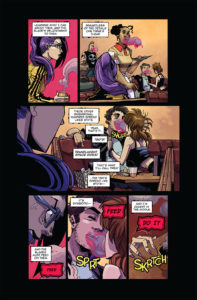 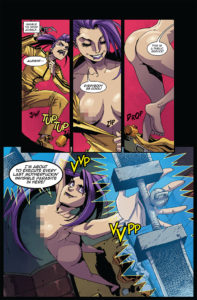 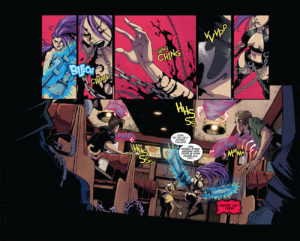 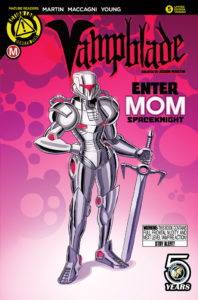 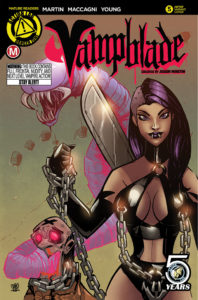 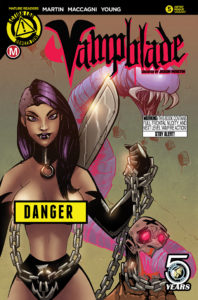 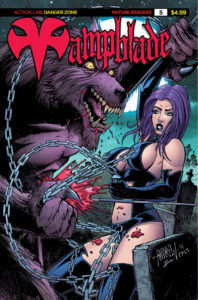 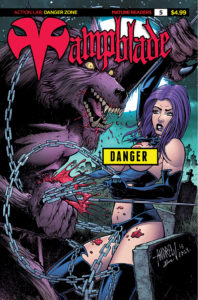