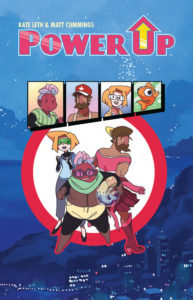 It has been foretold that four noble warriors of incredible strength would be gifted with cosmic abilities at a moment of planetary alignment…which, yeah, something definitely went wrong here. Amie is a disaffected twentysomething, Kevin is a washed-up athlete past his prime, Sandy’s a mother of two teenagers, and Silas…is a goldfish. Just a normal goldfish. Are we sure we read that prophecy right? Collects the complete limited series.

Kate Leth tells a great tale: What if the grandest power in the universe went not to those who had been preparing for years to accept it, but to four who were unaware such power (or aliens) even existed? We are brought right in to Amie’s life, the girl on her own working at the pet store. She’s named all the animals at the store, but hasn’t quite gotten the hang of people or schedules or money. She has brief interactions with a construction worker and a customer, and then BLAM! a light hits and she’s suddenly got powers! With some amazing storytelling, Leth creates a world that we can all imagine being a part of, despite aliens arriving at your workplace. Her characters are very real people, and the only overly-dramatic one is Amie’s boss. Even the aliens (the good guys, anyway) are reasonable and tolerant. Also, this book could take place anywhere in the world, because it doesn’t pinpoint any specific culture or country. The humans featured covers the spectrum, without commenting on it, which is a beautiful thing.

Matt Cummings artwork fits with the fanciful nature of the story – grounded in reality, but with a twist of whimsy. Everyone doesn’t wear the same thing every day, nor is everyone heroically perfect. The colors are bright and varied without being overdone. The space scenes are just as effective as the Earth-based scenes, with viably believable bipeds of different hues and modes of clothing. Just the exposition scenes of Amie getting ready to go out seemed as natural as those where they fight the aliens trying to kill them. The artwork definitely manga-influenced but not truly in that genre, making it relatable to all kinds of readers.

Probably my favorite thing about this story is that while it’s an all-ages story, it’s not about kids. The only children in this book are Sandy’s teen son and daughter, making this an opportunity for kids to see what sorts of adults they can aspire to become. All kinds of relationships are presented as both normal and desirable, again not even worth commenting on. Plus, who doesn’t LOVE Kevin’s armor?? Pick this up – it’s a whole story in one book – and read it with your kids. Or just read it by yourself and smile. 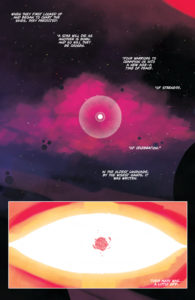 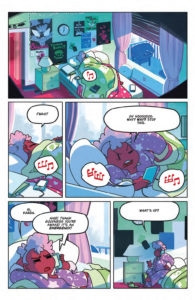 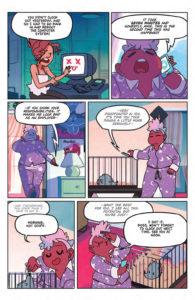 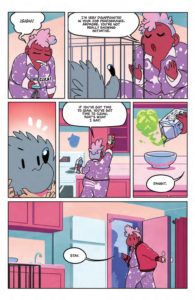 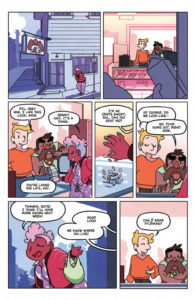 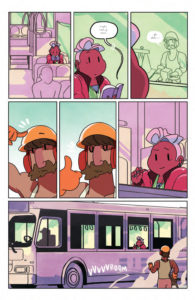 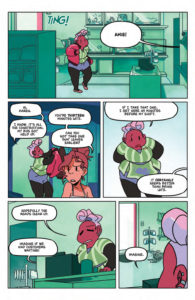 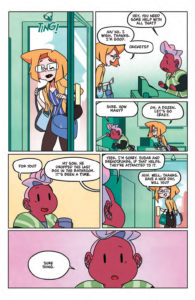 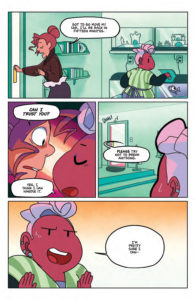 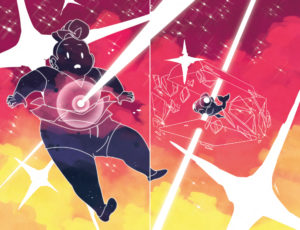