As revealed today at Gizmodo/io9o, Valiant is proud to unveil 4001 A.D.: WAR MOTHER #1 – the previously classified, self-contained one-shot launching a major new character into the future of the Valiant Universe on August 3rd! Out of the ashes of the summer’s most ambitious crossover event, join New York Times best-selling writer Fred Van Lente (IVAR, TIMEWALKER) and spectacular rising star Tomás Giorello (Conan) for a comics milestone two millennia in the making when War Mother steps out of a highly speculated-upon cameo in last summer’s best-selling BOOK OF DEATH…and into her armor-piercing full-length debut!

“Much like DIVINITY or GENERATION ZERO before her, War Mother represents a phenomenal new addition to Valiant’s formidable roster of comics icons,” said Valiant Editor-in-Chief Warren Simons. “Against the backdrop of the 4001 A.D. event, Fred Van Lente and Tom Giorello are zooming out to reveal a personal, yet incredibly action-packed story of what life looks like on the fringes of Earth two thousand years from today – and, via War Mother’s staggering debut, opening up a entirely new frontier for storytelling in the Valiant Universe. War Mother isn’t just a new character, she’s Valiant’s next great heavy hitter.”

In the 41st century, much of the planet has been reduced to a barren wasteland. New Japan orbits the Earth as a floating oasis that towers over the ashes of the old world. The survivors of this desolate new age, robbed of the planet’s once-lush natural resources, must endure great hardships to survive. Amidst the devastation, one outpost of scientific knowledge has thrived by adhering to a strict code of isolation. But even the denizens of this walled city must venture out into the wasteland to gather supplies from the remnants of what was. This task is designated to one and one alone: War Mother.

But all is not peaceful, even in New Japan. When the space-faring empire begins jettisoning city-sized sectors to Earth during the onset of a civil war, War Mother is called upon with a new mission: mega-salvage! Armed with a newly born sentient sniper rifle, War Mother is a one-woman army bent on sacking the crash-landed sector’s technology-laden debris for anything of value to her tribe. But, as calm turns to chaos, Sector 8146 will reveal a telling secret about Earth’s true order that will collide War Mother against her community, her code, and her calling…and bring destruction down upon one of humanity’s last surviving outposts of order.

“Ana is the one-woman Marine Corps for a group of settlers called The Grove – they live in the remnants of a biomaterials facility on what used to be the border between Colombia and Brazil,” writer Fred Van Lente told Gizmodo. “They’re a completely self-contained society, able to grow not just food and building materials, but a lot of their technology as well. What they can’t grow, Ana has to go out and get — from the surrounding ruins of the society they call ‘Back-in-the-Day,’ from the jungles … and, per the 4001 A.D. event, whole sectors of New Japan that are falling to Earth.”

Featuring covers by David Mack (Daredevil), Jelena Kevic-Djurdjevic (DIVINITY), Cary Nord (X-O MANOWAR), Andres Guinaldo (Justice League Dark), and Ryan Lee (Inhuman), “THE SUMMER OF 4001 A.D.” erupts into full force when acclaimed creators Fred Van Lente and Tomas Giorello take aim at the biggest comics event of the summer on August 3rd for 4001 A.D.: WAR MOTHER #1! In the tradition of DIVINITY, don’t miss a major milestone in the making as Valiant’s next great hero steps out of the shadows and into the 41st century’s most daring adventure, only in 4001 A.D.: WAR MOTHER #1!

Encompassing the core 4001 A.D. event series, the return of Valiant’s acclaimed RAI ongoing series, and four all-new one-shots revealing the future incarnations of the Valiant Universe’s most iconic heroes, “THE SUMMER OF 4001 A.D.” is the biggest and most visionary Valiant event to date – and a perfect introduction to the largest independent superhero universe in comics today.

It all starts this week in 4001 A.D. #1 (of 4) – the FIRST ISSUE of the all-new, standalone event series following Rai and the 41st century’s most formidable heroes into the fight against New Japan from New York Times best-selling writer Matt Kindt (DIVINITY II) and superstar artists Clayton Crain (Carnage) and David Mack (Daredevil)!

Then, “THE SUMMER OF 4001 A.D.” explodes with the return of Rai’s award-winning ongoing series in RAI #13 – the FIRST ISSUE of an ALL-NEW JUMPING-ON POINT revealing the origin of New Japan and its very first guardian! Discover the essential history behind the dawn of 4001 A.D. here as New York Times best-selling writer Matt Kindt (NINJAK) and acclaimed artist CAFU (UNITY) unearth the answers behind Father’s tyrannical rise to power. How did New Japan come to orbit Earth? Who created Father? And just what is Rai’s true nature…and what happened to his nine earlier predecessors that once patrolled New Japan in his stead? Discover the shocking answers as RAI #13 returns to set the events of 4001 A.D. in motion – and reveals the epic arc of the Valiant Universe’s future history!

Plus: “THE SUMMER OF 4001 A.D.” escalates even further as a staggering cast of superstar talents come aboard to reveal what the 41st century holds for Valiant’s most iconic heroes in a new series of four indispensable one-shots! Featuring X-O Manowar, Bloodshot, Shadowman, and the debut of an all-new, top-secret character with a crucial tie to the present and future of the Valiant Universe, “THE SUMMER OF 4001 A.D.” erupts into full force here with four new chapters from Valiant’s most acclaimed creators, ripped directly from the pages of 4001 A.D.:

Each chapter of “THE SUMMER OF THE 4001 A.D.” is designed for maximum accessibility and can be read in concert with the core 4001 A.D. series or stand on its own for a centuries-spanning vision of the future. 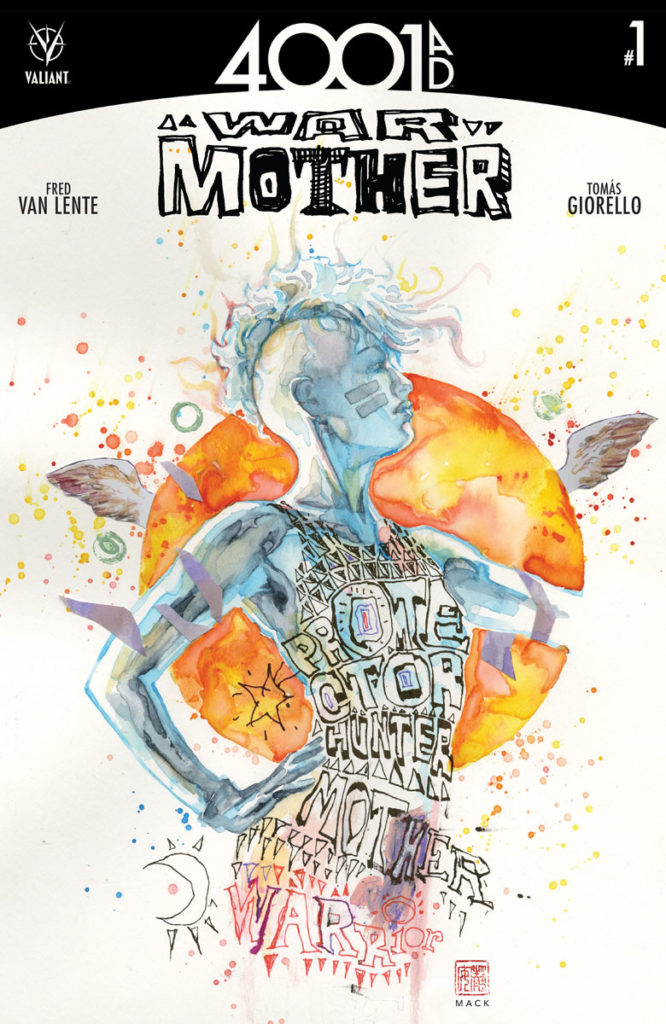 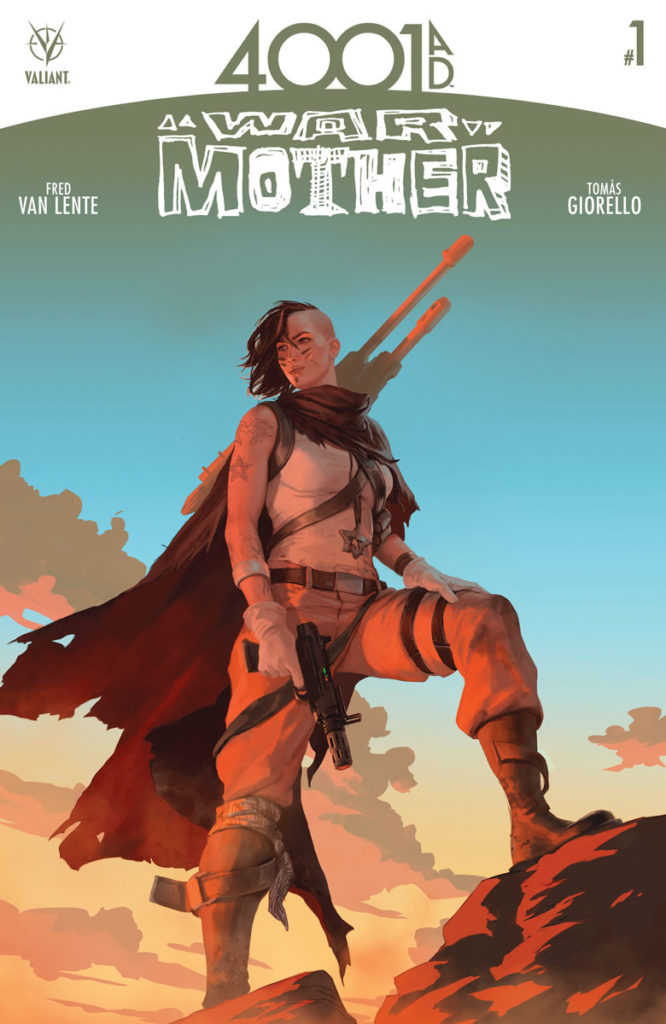 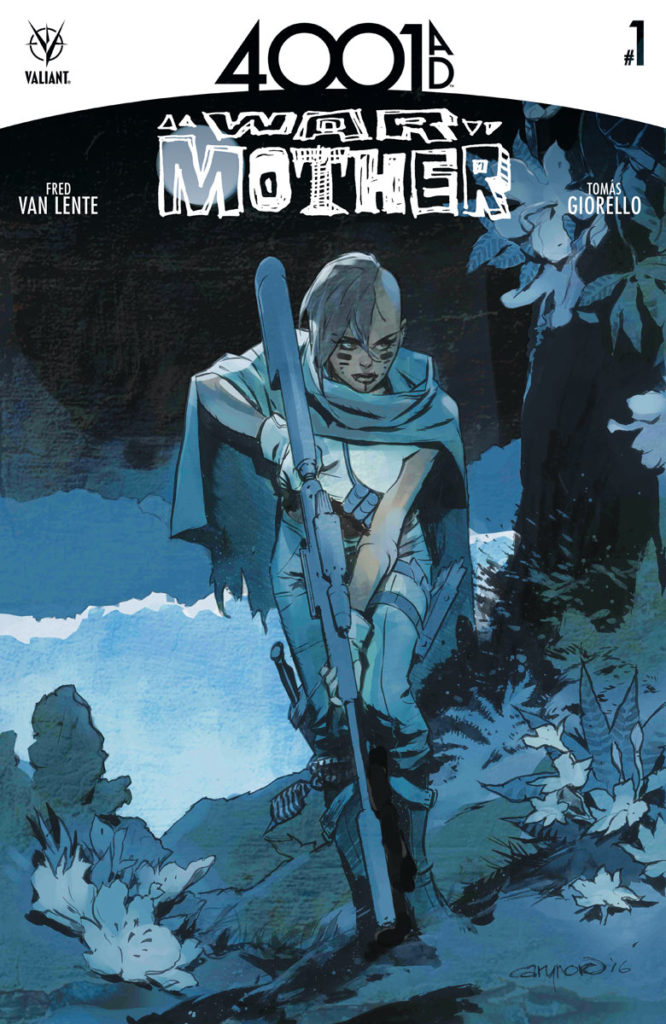 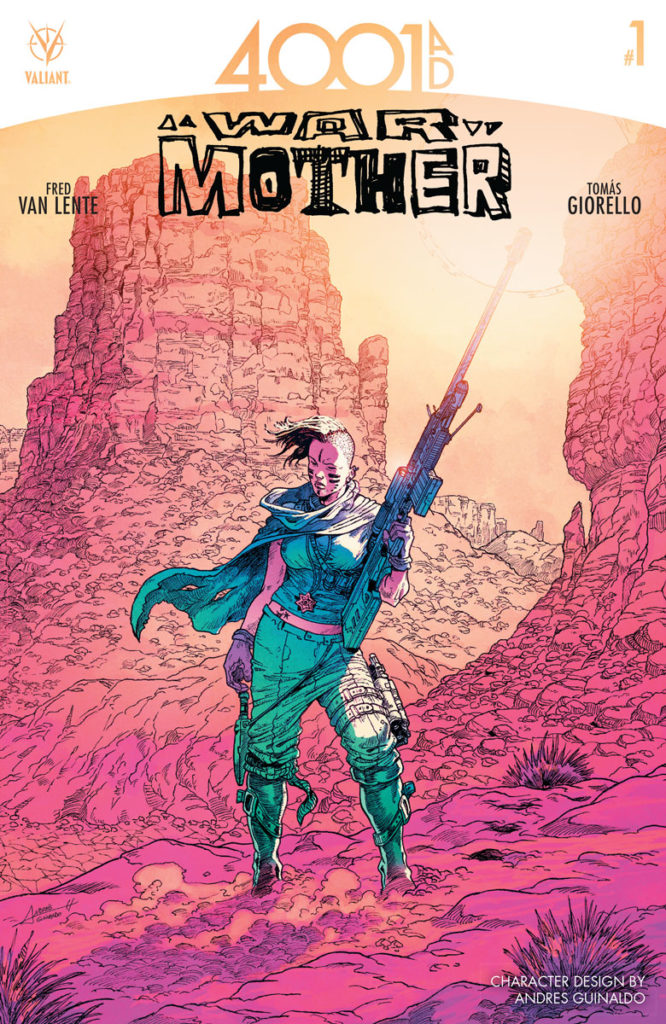 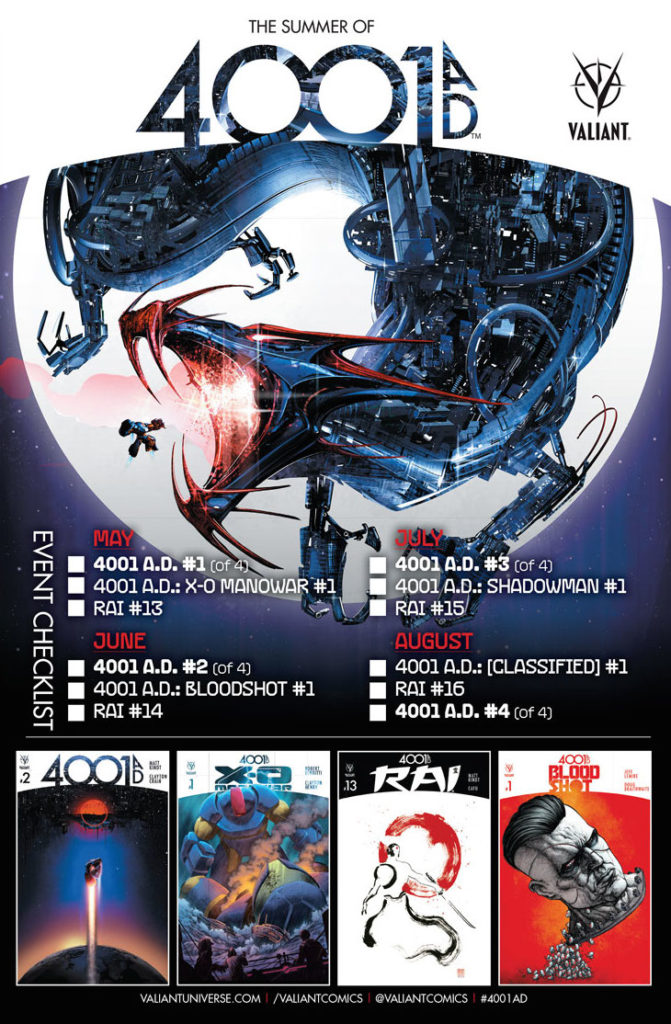 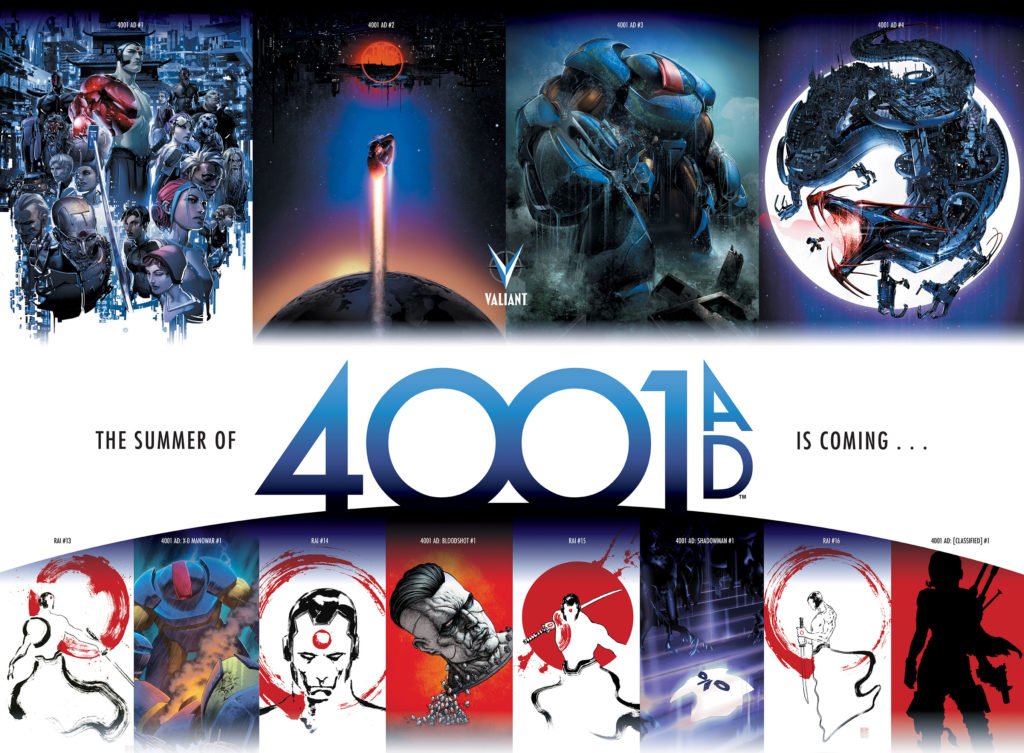