This story comes from Deadline.com 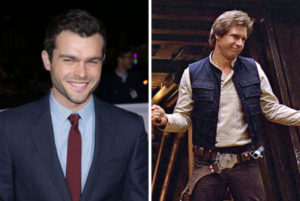 We don’t know if he’ll shoot first, but he has the job. Alden Ehrenreich will play Han Solo in Disney’s stand-alone Star Wars movie, confirming what Deadline reported exclusively three weeks ago. Sources say the Hail Caesar! star is negotiating to seal the deal.

No story details about exactly what events in Han Solo’s life prior to his appearance on screen in Star Wars: A New Hope have been revealed, but prior to Disney’s 2012 purchase of Lucasfilm, the Star Wars Expanded Universe line of books and comics saw several novels about the scoundrel’s younger days. The Expanded Universe created prior to the Lucasfilm acquisition was officially de-canonized in 2014, but elements from it have been borrowed in the Star Wars universe’s new canon, notably with certain plot points in Star Wars: The Force Awakens. It’s possible then that some of Solo’s previously established backstory may make its way back into the Star Wars mainstream.

The stand alone Han Solo film, expected to be called Han Solo: A Star Wars Story in keeping with this year’s Rogue One, is currently in preproduction under directors Phil Lord and Christopher Miller. Perhaps anticipating the confirmation of Ehrenreich’s casting, Miller commemorated yesterday’s “May the 4th” festivities by tweeting out the first official image from the production – Han Solo’s iconic blaster