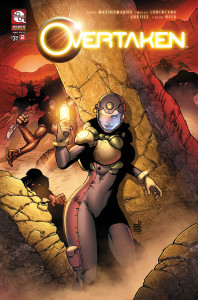 Prepare yourself for the return of – OVERTAKEN!Picking up from the shocking events of issue #1… after months of dead ends and uncooperative authorities, Will Harden focuses his desperation to find his missing wife and turns to an unlikely source to help locate her…but is it already too late?? As he begins to unravel the truth, Harden will discover that the answers he seeks are far out of this world! Written and created by Frank Mastromauro, featuring artwork by the talented newcomer Marco Lorenzana, OVERTAKEN is going to take your breath away and leave you gasping for more!

I missed the first issue of this series, and I’m a little sad about that because this second issue presents kind of an interesting spin to the sci fi abduction story. Issue two starts out with Will Harden having trouble picking up the pieces of his life, eight months after the mysterious disappearance of his wife, Jesse. On the night in question, she just never made it home. Her vehicle was found out on the highway, her normal route, with no sign of a struggle, no trace of her leaving the vehicle to be found. Despite the urging of everyone around him, including local law enforcement, Will has yet to let go and accept that Jesse is just… gone. The investigative reporter in him won’t allow it, so he keeps digging through every report he can get his hands on, including several similar disappearances that have yet to be solved.

Meanwhile, in outer space, Jessica… aka “Subject 217.14”… spends her waking moments either exploring uncharted regions on hostile planets, undergoing decontamination treatments in an isolation pod after completing a mission, or preparing for the next exploratory outing. She has no memory of her life beyond the past eight months, no idea who she is, where she’s from, or if she has a family waiting for her somewhere. Jessica just knows that she has a job to do, running errands for an organization she knows nothing about, for people she’s had no contact with except for her handler Sierra.

The writing from Mastromauro does a good job of presenting the relatively small cast of characters as they’re going about their day in their very disparate new lives. Where Will seems to struggle with nightly dreams in which he remembers his life with his wife Jesse, Jessica lives her life day to day with no memory of having ever done anything but act as an operative for her supposed employers. The artwork from Loranzana did a great job conveying large open spaces and alien landscapes, giving scope to Jessica’s far from average new life.

As a sci fi action piece, this second issue roped me in… The swing from the ordinary and familiar setting as Will searches for his missing wife, to the bizarre and alien setting as we jump to Jessica in the middle of her latest mission, is a huge shift in gears and it made the story stand out. A neat little twist at the end of the issue will ensure that not only will I be back tracking to read the first issue of the series, but also will be waiting to find out what the hell is going on in the next issue.