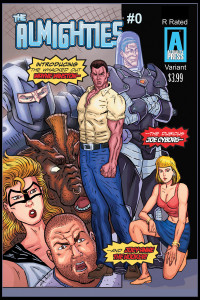 Ms. F – a former downtrodden housewife with anger issues, Mason – a mercenary with psychotic tendencies, Nite Fang – a cocky British punk/werewolf, Maxi-Tron – an armored egomaniac, and Stefanos… a guy who runs a takeout.

This bunch of misfits may not sound like the ideal ingredients for a team, but The White House’s Joe Cyborg wants them!… However, he is dubious about one of their number… though his back-up candidate seems even more questionable. Plus, Stefanos has to travel back in time to save the team’s resident Man in Black: Agent Coleslaw!
———-

Never has there been such a group of semi-heroic super agents fighting for the cause of truth and justice. Seriously, I’m pretty sure this is about as eclectic as it gets: the high tech armor clad Maxi-Tron, Nite Fang the British punk rock werewolf, the high flying and super strong Ms. F, psychopathic mercenary Mason, and… well, I’m not really sure what Stefanos does. I do know that I’ve never seen anyone fight evil with a gyro skewer, though. Yep, that’s a first. We’re introduced to the immortal Wayne Winston, able to recover from any wound and so emotionally unstable that taking up residence literally in Hell seems reasonable.

This 0 issue is a rapid fire staccato burst of individual shorts, showing the aftermath of the Almighties’ battle against killer Hitlerbot. In that battle, special agent Phil Coleslaw was killed, and the Almighties were shaken to the core. Well, Stefanos sure seems broken up about it. Moving on.

Stefanos is summoned what looks an awful lot like the White House, to be briefed on the reforming of his team. There, he meets up with Joe Cyborg. What follows is a summation of the origin stories for the group. Except, of course, for Stefanos himself. I’m not even really sure he knows what his deal is… Seriously, he fights evil with a giant tube of gyro meat on a stick. That’s it. To be fair, he seems to do it very well, but still…

So over the course of the issue, we’re introduced to the various members of the Almighties, old and presumably new, and given a brief look into their backgrounds and origins. With nods to the Marvel Cinematic Universe (Phil “Coleslaw”?) and The A-Team, I don’t really have any choice but to fall back on the word “eclectic” again. Established readers of the Almighties will probably be used to the pace, but new readers shouldn’t step in thinking that this “zero” issue is a gateway issue. What this issue does do is present a frenzied series of character shots, with references to previous Almighties adventures and rapid fire dialogue that had me in a head spin. The big win for Actuality Press is that if my reaction to this Zero Issue is any indication, people are going to buy back issues just to figure out what was going on in this one.

And don’t let the R-rating put you off at all. There’s some language that includes a couple dropped f-bombs, and a prostitute named Joey-Anne on the cover, but other than that the content isn’t much more graphic than most. If it’s something a little different that you need to fill some gap in your comic reading lives, super heroes with a tongue in cheek twist, I feel pretty safe in going out on this limb… The Almighties is odd. The Almighties is different. The Almighties is as interestingly assorted a super group as has been assembled in the pages of a comic.

Gyro meat… on a friggin skewer. 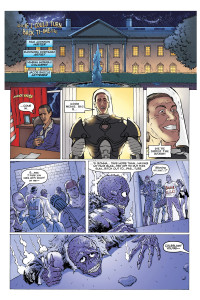 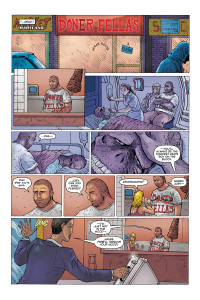 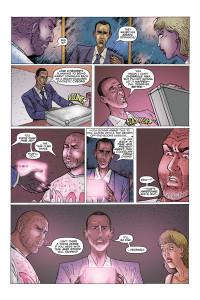 The Almighties #0 is Out Now and available at www.almightiesamass.com and www.comixology.com