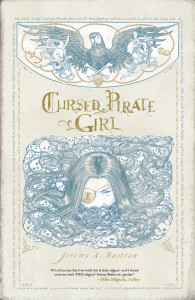 Adventures on and under the high seas lead a cursed pirate girl to encounter mythic creatures, gnarled and crusty pirates, and ghostly apparitions as she tries to find her lost father, one of the dreaded Pirate Captains of the mythical Omerta Seas. A whimsical swashbuckling tale of wonderland journeys and unimaginable dangers, starting in Port Elisabeth, Jamaica in the year 1728, and quickly heading across – and beneath – the waves.
———-

I’ll be the first person to admit that I definitely have specific preferences when it comes to the types of stories I like to read. When it comes to novels, my taste runs the range from science fiction, to fantasy, to espionage, to any combination of them all. In the realm of comic books, it’s pretty much the same, with the addition of the tights and capes crowd. I like what I like, but every once in a while something a little different comes along as sort of a palette cleanser. What we have here is most definitely something a little different. What’s been served up in these pages should by all rights find itself shelved alongside the likes of Peter and Wendy, Through the Looking Glass, and The Adventures of Pippi Longstocking.

Our story opens up in 1728, in Port Elizabeth, Jamaica. Apollonia, daughter to the local governor has led a sheltered life, never allowed to speak to the populace, or leave her residence without the presence of her father and very large bodyguard Mr. Six. This doesn’t keep her from imagining a different sort of life. Outgoing and friendly by nature (definitely not nurture… her dad’s kind of a jerk), Apollonia makes the acquaintance of a rambunctious and rowdy young lady who invites her along for a life of adventure on the high seas. While the thought does sound appealing to the young noble girl, circumstances conspire against the notion as she winds up grounded and therefore misses the appointed time of departure.

Minus her prospective traveling companion, the young renegade decides to carry on with her adventures, and the story is off and running. The Cursed Pirate Girl, which is all the name she’s seen fit to admit to, carries on with her quest to find her lost father. She doesn’t know his name, what he looks like, or why he’s been absent her entire life. What she does know is that he’s a pirate sailing the Omerta Seas. If the “Omerta Seas” isn’t something that sounds familiar to you, don’t worry. It isn’t found on any map, at least no map that you’d ever have seen.

This story is a fairy tale deserving of the name. During her travels, the Cursed Pirate Girl runs across fantastical creatures, makes some amazing friends, and manages to stay one step ahead of trouble. Accompanied by the talking parrot Pepper Dice, she finds her way to the ocean floor, to pass through the “Obscurum Obscurious” (the only way to reach the Omerta Seas). From there, her path is seriously bizarre romp, meeting the likes of the Swordfish Brothers, Sir Haftu the Magnificent and Sir Halek the Significant; the wicked, if none too bright, Captain Holly and the crew of the Pirate Ship Carrion; and a host of strange creatures and people that would be right at home in a Tim Burton movie. Through it all, the Cursed Pirate Girl jumps merrily into danger, with her wits and a hard left cross all she needs to get herself back out of it. Personally, if I were her father I think I’d be a little worried about the hellion I’d unleashed on an unsuspecting world.

This strange little world, concocted, scripted and drawn by Jeremy Bastian, is as detailed as anything you could possibly find. The writing is lyrical in its quality, and smacks of a totally believable ye olde English style without being over the top or unapproachable to younger readers. The artwork is exactly that… art. Done in black and white inks, the densely populated pages would be right at home alongside those rendered for the works of Lewis Carroll or Sir James Barrie. Even the lettering gives the look of being handwritten in a flowing sort of script, occasionally seeming to wander off on its own, refusing to be constrained to a pesky text balloon.

I’m sorry to say that this book was absolutely not done justice on the iPad I used to read my preview copy. This is a book that should be purchased in print form, held lovingly to be read as a bedtime story, and proudly shelved while it waits patiently to be read again. 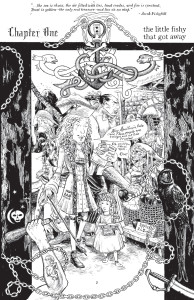 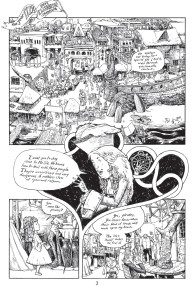 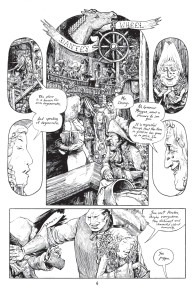 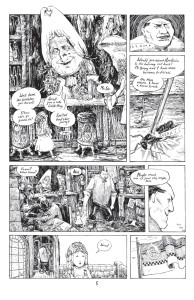 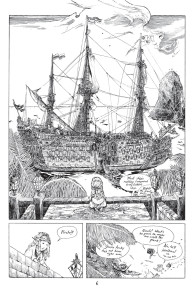 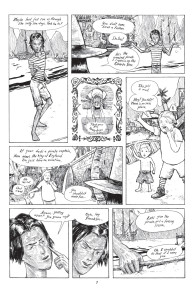 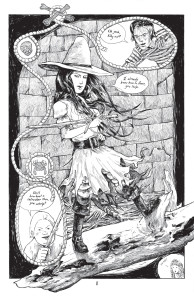 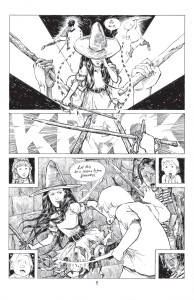 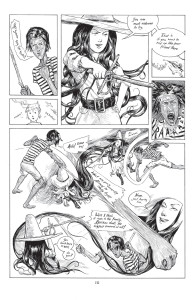 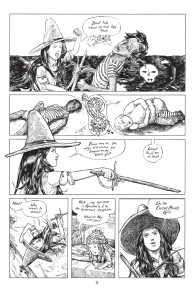