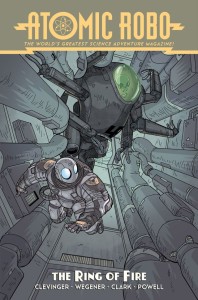 Atomic Robo Disappeared two years ago when Tesladyne was invaded by Majestic 12 and transformed into ULTRA, a task force leveraging the U.S. surveillance and military industries against “hazardous” scientific pursuits. But now, Atomic Robo’s back! And just in time too, ‘cause the giant monsters coming out of the sea are about to annihilate all life as we know it ULTRA’s plan is to nuke it into oblivion since it’ll be easier to survive a little nuclear winter than a complete extinction.

Don’t worry. Robo’s got an incredibly dangerous plan that’ll fix everything. What could go wrong!
———-

The Tesladyne science action team is split up, covering the globe in a last ditch attempt to prevent impending disaster. On the one hand, the living landmass Biomega Island is fast approaching America’s east coast. On the island is an army of giant monsters ready to sweep across the land, and an opposing force of ULTRA Titans fighting to stop them. On the other hand, the powers that be have taken into account any “acceptable losses” accrued by a nuclear strike against Biomega Island, and are moving forward with their plan. It’s up to the brainiacs of Tesladyne to keep either outcome from happening.

In the thick of it all, Atomic Robo has boarded an abandoned orbital weapons platform, left behind by the Nazi’s after World War II. His plan is to use the satellite’s non-nuclear payload of massive steel spears to launch a strike on Biomega Island from space. With the scientists of Tesladyne working with him to get the ancient targeting systems online, Robo just has to launch the “Spears of Destiny” , fight off leftover Laufpanzer zombie cyborgs, and survive re-entry into Earth’s atmosphere as the satellite falls apart around him.

The Atomic Robo series is a personal favorite of mine, and has been since I read the Free Comic Book Day issue, “Atomic Robo versus Dr Dinosaur”. From there, it’s been my mission to collect every issue I could find. For a while, there wasn’t any new content out there… until Ring of Fire. I could hardly contain my glee.

The creative team of Brian Clevinger, Scott Wegener, and Anthony Clark have put something special out into the wind. Okay, that sounds like they had some really intense chili. What I mean is that Atomic Robo is the perfect storm of comic book content. The stories are fast paced, spanning centuries as Nicola Tesla’s creation jumps from one adventure to the next, across every continent, and through time itself. Robo has fought Nazis, he’s been an explorer and an inventor, he’s even defended existence against Lovecraftian horrors from beyond reality. He’s teamed up with the likes of Carl Sagan (who Robo thinks is kind of a jerk), and Steven Hawking, and his battles against arch-nemesis Dr. Dinosaur are the stuff of legend.

Seriously, he really is that damn cool…

And so it is with very high hopes for more stories to come that I urge everyone to check this series out. It’s full of interesting and unique characters, with pithy and witty dialogue, and situations of daring-do. 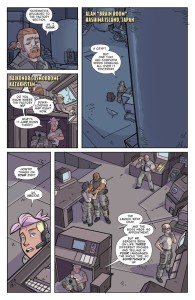 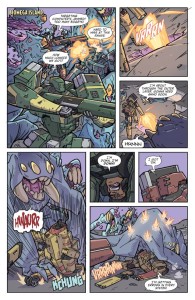 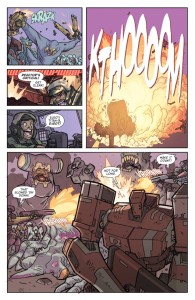