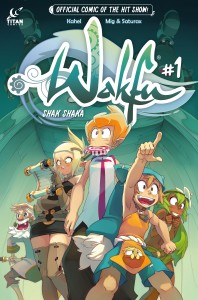 The wonderful world of Wakfu… in comics! For the first time, the colourful, wacky world of the hit series WAKFU is to be available in comics. In this first issue, the intrepid hero-in-the-making Yugo and his friends stumble across a mysterious amusement park. While the band explore, it seems that one of their number has caught the eye of the secretive and lonely Shak Shaka…

The story so far… This band of adventurers was formed to save the World of Ten from the threat of Nox, the villain who wanted to steal the powerful Wakfu of Yugo and create a weapon which could turn back time. Now, the Brotherhood of Tofu are on a quest to help Yugo find his real family. All he knows is they were last rumored to have been sighted on the mysterious Island of Oma…
———-

We join Yugo, descendent from a mythical race called the Eliatropes, bearer of mystical powers and strong in Wakfu, on his journey of discovery. In his travels, he’s attracted a group of loyal companions, and without a doubt he’ll need every one of them to see his goal fulfilled. Evangelyne the level headed warrior is the voice of reason. Ruel is a bounty hunter and tour guide by trade, miserly cheapskate by nature, and a “jack of all trades” who’s skillset will be put to the test. Pinpin, aka Sir Tristepin Percedal, aka “the White Knight”, carries the responsibility of his order, the Guardians of Shushu, and his code of honor is rivaled only by his appetite for sweets. Amalia, Princess of the Sadidas Tree People, is an adventurous spirit looking for fun. Finally, Yugo himself, found as a baby in the village of Emelko, wielder of Wakfu and determined to keep his friends together on their quest to find the Island Oma.

You heard me. Pet. Tofu.

Along the way, this Brotherhood of Tofu are waylaid when they find an amusement park that looks to be made entirely of candy! If you were paying attention, you’ll already be guessing that this gets the attention of the group, and the mighty Pinpin in particular. What the party doesn’t know is that the park is the creation of the genius Shak Shaka, and that he has plans of his own… romantic plans that include the Princess Amalia, but not her friends.

Does any of this premise sound in any ridiculous? Maybe the sort of an over the top Ritalin withdrawal induced story you’d find in a hyper spastically paced video game? Funny you should think of that, because Wakfu was originally a turn based MMORPG developed by Ankama Games with a cross platform release.

For all of the seemingly random plot devices and overly bright colors, Wakfu’s creative team strikes the right balance and pulls it all off in a pretty entertaining book. Is it geared heavily toward a younger audience? You bet. Might it be a little too much on the saccharine charged side for some readers? Ooooh, without a doubt. But all of that said, we really should be taking a look at what Wakfu does… In a genre heavily glutted with “pocket monsters”, card game playing heroes, and plot weaving villains with names that could only belong to an evil mastermind, Wakfu still manages to stand out. If it didn’t, I doubt that I ever would have given it a look.

I mean, come on… video game based manga-styled books like this aren’t generally in my wheel house. But hey, I took a chance, rolled some hexagonal dice, and was pleasantly surprised. I was rewarded with some chuckles, and didn’t bemoan the loss of the ten minutes or so it took me to read this first issue. That’s saying something… So if you have some younger readers in your household, and you’d like to find something to get involved in with them for some shared reading time, the World of Ten and its inhabitants are waiting… just don’t make them wait too long. Those hyper-active little bastards look like they lose interest quick. 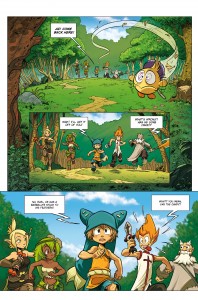 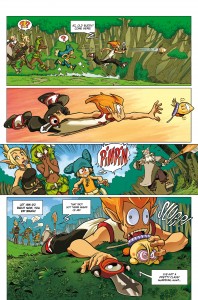 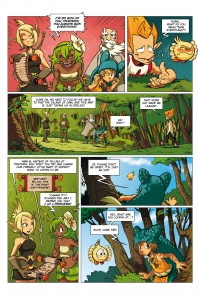