Updated weekdays at The Retros home site or at Tapastic.com.

Bob Lipski is a Twin Cities based artist who spent the last 10 years or so writing his own independently-produced comic Uptown Girl. I met Bob when he was on about issue 8. A lot can change in 10 years, and since we met he’s gotten a girlfriend, married, had a daughter, and stayed committed to his all-ages comics philosphy. So some things DON’T change.

That brings us to his web comic, The Retros. While the comic is still in its early stages, we know that the Retros are a superhero team who help the police with extraordinary situations, and they’ve just been joined by our friend Fly Girl. Maybe you rember her from the stellar FCBD mini-comic that Lipski and Bastian created a few years ago. Extra points for you if you do – it was very locally distributed.

Brian Bastian has written several issues of Uptown Girl and wrote the first 60 strips for the Retros. While the comic will never stray farther than PG-rated, Lipski states that Bastian brings “…a certain….well, edge to what I do.” He goes on to say that “Brian doesn’t really push the envelope, but he pushes mine. He brought The Retros from what I saw as a pretty hard PG world to a PG-13 world.” With that having been said, The Retros is definitely a comic that can be enjoyed by anyone of any age without having to worry about excessive violence or sex. Bastian revs up the humor and dialogue, finding that ridiculous place where we all wish we lived.

Bastian plotted the first 60 strips and wrote the first 50, with Lipski taking over writing after that point. Lipski’s art style is clear and simple, akin to Charles Schultz’s art for Peanuts, although much more dynamic than Schultz ever drew, even when Snoopy was battling the Red Baron. He does intend to compile into trades after each completed story arc, and the art is meant to look equally good with or without color. The colors are much like the rest of the art – simple and fitting to the story. Start reading, meet the team, and be charmed. 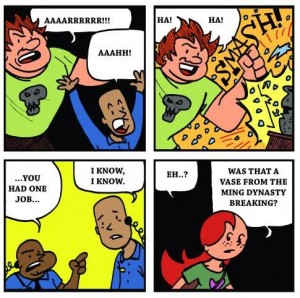 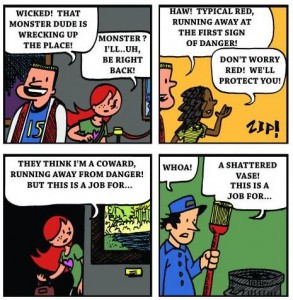 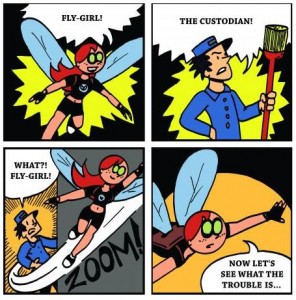 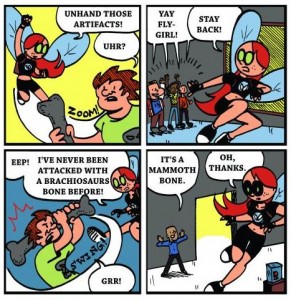