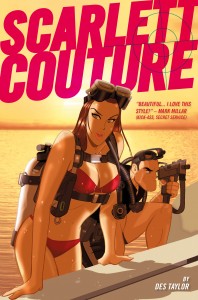 Beautiful. Intelligent. Deadly.
Scarlett Couture is all of these things, and more. She’s a spy.
Using her cover as Head of Security for her mother’s internationally renowned fashion house, she gathers intelligence for the CIA. In this explosive first issue, Scarlett follows her instincts right into the middle of the action and finds she needs to use all her wits to get herself out of hot water!
———-

What do the high fashion supermodels of Chase Couture have going for them that sets them apart from the average high fashion supermodel? For starters, more than a few of them use their good looks to compliment their other skills as special deep cover operatives for the CIA. They’re spies, putting their talents, their looks, and their ability to move in and around the most exclusive social circles of the world to keep the free world free. Headed by Chase Couture’s CEO, Chase Carver, the agency is as far reaching as any publicly recognized intelligence group out there.

When two of Chase Couture’s girls are very publicly kidnapped, there’s one person who can take up the trail… Scarlett Couture! As the head of the modeling agency’s security and personnel departments, and as the daughter of boss Chase Carver, Scarlett has all of the company’s assets at her disposal, and she’s going to use them all to discover that this is no ordinary kidnapping (like we thought it really was?). Behind the crime likes a conspiracy that goes far deeper than anyone can imagine, and it includes a weapons manufacturer, nerve toxin, evil henchmen with names like Black Jack, and hotel/casino mogul Dante Ramon. How are they all linked, and what is “Project: Stardust”?

I’d like to say that this entire series is a showcase for the amazing artwork of creator Des Taylor. I’ve been a fan of this guy’s work for a while now, and his retro/animation style never fails to impress me. An entire comic series of Taylor’s art, four issues collected together in this volume, would be a thing of beauty, and really doesn’t need anything else going for it. Right?

Wrong. While I might like to tell you that this is all about Des Taylor’s artistic style, I’m not going to because his writing is entertaining as hell… The dialogue has tongue firmly locked in cheek. In particular, Scarlett’s running “inner monologue” is great stuff. There may be cliche’s aplenty, and some groan worthy facepalms to be found, but overall I would have to say that this is a great read. You’re not going to flip through the pages and find hidden within its depths quips and quotes worthy of Shakespeare, but you will find a fast paced story very worthy of classic Ian Flemming. What’s more, I got into Des Taylor’s fight scenes, seemingly choreographed for the Big Screen by some of the best in the business. In all ways, it’s very obvious to me that he’s done some homework and that this isn’t just some hobbled together showcase for pretty pictures.

Wait, did we mention pretty pictures? 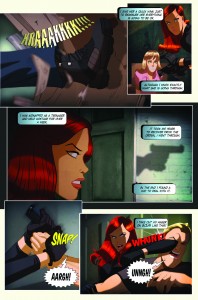 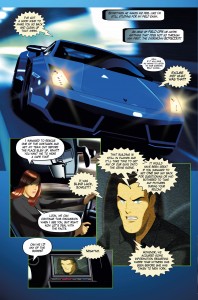 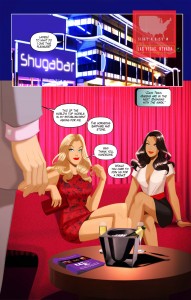 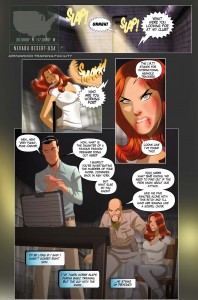