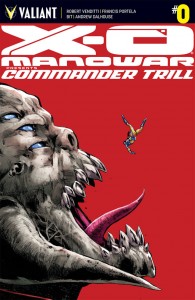 From Aric of Dacia’s escape with the X-O Manowar armor to the destruction of his own home world, pain and consequence have haunted the life of the alien general called Commander Trill. Now, on the eve of the most devastating assault yet, find out why with an essential, standalone zero issue detailing the battle-scarred life and origin of the Vine’s mightiest military leader…and an all-new prelude to X-O Manowar’s most terrifying clash of the year!

Be here as Robert Venditti (BOOK OF DEATH) and rising star Francis Portela (IVAR, TIMEWALKER) chronicle the beginning of Trill’s shattered destiny with an all-new one-shot introduction to the many worlds – and many foes – of Valiant’s most formidable hero!
———-

Years ago, Valiant launched (and then re-launched) the adventures of the noble Visigoth warrior Aric of Dacia. Taken from his home world, launched into outer space as a slave to the alien race called the Vine, his road was a rough one. Aric never submitted to his captors, suffering one punishment after another, always determined to find a way to lead his people back home. For Aric and his Visigoths, the road home began when he bonded with the Vine’s most sacred treasure, the semi-sentient power armor Shanhara. Centuries had gone by during the Visigoth’s captivity, and they returned to an earth they didn’t know at all. Aric’s efforts to give his people a home haven’t stopped, and his tenure as the Shanhara’s chosen one continues.

But this isn’t Aric’s story… This is the story of Commander Trill, a Vine leader stranded and in hiding on Earth, biding his time to strike back at Aric and claim what’s his. See, Trill believes that it’s his destiny to wear the armor, and the fact that a mere human slave has stolen it from him is the fuel to his hate-fire. With spies planted across the planet, human/Vine hybrids working in secret as Trill plots his revenge against Aric, the next stage in an ongoing war that no one on Earth knows is being waged.

This Manowar story arc starts on the Vine home world of Loam. Trill is a bright eyed young lad looking forward to seeing the sacred bonding ceremony, where the Vine’s finest warrior would lay claim to Shanhara and lead his people into a new era of conquest. That was the plan, anyway… It seems like Shanhara had other plans, though, as the Vine’s greatest warrior was reduced to screaming and begging when the armor rejected him. From then on, young Trill was convinced that he was the one destined to wear the armor, and every step he took in his life was toward that end.

So we have a jumping on point for readers new to one of Valiant’s flagship titles. The story of an ambitious young Vine gives a peek into the alien culture, some backstory on the significance of the X-O Manowar armor, and a little perspective on the fight to come. Every page shows us the determination of Commander Trill… In his mind, he’s the only one who should be worthy of Shanhara, and if the armor can’t see that for itself he’s going to be the Vine who will force the armor into submission.