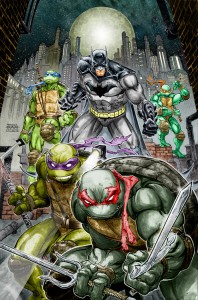 DC Comics and IDW team up for the crossover you never saw coming as two of the greatest entertainment icons meet for the first time! In Gotham City, a series of deadly raids leads Batman to believe he’s up against a group of highly trained ninjas known as the Foot Clan! Somehow, they’ve crossed over to another dimension and are determined to take advantage of the situation while looking to get back home. But they haven’t come alone: Leonardo, Raphael, Donatello and Michelangelo are hot on their trail. Get ready for excitement as heroes and villains from both worlds clash and team up in an epic battle that threatens the very fabric of reality!
———-

Mysterious happenings are… uh… happening in Gotham City. A string of robberies targeting multiple high tech labs, targeting specific components, has the Dark Knight’s attention. The injuries sustained in the robberies points Batman toward a highly trained group using the ancient martial art of Ninjistus. They struck without warning, but were interrupted by a second group of shadowy figures. Eye witness accounts reporting “inhuman” combatants, striking from the shadows and seemingly opposing the initial perpetrators pulls Batman further into the investigation.

Who are these two mysterious groups? The League of Assassins has been ruled out, as Ra’s al Ghul requires his minions to incorporate any and all styles of fighting into their operations. A group specializing only in the ancient art of the shadow warriors, the ninja, is something new to Gotham. And this second group… What’re they up to? Are they at odds with the robbers, or in cahoots? Where are they from? Why have pizza sales gone up in recent days…?

What we have here, kids, is your classic crossover series. When I first heard about it, from the twitter feed of Mr. James T. Tynion IV himself, I experienced a nerdgasm of equally epic proportions. Here was a meeting of two of my long term favorites, just when I thought the crossover had lost its edge. And for the record, I can’t imagine another pairing that would be as natural and yet completely at odds as this one. The turtles, along with enemies Shredder and his Foot Clan, have inexplicably found themselves trapped in DC’s Gotham. The laboratories and equipment they’ve targeted have been with the sole intent of getting back to where they belong as quickly as possible. What neither faction could have anticipated was the opposition they’d face.

The first issue is a great lead in. Batman is on the trail of the science stealing bandits, and orchestrates a confrontation. He’s alone, without support, against the might of the Foot Clan. With one Foot soldier left standing to answer questions, Batman starts digging… and is interrupted as his subject is killed by a shuriken. The Shredder has ensured that no secrets will be given out that night, and he warns Batman to stay out of the way.

Meanwhile, Killer Croc is moving through the sewers as he tracks Batman’s movements from down below. What he finds is a surprise, as it looks like a group of teenagers have set up some kind of crash pad beneath Gotham’s streets. There’s leftover pizza, a video game (Death Laser Pony Racers), but no kids. Not wanting any witnesses to his presence, Croc taunts the occupants, even going so far as to breaking the video game. What follows is just a taste of awesome to come…

Having first gotten on James Tynion’s comic trail in the pages of The Woods, Memetic, and his latest Cognetic (all for Boom! Studios), I was looking forward to seeing what Tynion brought to the table. His writing style is seldom, if ever, linear or straight forward, and the slow burn he’s started in the first issue of this six issue run didn’t disappoint. I think I would’ve been a little bit sad if Batman’s meeting with the Turtles had been rushed, and I really liked the switch as the fight card had Dark Knight and Halfshell Heroes facing off against each others’ enemies before ever coming face to face.

The artwork from Freddie E. Williams II is dynamic and moves very well through the action panels. We get the sense of what’s going on, even though a lot of it takes place “off the page” and in the shadows. His turtles are easily defined and identified, and not just by different colored ninja masks, and I have to say that Williams puts just the right touch of menace into the Dark Knight. This is an artist who is now firmly on my radar, and I’ll be looking forward to looking at more of his work.

Seriously, there’s no reason. At. All…. not to go out and get this book. Pick up a hard copy. Get it on ComiXology. Hell, get both! Fans of Batman and/or the Teenage Mutant Ninja Turtles couldn’t have asked for a better limited run crossover event. 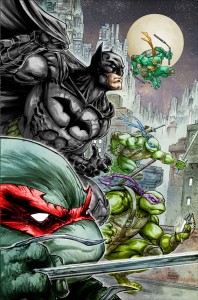 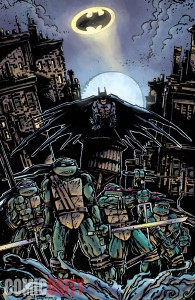