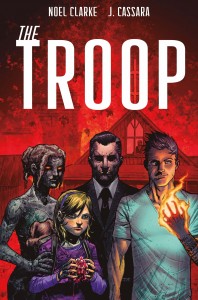 Across the planet and unknown to each other, a group of troubled teenagers lead lives of quiet desperation. But hell is about to befall them and they find their lives destroyed when they are targeted by dark forces. On the run, they discover they have unbelievable powers and must come together as The Troop!
———-

In the tradition of comic group mainstays of The X-Men and the Fantastic Four, Noel Clarke creates a story about misfits and ne’er-do-wells. With the industry full to bursting of heroes in tights creating havoc and property damage, a story needs to set itself apart from the herd. Action, we got. Grand sweeping sagas of cosmic consequence, we got that too. So how about a story that focuses on the idea of family?

This story opens on what would appear to be an idealistic family dinner in Queensland, Australia. As Stephanie and her family celebrate her father’s birthday, they have no idea that armed men on a mission are approaching. Violence ensues, the peaceful setting is shattered, and Stephanie is in a fight for her life. She’s the target of these men, and their mission is to capture her at all costs. Unknown to her family, Stephanie is special. To some, she’s a freak of nature. To others, she’s an asset to be captured and brought to heel. If she’s going to hang onto her freedom, Stephanie will have to embrace her gifts but in doing so will be saying goodbye to her family forever.

A different girl, younger still, has had a less ideal life. Her abusive father has gone to a lot of trouble to make sure that she and her mother are kept on a short leash. That all comes to an end when she’s had enough, and discovers her own ability. This ability sets her free from her situation, but it puts her on the radar of the same shadowy organization that derailed Stephanie’s life. It seems like they’re looking for, and gathering together, young people with powers and abilities, and they’re stopping at nothing to get them.

Phil is the third player introduced in The Troop’s opening issue, and he’s got his own problems. A lifetime of delinquency has led him down a pretty chaotic path, but it’s also given him the chance to harness his powers. He’s not helpless at all when he’s approached, again by men determined to capture him for their own reasons. Able to defend himself, Phil still benefits from the aid of a fourth and final player, a mysterious man who is also looking for these special young people. Bringing them all together under his protection, these three young people find themselves part of a new family. Now, if we could only find out why a powerful and far-reaching organization wants kids with power, why a lone wolf has placed himself in their way to protect these kids, and what is the source of the power that makes them all so valuable.

In the first issue, there are many more questions than there are answers. Noel Clarke has crafted a world of powerful religious zealots, mysterious men in black, and powers of unknown origin. He’s also started to tell a story of the security and comfort of family… not necessarily the family that we’re born with, but sometimes the family we’re presented with. As Stephanie, Phil, the young girl and her teddy bear, and the stranger who brought them together begin to learn, family is people brought together by circumstances outside of their control. I would have to say that the important elements of this story do come together, but it’s a little bit of a rough road at times. The perspective is split between the three young people, and it took me a bit to figure where that perspective shifts (had to figure out for myself that the text boxes for each are a different color). Some of the dialogue seems a little forced or broken, maybe because of the difficulty of conveying the thoughts and speech patterns of a globally diverse cast of characters. The art is pretty solid, showing the action without loosing too much in the shuffle, reminding me of some of the work coming from Valiant.

Overall, I would rate The Troop’s inaugural issue as one worth a look. Hopefully this creative team can get its feet under them and take off running with a pretty decent concept.

Oh, and for the record, I did catch the inside joke from Noel Clarke… mainly Stephanie sitting up in bed and reading an issue of a Dr. Who comic (he starred as Mickey Smith in a few seasons of the show). 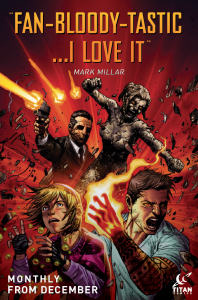 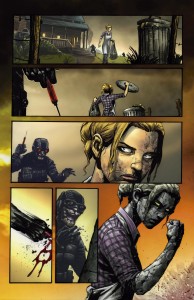 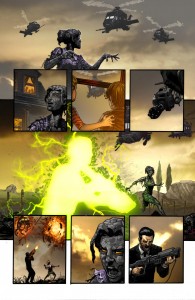