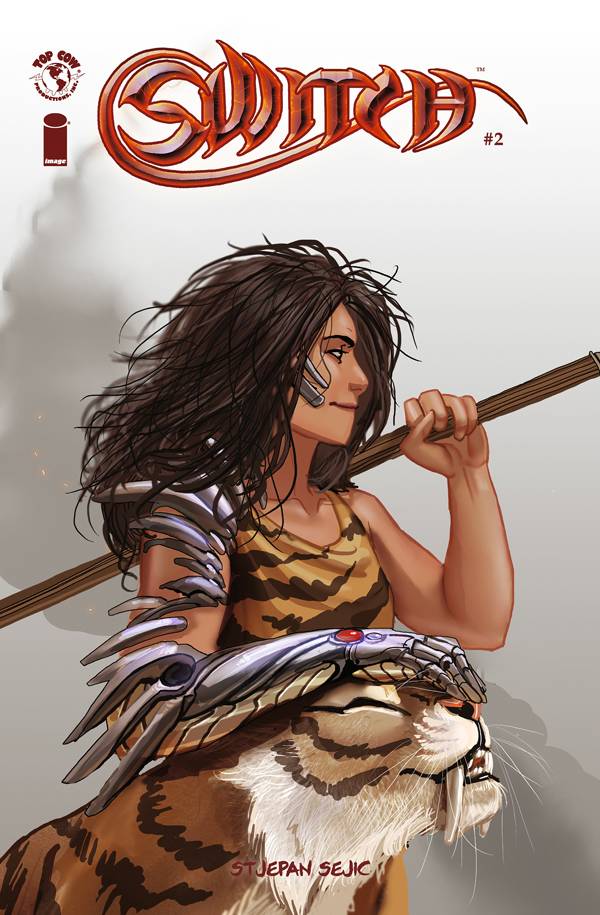 Here’s my review of Switch #2 by Stjepan Sejic, with additional work by Linda Sejic. I’ve been waiting to review this for a while, so let’s get down to it.

This time, I’ll be organizing the whole thing according to character arcs, with exception of the final scenes. This means I will start with one very famous Top Cow police officer, then move to the apparent main character, then go to the others.

We open with the aftermath of the battle in the previous issue, which was not shown in full. Surveying the scene is Detective Sara Pezzini. Fans of Artifacts mythology will remember her as the most famous wielder of the Witchblade, so her inclusion in this story is definitely welcome. She is understandably annoyed that the security grid put in place by Kenneth Irons “inconveniently” sent all of the units of the police force to the wrong part of town, rendering the location completely undefended. She seems to enjoy a different kind of police work that is less dependent on technology to tell where the cops need to go, if her comment about how the police in her father’s time used to know the streets themselves.  Something that I find particularly interesting is her complete lack of surprise at the actual crime scene, which looks less like a robbery and more like a war zone. Has she come across the Artifacts before? More on that below.

Mary (who we now have a surname for; Parker) is waking up in a hospital. Good news: Her zit seems to be gone from her forehead. Bad news: She is, as stated, in a hospital. However, she does not have any actual injuries, thanks to the healing factor brought about by the Witchblade. Regardless, she apparently lost a lot of blood, so apparently healing up wounds is not the same as restoring lost blood. Something to think on, not to mention an interesting look at a healing ability. Her talk with her father, and how he calls Tim’s guardian “Lana” makes me wonder if the woman is he biological mother, not that it matters. After she gets over her fear for her little brother, Tim, Sara Pezzini’s talk with her is extremely understanding. After hearing about Krono, the only thing that Sara actually is surprised about is that the talk about Krono is corroborated by other witnesses, instead of the validity of the talk. Most intriguing of all is the fact that Detective Pezzini doesn’t question her talk about a metal gauntlet for a second, outside of a slightly disbelieving look. Has she come across the Witchblade before, or is she just that understanding? Given the fact that the story of the Witchblade recently ended in issue 185 of her own comic, it could be that this is a true sequel… but then comes the new information about the Darkness in the previous issue (see my review there for details).

I enjoyed Mary’s arrival at home, and the interaction with the understandably terrified Tim helped to put perspective on her new power. Zala the Twilight Empress was apparently extremely dangerous, not to mention brutal. I admit to not knowing everything about the minions of the Artifacts, namely what happens when most of them die outside of being placed in darkness or sunlight, but from the sounds of things and how there was no evidence of Krono’s existence at the crime scene, she appears to not only have brutally killed him, but also left absolutely nothing behind whatsoever. In that respect, I can’t help but understand how Tim, who knows even less than Mary about what happened, would be horrified at what his big sister had done. The later moment when Tim came to his sister’s bed and curled up under the covers with her was very sweet, helping to gain more sympathy between the two of them in case any had been lost in their fight. They are still brother and sister, even with everything else going on.

Her Monday at school was very funny. The decision to not reveal the Angelus warrior (that she does not understand the significance or even identity behind) seems to get Mary a lot more attention than she would otherwise have. The discussion with Aaron interests me as well, and makes me wonder if he will end up being the same person as the part-dragon shown on the cover of the fourth issue… I assume it’s complicated. Anyway, the talk with Rudy was similar to the kind I might have with one of my own friends. Asking about something, then someone walking away because something said is too weird. Seems so human, like so many of the interactions Mary has. The joke from “A Few Good Men” also helped to make me laugh.

As a side note, thanks for introducing me to the Sumerian Annunaki tablets. I always love to hear about another mythology. Sorry I couldn’t thank you before Thanksgiving last Thursday, Mr. Sejic!

At Kenneth Irons’ estate, he’s having a talk with Sonatine, who is… shall we say “less than happy” with how their arrangement has gone. First, an Angelus Warrior (Krono) intercepts their transport. Then, the Witchblade gets intercepted by another wielder. I am interested in just how much control Kenneth Irons has over the police, considering that security grid and how he is capable of commandeering all of the footage available to construct a facial model of the new wielder. I am also intrigued by the naming of another character from older Artifacts fiction; Tau’ma, who Sonatine considers another possible associate to call upon instead of Irons if he keeps failing. He knows a lot about the Artifacts, and is on the side of the Darkness in the balance of the different powers. Last, I could not help but notice the coloration of his speech bubble when counting down from ten in anger at how badly the talk with Sonatine went. From its look, it seems like it could be just normal anger in his tone… or it could mean a secondary persona, such as those of the new wielder. Given some pre-release information related to the Arthurian legend, it could be either way, and I’m interested regardless.

Judging from the discussion about the development of the photographic facial model, Zala’s actions were undeniably brutal. She was moving too fast to easily catch on camera even before the transformation into Zala’s personality, but at that point, there is a mention of how she became covered in blood. I was surprised at the amount of seriousness Kenneth Irons shows when looking over the photographic evidence of the Witchblade. Apparently Zala is extremely infamous indeed, to the point that he seemed horrified that she has returned in some form. Could she be a significant antagonist for the series as a whole? The fact that Mary doesn’t seem to have any recollection of her gives the impression of a possible “Incredible Hulk”-like situation.

The talk with Sonatine about the facial model once it finishes made me smile. Really, without the technological expertise that Irons brings to the table, he does have a point. It would be as effective as a wanted poster, and nothing more than that, unless they had a way to pick a face from the crowd. It seems that Sandra, who is relatively okay all things considered, only knew Mary Parker by sheer luck, and if she had not, they would have needed to use the camera networks from Irons.

Last but not least is Celestine’s side of this conflict. I am happy that unlike many villains, she is willing to attack as soon as she heard of the potential conflict brought about by Mary’s acquisition of the Witchblade, and/or the emergence of Zala. Rather than let Mary learn how to defend herself, she opts to destroy her while she is relatively inexperienced, while it’s easier. It’s always nice when an antagonist follows the rules of now to be an effective villain.

Celestine’s first interactions with Mary speak volumes about her arrogance. The mere fact that she would openly admit to having sent Krono is rather stupid of her, as it would only prompt Mary to violence. However, I did like the mention of Sabine. She is an Angelus servant who is famed for having turned away from the Angelus and taken the Wheel of Shadows, an Artifact that allows the wielder to control the flow of time itself. This artifact has been all but confirmed by pre-release pictures, so it is good to hear that the most famous wielder is still around as well. I can’t wait to see the coming fight between a general of the Angelus and the inexperienced Witchblade wielder next month.

Another note: The art on this issue continues to be absolutely beautiful. Each expression is easy to grasp, each movement dynamic. I especially loved the design of General Celestine’s head, which seems extremely similar to the Angelus itself in some respects, but positively eldritch in others such as the inclusion of far too many eyes on the head. Could she be the actual wielder? Unknown, but somehow I doubt it.

I also was curious about something else: the cover of the issue was very different from the one I saw in solicitations, which included Mary and two other wielders (including Una) with Zala behind them. Was it changed? If so, I can understand why, as the conflict with Zala has not truly begun, and Mary does not even know of Zala in the first place.

Can’t wait to see the next issue!