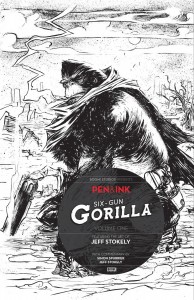 Welcome to “the Blister,” a bizarre other-world colonized by humans sometime in the 22nd century, which quickly became a hotly contested source of fertile land and natural resources long ago exhausted on Earth. In this new frontier, a rogue gunslinger and his companion wander across a wilderness in the grips of a civil war, encountering lawlessness, natives, and perversions of civilization in a world at the crossroads between the past and the future. The fact that said gunslinger is a bio-surgically modified silverback gorilla toting a pair of enormous revolvers is neither here nor there…

Calling all process junkies! If you’re as much a fan of the behind-the-scenes process of illustration as you are of the finished product, you will love this in-depth look at the making of the first two issues of the critically acclaimed Six-Gun Gorilla.

In Boom! Studios Pen & Ink series, Six Gun Gorilla is a delight. How can you not smile through the whole thing? Spurrier set up a post-apocalyptic western with nods to the US Civil War , King Kong, and reality TV. It’s quite a lot to take in, but it’s introduced bit by bit so that the reader isn’t overwhelmed. Within a few pages you are right where the main character is; taking in the absurdity of the situation in all its glory and finding only joy with the experience.

The real virture of a pen and ink series is seeing the art without color, just pencils and inks. Stokley’s art pulls you right into the story, opening like a classic western. His proud artistic moments are spectacular, especially in this format. It’s like watching a movie without a score, so that you can make up your own mind about your feelings about the story.

The other bonus is the commentary at the bottom of each page from both Spurrier and Stokely. Spurrier’s comments are a valentine to his artist. While he says a few words about bits of clever dialogue that he created, most his remarks are how well Stokely told HIS part of the story and his genius for taking direction and running with it. Stokely, in the meantime apologizes for his cruelty to animals and humans in his observations (blaming Spurrier), all while he takes glee in the spectacle he produced. They obviously liked working together and created something exceptionally entertaining for the rest of us.

Looking forward to more from Six-Gun Gorilla, and also from the Pen & Ink series. 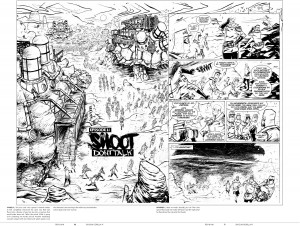